The Anatomy of a Giant Robot Duel: US vs. Japan 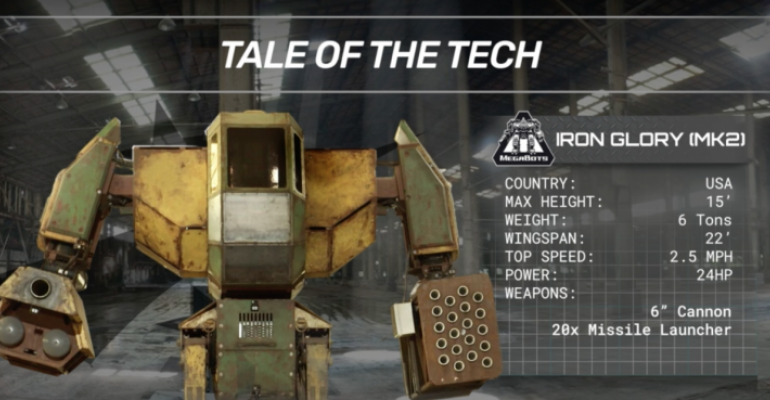 The US' MegaBots Inc. met Japan's Suidobashi Heavy Industries for the first-ever giant robot duel and gave the world a lesson in engineering, as well as the principles of in-fighting and clinch work in hand-to-hand combat.

Warning: this article contains images of both violent robot and human combat.

Some said it wouldn't happen. Others dreamed it would. And last week two teams from the US and Japan took a shot at making millions of engineers' dreams come true by hosting the first-ever giant robot battle.

Design News has written about MegaBots Inc. in the past. The company began as a successful Kickstarter campaign to fund the building of human-piloted giant robot. MegaBots were the first to do it on American shores, but after learning that Suidobashi Heavy Industries a team from Japan, the mecca of giant robots was working on a giant robot of their own, MegaBots Inc. wasted no time in laying down the challenge.Now, two years later, the teams finally met for a duel in Japan, and with over a million viewers watching the live stream, the question was would Japan, the country that invented the very idea of a giant robot come out on top? Or would American know-how take the day?

The affair, which featured a few moments that felt scripted, was nothing even approaching the intensity of Voltron, Gundam, Robotech, or any other popular anime and cartoons that inspired the giant robot craze. It didn't even match the speed and pace of the average BattleBots match. It was certainly no Robot Sumo in terms of pacing. But let's be realistic, it probably was never meant to. And despite all of this there were still some entertaining moments to be found. They even got Mike Goldberg a professional mixed martial arts (MMA) commentator to lend color commentary to the matchup.

In a previous article we noted that many of the principles that govern human hand-to-hand combat can be used just as effectively in robot competitions. And while the battle between MegaBots Inc. and Suidobashi Heavy Industries wasn't ripped right out of a scifi movie, on close examination still see some sound principles of combat in action.

This article contains spoilers for the fight, so those who would rather watch the event in their entirely can do so below (fights start around the 7:15 and 13 minute marks respectively). Fight discussion to follow.

One Punch on the Inside

While Suidobashi Heavy Industries only brought one robot, Kuratas, to the fight the team from MegaBots doubled down on its chances with two models – it's flagship Iron Glory and a newer, bigger, (and more patriotic) model, Eagle Prime.

The first match up ended without much fan fair. In the opening minutes Kuratas quickly moved in on Iron Glory and felled the other machine in a single punch.

On paper the 6-ton Iron Glory is specced out for long-range combat. With a top speed of only 2.5MPH and a focus on projectile weaponry (a 6-inch cannon and missile launcher), Iron Glory's A-game lies in keeping the other robot at a distance, gradually picking it apart with long-range shots. And while a human attempting to move in close on another human carrying a gun is extremely poor judgement, it's less so in the world of heavily armored machines. Able to withstand Iron Glory's firepower, Kuratas was able to do what any shorter fighter should do when dealing with a taller man – get to the inside of his range.

At 6' 4” and with an 84.5-inch, former UFC light-heavyweight champion Jon Jones is one of the lanker and taller fighters in all of MMA and would use his reach advantage to its full extent whenever possible. Here he is (red trunks) keeping Daniel Cormier at bay:

Faced with a height and range disadvantage, the shorter man has two general options. The more complicated is to the wait in the outer orbit and counter strike as the tall man moves in to strike.

The other, more aggressive, option is to carefully maneuver himself to the inside, creating a reversal of circumstances in which the shorter opponent is in ideal range to land his own strikes, but too close for the longer fighter to land anything of significance.

In his “Iron Mike” days Mike Tyson was an absolute master at both of these methods. Tyson would often pressure his opponents by aggressively moving in on them, intimidating them into to throwing a punch that Tyson would then avoid and counter. Tyson's less aggressive opponents would find him moving in on them quickly, getting inside of their punching range and delivering a devastating blow before they even had time to react.

Either way the result was the same – another one-punch KO for Tyson's highlight reel.

Here's Tyson showboating his ability to bob and weave his way to the inside.

Kuratas movement isn't as pretty as Tyson's, but the principle is the same – get inside and deliver the knockout. With a top speed of 18 MPH, making it roughly seven times faster than Iron Glory, Kuratas was easily able to close the distance and deliver a battering ram of an attack with its “Ichigeki fist.”

Once on its back, and with no self-righting mechanism to get it upright, Iron Glory was down for the count.

In the second battle MegaBots Inc. brought out an even bigger mech, Eagle Prime, a 12-ton, 16-foot-tall beast that would present an even larger challenge (literally and figuratively) to Kuratas. Outweighing Kuratas by nearly double, with a top speed of 10 MPH, and 430 HP (compared to Kuratas' 87 HP), Eagle Prime was outfitted with a long-range cannon, but also a logging grapple arm and a chainsaw to get that close-in work done as well.

The other advantage Eagle Prime brought over Iron Glory was pre-programmed movements, where Iron Glory was only able to move by individual motor control. This meant Kuratas would also be dealing with an opponent with faster reaction times than the previous matchup.

This time Kuratas opted for the opposite strategy, keeping an even longer distance, perhaps hoping to damage Eagle Prime with its 18-mm machine gun (it shot paintballs). When the machine gun, and what appeared to be an attempted drone attack proved ineffective, Kuratas was left with the same strategy as before, getting in close to do damage.

But with the larger Eagle Prime also equipped for close range combat the battle would come down to that often messy arena of in-fighting, the clinch.

You won't see a great deal of clinch work being done in boxing, the gloves prevent tight grips, and referees are often prone to breaking fighters apart before any “dirty boxing” can occur inside the clinch. In MMA however we see a lot more clinch work thanks to a greater variety of strikes, gloves that allow for better wrist and arm control, and a ruleset that encourages and allows for such things to happen.

For the taller fighter the clinch can be the land of nightmares – a place where his long limbs are neutralized by the proximity of the shorter fighter as well as his ability to control the taller fighter's limbs and posture. A tactic often employed by fighters in the clinch is to get your head below your opponent's, grinding or using the top of your head against the other man's chin to force your opponent into a more upright posture, where he has less leverage to deliver strong strikes and where his body and head become open for easier strikes.

When Jon Jones (right) fought Glover Teixeira (left) many thought Teixeira as the shorter man would be able to dominate the gangly Jones inside the clinch and during in-fighting. Quite the opposite happened though. By lowering his level to keep his lead below Teixeira's, Jones was able to come out on top in most of the clinch exchanges, hitting the off-balanced Teixeira with a series of punches and elbows to the body and head.

The other thing a smaller man must watch out for in a clinch is simply the weight disadvantage. The larger man can simply press his weight down on his opponent, forcing him to work harder and eventually exhausting him as he tries to get out from under him.

During their battle Eagle Prime, though the larger machine, proved itself more prepared for the in-fight. Kuratas was able to move in and land a few body shots, to little effect. And though Eagle Prime couldn't lower its level below Kuratas it was able to neuralize Kuratas' fist by controlling the arm and landing some body shots of its own via its cannon.

The first round ended as mechanical malfunction forced both robots into a stalemate inside the clinch. In the second round the MegaBots team brought out Eagle Prime's 4-foot chainsaw attachment. Kuratas employed the same infighting strategy, even attempting to take an dominant angle from which Eagle Prime would not be able to attack completely (see our BattleBots article for more on dominate angles).

But it was Eagle Prime that initiated the in-fight this time, again controlling Kuratas' fist and then going to work with its chainsaw. From there the bigger, stronger Eagle Prime was able to overpower Kuratas and deliver enough damage with the chainsaw to get the TKO.

MegaBots Inc. has always stated that its larger goal is to establish giant robot combat as a legitimate sports league. And while in part this battle with Suidobashi Heavy Industries showed that giant robot combat would definitely benefit from some rules and regulations (weight classes come to mind immediately) it also demonstrated there is a certain viability to the idea, provided the resources and budget are there. But who knows, if enough other groups get into the DIY giant robot game the tiny combatants on BattleBots could be facing some very large competition for the eyeballs of robot fight fans.

Chris Wiltz is a senior editor at Design News covering emerging technologies, including VR/AR, AI, and robotics (including the ocassional robot fight).