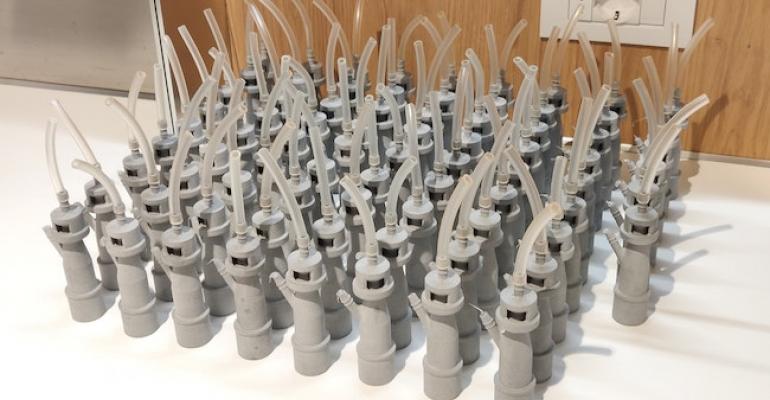 A hospital in northern Italy needed valves for its respirators but it could not source any for immediate delivery through its normal supply chain. With some help from the local community, it was able to 3D print replacement parts on site.

The death toll in Italy related to the COVID-19 pandemic reached 1,800 yesterday out of 24,747 confirmed cases. It’s the highest mortality rate in the world, surpassing China, according to Canada’s CBC News. (China had 3,200 deaths but out of 181,000 confirmed cases.) Even more people might have died in Italy, had it not been for a local newspaper editor, a caring community and the head of a technology startup with 3D-printing expertise.

A hospital in Chiari in northern Italy needed replacement valves for its respirators but it could not source any for immediate delivery through its normal supply chain, recounted 3D Printing Media Network. The editor of the local newspaper, Giornale di Brescia, heard about the shortage and contacted Massimo Temporelli, the founder of Milan's FabLab. Editor Nunzia Vallini asked Temporelli if the valves could be 3D printed, as time was of the essence. They made several calls and ultimately connected with Cristian Fracassi, founder and CEO of startup Issinova, who brought a 3D printer to the hospital, reverse engineered the valve and started printing replacement parts within hours. As of March 14, writes Davide Sher in 3D Printing Media Network, 10 patients are breathing thanks to these devices using 3D-printed valves.

The components in question are called Venturi valves and they “are impossible to find at the moment” as “production can’t keep up with demand,” Fracassi told Reuters. Named after 18th century Italian physicist Giovanni Battista Venturi, the valves connect oxygen masks to respirators used by coronavirus patients suffering from respiratory complications, said Reuters.

Responding to numerous expressions of gratitude on his Facebook page, Fracassi said that he is neither a hero nor a genius. “People were about to die, and we only did our duty” he wrote. As for being called a genius, Fracassi won’t hear of it. The genius in all of this is Venturi, wrote Fracassi, “who identified the physical principle that we only applied, as any other engineer would have. There is no genius in the piece everyone is talking about, there is only application of a physical principle.

“We simply want this story to remain only one thing: The community, made of a hospital, a newspaper, a team of professionals, made a race against time and saved lives. That's it.”