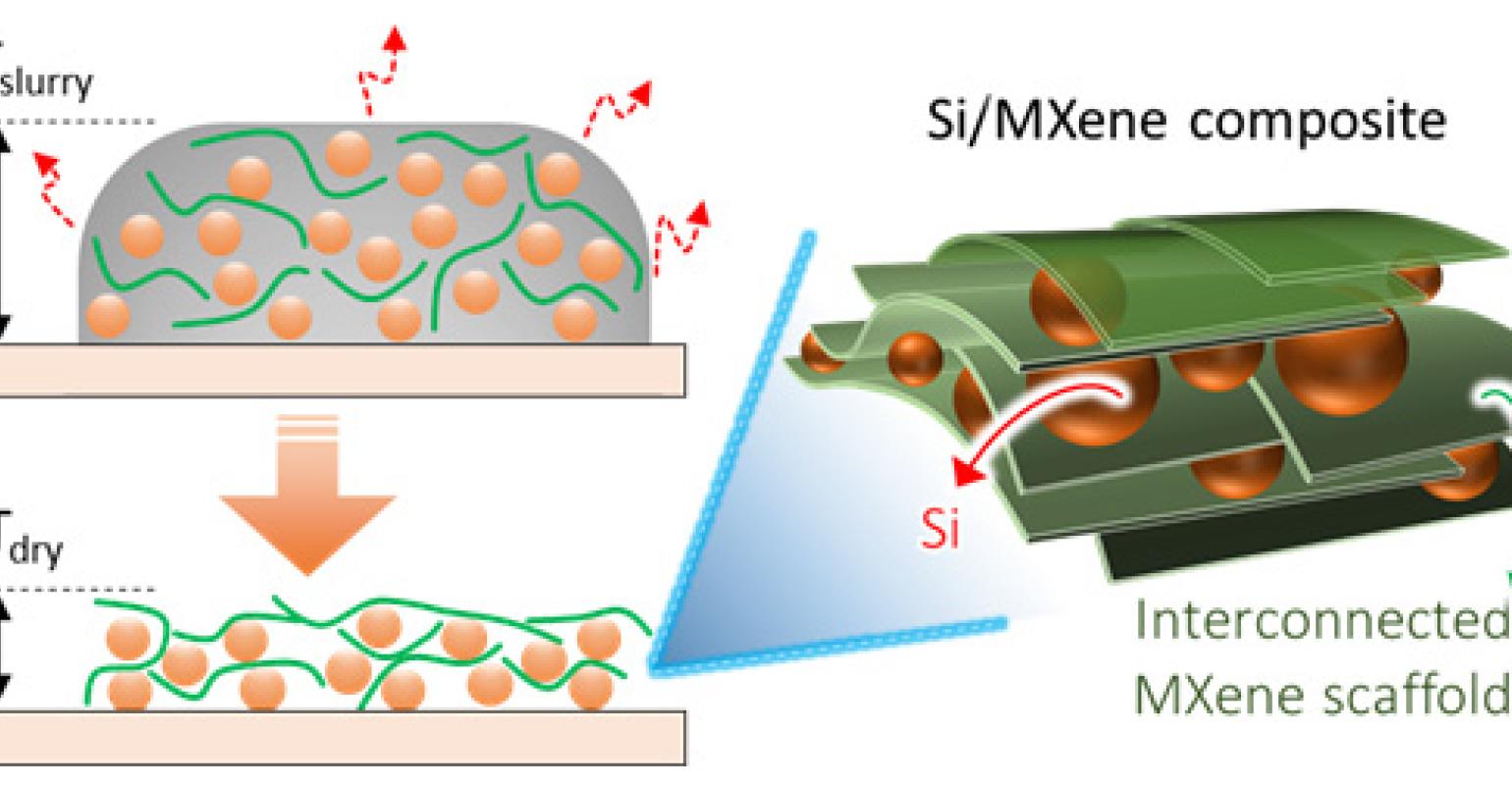 Solving a cracking problem through the addition of MXene might prove a way to increase battery capacity and performance.

Battery electrical storage is the key to future personal electronics, electric vehicles (EVs), and more efficient power grids. But present day commercial lithium ion batteries don’t provide enough energy quickly enough. So the search is on for new materials that can either enhance or replace the presently used cathodes, anodes and electrolytes that make up a lithium ion battery.

One area of particular interest is the replacement of the graphite carbon negative electrode (anode) with silicon. When a lithium ion battery is charged, lithium ions move between the layers of carbon atoms in the graphite anode in a process called intercalation. Today’s batteries use a special type of layered graphite that is limited in the amount of lithium that it can absorb, but is also only available through Chinese sources. Silicon might provide an alternative.

Silicon Could Have a Huge Impact

"Silicon anodes are projected to replace graphite anodes in Li-ion batteries with a huge impact on the amount of energy stored," said Yury Gogotsi, PhD, Distinguished University and Bach Professor in Drexel's College of Engineering and director of the A.J. Drexel Nanomaterials Institute in the Department of Materials Science and Engineering. The research was described in a Drexel news release.

The problem with silicon as an anode is that it changes volume when lithium ions are intercalated, expanding enough to create cracking after just a few charge cycles. The Drexel news release notes, “Substituting silicon for graphite as the primary material in the Li-ion anode would improve its capacity for taking in ions because each silicon atom can accept up to four lithium ions, while in graphite anodes, six carbon atoms take in just one lithium. But as it charges, silicon also expands — as much as 300 percent — which can cause it to break and the battery to malfunction.”

The usual solution to this problem involves adding carbon and polymer binders that create a framework to contain the silicon. The process for doing it, according to Gogotsi, “is complex and carbon contributes little to charge storage by the battery.”

A New Kind of Hybrid

Instead, the Drexel method mixes silicon powder into a MXene solution to create a hybrid silicon-MXene anode. According to the news release, “MXene nanosheets distribute randomly and form a continuous network while wrapping around the silicon particles, thus acting as conductive additive and binder at the same time. It’s the MXene framework that also imposes order on ions as they arrive and prevents the anode from expanding.”

MXenes were first discovered at Drexel in 2011. They are made by chemically etching a layered ceramic material, called a MAX phase. Removing a set of chemically-related layers leaves a stack of two-dimensional flakes. More than 30 types of MXenes have been produced to date, each having slightly different properties. Two of them were selected to make the silicon-MXene anodes tested in this research: titanium carbide and titanium carbo-nitride. The group also tested battery anodes made from graphene-wrapped silicon nanoparticles.

“MXenes are the key to helping silicon reach its potential in batteries,” Gogotsi said. “Because MXenes are two-dimensional materials, there is more room for the ions in the anode and they can move more quickly into it — thus improving both capacity and conductivity of the electrode. They also have excellent mechanical strength, so silicon-MXene anodes are also quite durable up to 450 microns thickness.”

In the news release, the researchers noted, “All three anode samples showed higher lithium-ion capacity than current graphite or silicon-carbon anodes used in Li-ion batteries and superior conductivity — on the order of 100 to 1,000 times higher than conventional silicon anodes, when MXene is added.”

“The continuous network of MXene nanosheets not only provides sufficient electrical conductivity and free space for accommodating the volume change but also well resolves the mechanical instability of Si,” they write.  “Therefore, the combination of viscous MXene ink and high-capacity Si demonstrated here offers a powerful technique to construct advanced nanostructures with exceptional performance.”

Silicon anodes, when perfected, are expected to expand the charge life of lithium ion batteries by more than 40%, providing longer time between charges for personal electronics and greater range for EVs. While not there yet, Drexel’s work has shown some promising potential.