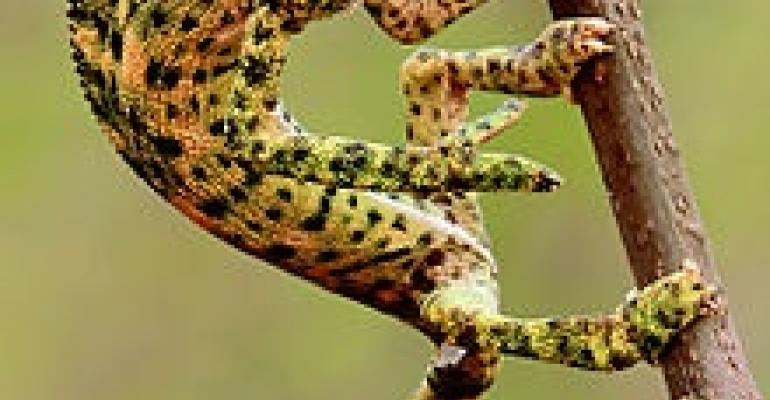 A research team in China has developed electronic skin that can change colors and has applications for wearable electronics and prostethics.

Devices like robots and artificial limbs increasingly are being developed with qualities that are similar to their real-life counterparts thanks to the work of scientists. Now the invention of artificial electronic skin that can change color by researchers in China could give these types of designs even more advanced capabilities.

The team at Tsinghua University in Beijing was inspired by animals, such as chameleons, octopus, and squid, to create the skin, using an engineering design practice called biomimicry that takes inspiration from nature. Indeed, these animals naturally have skin that can change color depending on environmental factors, a characteristic that helps the animals protect themselves from prey or hide when hunting for food.

Researchers in the past already have developed artificial skin that can change color. However, the changes typically were only visible to the naked eye when a huge mechanical strain is put on the material.

What’s different about the artificial skin that the Tsinghua team invented is that its color change can be seen with only a low level of strain, researchers said. They were able to achieve this by using the combination of a highly sensitive resistive strain sensor and a stretchable organic electrochromic device made from the material graphene.

“We explored the substrate effect on the electromechanical behavior of graphene,” Profesor Tingting Yang of Tsinghua University said. “To obtain good performance with a simple process and reduced cost, we designed a modulus-gradient structure to use graphene as both the highly sensitive strain-sensing element and the insensitive stretchable electrode of the electrochromic device layer.”

Yang is the lead author of a paper the team published about their work in the journal 2D Materials. As described in the paper, the team used graphene in its design of the skin because of its high transparency, rapid carrier transport, flexibility, and large specific surface area. Graphene is a super material of sorts for scientists because of its diversity and range of uses thanks to its nano-sized strength, light weight, and ability to conduct electricity.

It’s the last characteristic that makes the artificial skin have great potential for wearable technology, flexible electronics and electrodes, sensors, and optical devices, researchers said. Next-generation prostethetics—which often have an electro-mechanical element to provide better range of motion and movement for users—also can benefit from the invention, they said.

“It’s important to note that the capability we found for interactive color changes with such a small strain range has been rarely reported before,” Yang said. “This user-interactive e-skin should be promising for applications in wearable devices, robots and prosthetics in the future.”