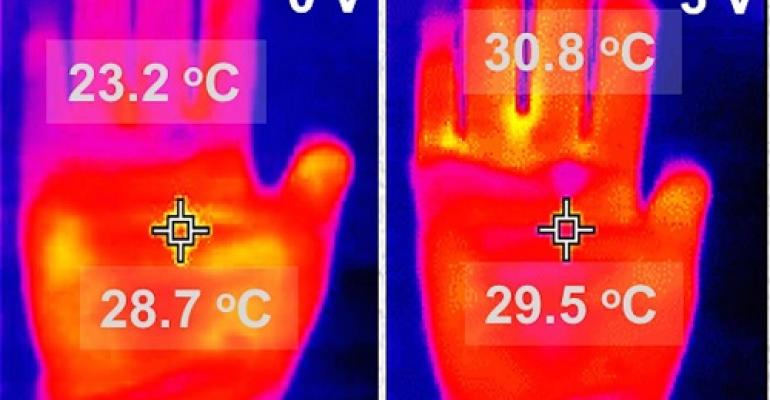 Researchers at the University of Massachusetts Amherst have developed a polymer conductive coating that can electronically heat the fingers of a glove for up to eight hours.

It’s one thing to have clothing that keeps heat trapped close to the body to help you stay warm, but what if your clothing actually could electrically heat up inside to stave off the cold?

That’s the potential for a new nano-coating developed at the University of Massachusetts (UMass) Amherst, which researchers demonstrated can be used to heat up the fingers of a prototype glove for up to eight hours.

The technology—developed by materials scientist and Professor Trish Andrew and her team at UMass—uses a vapor-coating method to coat any fiber of fabric with a metal-free conductive polymer, she told Design News.

“The conductivities of these vapor-deposited polymer coatings are higher than other polymer coatings reported to date, which allows for low-voltage heat generation,” Andrew explained. “The prototype glove that we made can warm a wearer’s hands with just 3 volts.”

The physical phenomenon that makes the technology work is called Joule heating, in which heat is generated when a small current is passed through a conductive material, she said. “When voltage is supplied—by a battery or USB power bank—to the conducting polymer-coated fabrics or fibers, current passing through the polymer generates heat, which is then retained by the underlying fiber/fabric,” Andrews explained.

Researchers published a paper on their work in the journal Applied Materials & Interfaces.

The team used a pair of cotton gloves in their demonstration, coating the fingers to allow small amounts of current to pass through so they heat up, she said. Researchers coated one layer of the three-layered glove with the conducting polymer poly(3,4-ethylenedioxytiophene), also known as PEDOT. A battery weighing 1.8 grams—less than the weight of a dime—powered the electrical heat of the glove, Andrews said.

In addition to keeping someone’s fingers warm for up to eight hours, the coating also is rugged and can retain conductivity after multiple laundering cycles and ironing, she said. “Sweaty hands do not affect the conductivity and, if the glove is ripped or torn, one can simple re-sew the glove to retain heating capability,” she added.

Not only would such a coating allow for clothing that can keep people working outside during cold weather warmer, but it also has the potential to change traditional approaches to personal thermal management, medical heat therapy, joint pain relief, and athletic rehabilitation, according to researchers.

The team’s glove is a final prototype and researchers are currently trying to commercialize the product, while simultaneously working to develop others, Andrews said.

“Our lab is working on using our unique vapor coating technology to create a plethora of other textile electronic devices, such as touch-sensitive textiles that can be used to interact with various display consoles, smart braces that quantify joint motion, and ECG-enabled undergarments for remote health monitoring,” she said.