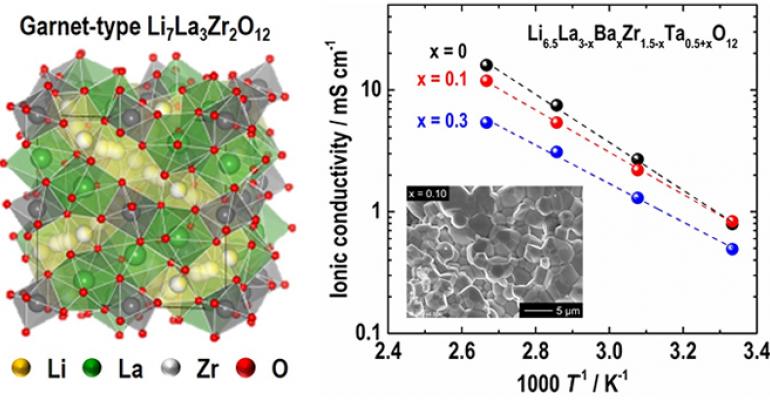 Reaching the next stage of lithium battery development requires innovation and new techniques from materials engineers and scientists.

Most battery researchers agree that the next step in advanced lithium batteries will include solid-state electrolytes. Current commercial lithium ion batteries use electrolytes composed of liquid organic solvents that are flammable. This can compromise the safety of large scale lithium ion cells, such as those used in electric vehicles (EVs) or for grid storage.

If solid-state batteries are the next big thing, what is holding them back? A team at the Toyohashi University of Technology in Japan notes, in a university news release, that a solid electrolyte must do two things. It must have high ionic conductivity (above 1 mS/cm at room temperature) and it must have good electrochemical stability (especially after many charge and discharge cycles).

The garnet-type fast lithium-ion conducting oxide developed by Inada, Li7-xLa3Zr2-xTaxO12 (x = 0.4-0.5, called LLZTO),  is a good candidate for a solid electrolyte because of its good ionic conducting properties and high electrochemical stability. Yet it has some other issues that needed to be addressed. The high-temperature sintering at 1000-1200°C that is needed for densification creates side reactions at the interface with the possible cathode materials. This prevents the option of co-sintering the solid electrolyte with the cathode.

To overcome this limitation, Inada and his team fabricated a lithium trivanadate (LiV3O8, called LVO) thick-film cathode on garnet-type LLZTO by using an aerosol deposition method. This room-temperature technique produces a film of material by impacting ceramic particles onto a substrate. Control of the particle size and shape allows a dense and thick ceramic film to be built up without any thermal treatment. By using aerosol deposition, Inada was able to add a thick-film cathode, with a thickness of 5-6 μm, to the previously sintered LLZTO oxide-based solid electrolyte. Lithium metal foil was attached to the opposite side of the solid electrolyte, forming a test battery cell.

The properties of the test cells were measured at 50°C and 100°C. At the lower temperature, a battery capacity of 100 milliamp-hour/gram (mAh/gm) was measured. At 100°C, however, the capacity rose to a promising 300 mAh/gm—about what an LVO cathode would deliver with a conventional liquid electrolyte.

The results from the Toyohashi University experiments have some significant implications. They showed that an oxide-based solid electrolyte can produce high lithium ion conduction while having good chemical stability. They also found a way to produce a thick film LVO cathode with high adhesion and good electrochemical properties when aerosol is deposited onto the solid electrolyte substrate.