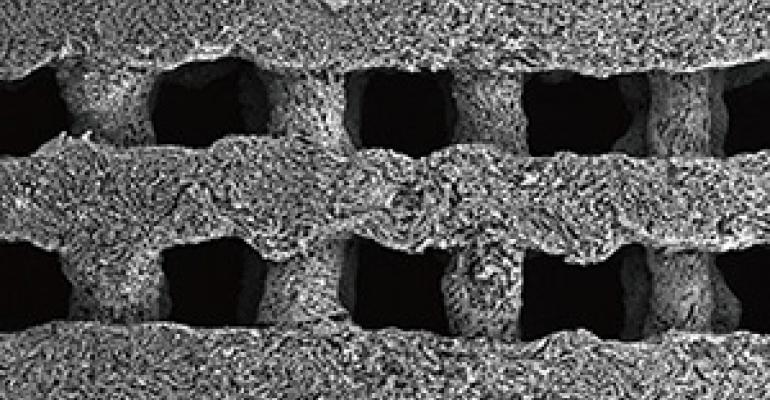 A new kind of graphene aerogel electrode pushes supercapacitors to the highest levels of performance.

A battery works by storing an electrical charge through electrochemical reaction. But that’s not the only way to store electricity. Charge storage in supercapacitors can be accomplished by one or both of two methods. In electrical double layer capacitance (EDLC), a charge is stored between two plates due to electrostatic separation of electronic and ionic charges at the electrode-electrolyte interface. More recently, a second type of supercapacitor has been developed using a principal called pseudocapacitance. A pseudocapacitor stores energy through a charge transfer or reduction-oxidation (redox) processes at the electrode surface, giving it more battery-like performance than EDLC supercapacitors.

Supercapacitors have advantages over batteries that include charging very quickly (in seconds to minutes) and an ability to retain their storage capacity over tens of thousands of charge cycles. They hold less energy in the same amount of space compared to lithium ion batteries. But the ability to rapidly accept the electrical energy produced from regenerative braking and return it in a burst of energy for quick acceleration makes them attractive in a performance electric vehicle (EV) drivetrain when paired with a battery pack. The ability of a supercapacitor to absorb thousands of charge cycles also protects the lithium ion batteries from charge and discharge extremes that can occur with regenerative braking.

"The problem for pseudocapacitors is that when you increase the thickness of the electrode, the capacitance decreases rapidly because of sluggish ion diffusion in bulk structure,” said Yat Li, professor of chemistry and biochemistry at UC Santa Cruz in a university news release. “So the challenge is to increase the mass loading of pseudocapacitor material without sacrificing its energy storage capacity per unit mass or volume," Li explained.

In earlier work, the UCSC and LLNL research team demonstrated that ultra fast supercapacitor electrodes could be fabricated using a 3D-printed graphene aerogel. In the new work, the team utilized an improved graphene aerogel and used 3D printing to build a porous scaffold, which was then loaded with the pseudocapacitive material. According to the UCSC release, “The researchers were able to increase mass loading to record levels of more than 100 milligrams of manganese oxide per square centimeter without compromising performance, compared to typical levels of around 10 milligrams per square centimeter for commercial devices.”

No Need for Stacking

In a traditional supercapacitor, a thin coating of electrode material is applied to a thin metal sheet that serves as a current collector. Increasing the thickness of the coating causes a decline in performance, as it takes longer for the charge to diffuse through the thicker coating. Therefore, current commercial supercapacitors are made from multiple thin sheets. They are stacked upon each other to build up capacitance, adding weight and material cost because of the need for a metallic current collector in each level.

Bin Yao, a graduate student in Li's lab at UC Santa Cruz, explains, "With our approach, we don't need stacking because we can increase capacitance by making the electrode thicker without sacrificing performance."

The UCSC release describes an increase in the thickness of the electrodes to 4 millimeters without any loss of performance. "The key innovation in this study is the use of 3D printing to fabricate a rationally designed structure providing a carbon scaffold to support the pseudocapacitive material," Li said. "These findings validate a new approach to fabricating energy storage devices using 3D printing."

The electrodes are designed with a periodic pore structure that enables a uniform deposition of the material and efficient ion diffusion for charging and discharging. According to the release, “The printed structure is a lattice composed of cylindrical rods of the graphene aerogel. The rods themselves are porous, in addition to the pores in the lattice structure. Manganese oxide is then electrodeposited onto the graphene aerogel lattice.”

According to the UCSC team, the new 3D-printed aerogel electrodes achieved the highest areal capacitance (electric charge stored per unit of electrode surface area) ever reported for a supercapacitor. They also showed good cycling stability, retaining more than 90 percent of initial capacitance after 20,000 cycles of charging and discharging. Partnered with lithium ion batteries in an electric vehicle (EV), these new supercapacitors could provide the burst of power needed for quick acceleration, while the battery pack provides the energy storage needed for long range.