Rapid Prototyping Is Critical to the Realization of 5G

To reap the benefits of 5G technology, researchers need a faster path to prototype.

As the world’s researchers race to define 5G, it’s clear that an increase in the spectral efficiency of a 4G network is not enough to deliver the step function in data rates, latency, and capacity needed for high-level 5G use cases.

So how do we begin to solve these complex challenges? The answer lies in prototypes and, more specifically, the kind of 5G prototypes that enable wireless researchers to test experimental ideas using real systems in real-world scenarios. When done right, these 5G prototypes can lay the foundation for rapidly increasing an organization’s time-to-market schedule.

Recognizing the large amount of speculation regarding 5G networks, the world’s standardization bodies, including the Third Generation Partnership Project (3GPP), have recently begun to transition concepts into reality. Not surprisingly, the vision painted in the International Mobile Telecommunications’ goals for 2020 (IMT-2020), as well as by the Next generation Mobile Networks (NGMN) and the 3GPP, is expansive. 5G researchers now must build the framework that will redefine our very existence -- from automobiles and transportation systems to manufacturing, energy, healthcare monitoring, and more. 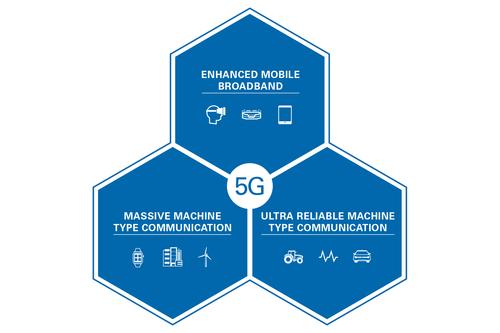 It’s clear that an increase in the efficiency of a 4G network is not going to be enough to deliver the data rates, latency, and capacity needed for 5G use cases defined by the Third Generation Partnership Project (3GPP) and the International Mobile Telecommunications’ 2020 goals (IMT-2020).
(Source: National Instruments)

Software Is Key to 5G Research
As the wireless industry evolves from 4G toward 5G, researchers face many challenges as the goals and objectives for 5G technologies are unprecedented in scope. Additionally, traditional design methods have not evolved to address these challenges. Simulations fail to accurately model the technologies or the environment, and a new approach is needed. As a result, researchers are now adopting a streamlined path to design to prototype using Application Frameworks and integrated software design radios. Application Frameworks are software reference designs that offer a rich set of high performance FPGA communications focused digital signal processing blocks for developing real-time 5G wireless communication systems. These software libraries not only give researchers an advanced starting point but enable them to modify existing 4G technology and infuse them with new ideas to achieve the overarching 5G goals including multi-gigabit data throughput, network capacity, and low-latency. When combined with software defined radios, the Application Frameworks form a complete hardware and software prototyping platform that enables researchers to accelerate their prototyping efforts and achieve results quickly. Application Frameworks are available for high throughput wireless communication applications for MIMO (including Massive MIMO), LTE, and 802.11 prototyping, which is critical as the industry races to define 5G.

To do this, researchers are adopting new design approaches to help with the challenging task of defining, developing, and deploying 5G technologies within a random access network. Most acknowledge that conventional approaches to vetting 5G technologies take too long and incur significant costs. Therefore, building a prototype and a proof of concept earlier in the process enables faster commercialization. Noting the importance of research-enabling testbeds, National Science Foundation Program Director Thyaga Nandagopal, said, “A viable prototype is increasingly the critical element to determining success or failure of a particular concept.”

Blazing a New Path Through Research

To expedite the time it takes to produce a working prototype, many researchers have adopted a platform-based design approach that embraces a unified design flow. It starts with math and simulation and then maps the algorithm in a system and working hardware.

Consider Samsung, which has built one of the world’s first demonstrators of multi-antenna technology with a base station (BTS) that includes 32 antenna elements called Full-Dimension MIMO (Multiple Input and Multiple Output) or FD-MIMO. FD-MIMO uses a 2D grid of antennas to create a 3D channel space. With FD-MIMO, service operators can place antenna grids at elevated positions such as buildings or poles and aim the antenna beams at users on the ground or in adjacent buildings to consistently deliver enhanced data rates.

Researchers at Lund University in Sweden have taken this multi-antenna concept to the next level with their Massive MIMO prototype. Massive MIMO increases the number of antennas in a cellular BTS to hundreds. Composed of low-cost technology, the grid of antenna elements focuses the energy directly at the user while enabling the hundreds of antennas to more easily detect weak signals from mobile devices. Additionally, Massive MIMO uses linear coding techniques to simplify the processing at the BTS.

The Millimeter Wave (mmWave) spectrum is plentiful and lightly licensed, and could serve as an evolutionary path for mobile networks.
(Source: National Instruments)

Fundamentally, enhanced data rates and increased capacity are constrained by spectrum according to Shannon’s theory on channel capacity. More spectrum yields higher data rates, which help service operators accommodate more users. As such, service operators around the world have paid billions of dollars for spectrum to service their customers, yet the currently available spectrum below 6 GHz is almost tapped out. Researchers are now investigating the possibility of deploying cellular networks above 6 GHz, specifically in the millimeter wave (mmWave) bands.

Worth noting is that the mmWave spectrum is plentiful and lightly licensed, meaning it is accessible to service operators around the world. Professor Ted Rappaport at New York University Wireless has been investigating mmWave as a possible evolutionary path for mobile networks since the mid-2000s. His pioneering channel measurement work has led researchers all over the world to reconsider their assumptions that mmWave mobile networks are either impractical or unfeasible.

Furthermore, researchers at Nokia are also investigating mmWave technologies, and the preliminary results are encouraging. In 2015 alone, Nokia demonstrated a fully working mmWave prototype that delivers the fastest rates ever recorded for mobile access. The Nokia prototype composed of a BTS and a UE consistently streamed data at a rate of over 10 Gbps at 73.5 GHz. Since then, the company has demonstrated a two-way over-the-air link operating at over 14 Gbps at Mobile World Congress 2016. Nokia’s achievement paints a promising future for mmWave and 5G.

The Future is Here

5G promises many exciting new developments to ultimately improve our lives through enhanced connectivity and unlock tremendous economic value. But for us to reap these benefits, researchers need a faster path to prototype. Traditional approaches have grown too expensive and time-consuming, and the world is growing impatient. A platform-based design approach promises the possibility to deliver these new developments faster, just as the researchers at places like Lund University, Nokia Networks, NYU Wireless, and Samsung are already demonstrating. It’s time to join this wave of innovation and see where it takes us next.

James Kimery is director of RF Research and SDR Marketing at National Instruments.

Can Better Depth Sensing Usher in a New Generation of 3D-aware Tech?
Sep 08, 2021