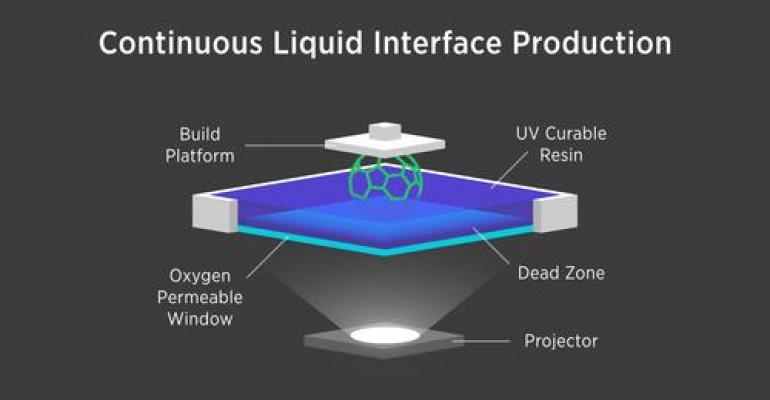 Your 3D printer is slow, painfully so. And if you ask the people at Redwood City, Calif.-based Carbon3D you aren't really even doing 3D printing anyway. Company co-founder and CEO Joseph DeSimone is fond of calling traditional 3D printing "2D printing over and over again." But Carbon3D says it has solved 3D printing's speed problem. And all it took was some inspiration from the movie Terminator 2.

Common 3D printing crafts objects layer-by-layer. Carbon3D's method does away with the layer-by-layer process entirely using a technology the company calls Continuous Liquid Interface Production (CLIP) -- a combination of UV light and photopolymerization that shapes objects continuously from a liquid pool. The result looks like an optical illusion -- less like an object being printed and more like it's being pulled out of a pool of liquid polymer -- and it puts out a final print 25 to 100 times faster than layer-by-layer 3D printing. It's a process Carbon3D has pioneered and details in a paper published in Science.

"We were truly impressed by the T-1000 from Terminator 2 and thought, could you have something arise out of puddle in a continuous manner rapidly?" DeSimone said. "It's almost a DARPA-like problem. What we were struggling with was how do we maintain the puddle while we craft the object, and how do we maintain a liquid interface?"

Drawing on expertise in polymer science and polymer chemistry, DeSimone and his team happened on the idea that oxygen can inhibit photopolymerization and prevent photopolymers from hardening when exposed to light. "That allows us to maintain the puddle as a liquid while simultaneously using light to craft it," he said. "So it's utilizing light and oxygen in a spatially controlled manner that allows to us grow these parts."

Growing objects is the best analogy Carbon3D's chief marketing officer Rob Schoeben has for the process. "We knew if we could get this process to work we could go really fast," he said. "And if we went continuously we could eliminate the layers, which are a sign of mechanical failure."

DeSimone added, "We also knew if we can go fast you could also use some advanced resin systems that you couldn't use because of slow printing. So all of a sudden we would be tackling all of the fundamental issues that have held 3D printing back from manufacturing all at one time."

Schoeben is quick to correct any notions that this is merely another take on continuous 3D printing. "The bottom line is that this is layerless, he said. "Anytime people talk about 3D printing it's always layer-by-layer; that can't be used in this context because there are no layers."

The busy end of Carbon3D's process happens underneath the printer's puddle of resin. Beneath the reservoir that holds the liquid is a composite window that is transparent to light and permeable to oxygen -- similar to a contact lens.