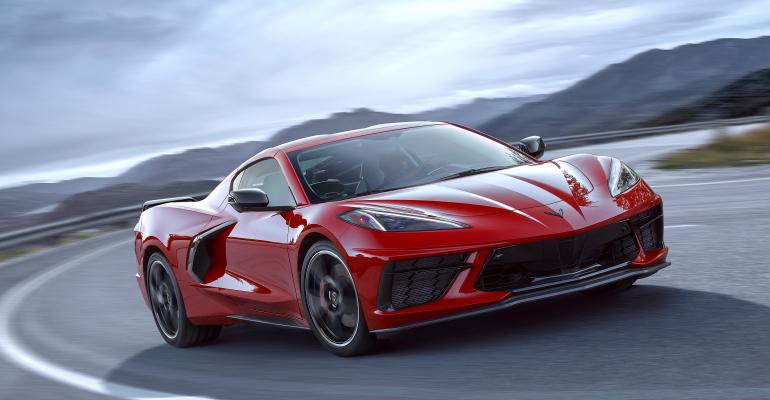 <p><em>2020 Chevrolet Corvette. Image source: General Motors Co.</em></p><p>The sexy <a href="https://www.designnews.com/automotive-0/behind-wheel-long-awaited-mid-engine-2020-chevrolet-corvette-stingray/64280203462078">Chevy Corvette</a> won more shoppers' affections in 13 states. We loved the prototype we tested on the street, and General Motors announced that production of the long-anticipated mid-engine sports car has been consumated.</p>
There's a lot more to the C8 Corvette's technology inventory than just the relocated engine.

During most of the Corvette’s 67-year history, the nameplate has been a technology leader, even if its image in that regard has dimmed in recent decades as upgrades have become distinctly incremental.

But when other super sports cars shifted to mid-engine design, starting with the Lamborghini Miura in 1966, Chevrolet’s plans to move the Corvette away from its original front engine layout have been repeatedly postponed until now. With the introduction of the eighth-generation “C8” Corvette Stingray, Chevrolet has finally fulfilled a move originally sought by the Corvette’s first chief engineer, Zora Arkus-Duntov.

This pits the Corvette, with its base price of $58,900 and a fully loaded as-tested price of $85,710, against pedigreed European rivals that cost a quarter-million dollars or more. Other competitors, such as the Acura NSX and Audi R8 only cost two or three times as much as the Corvette.

The motivation for relocating the engine behind the passenger compartment from under the hood was outlined by vehicle dynamics engineer Mike Hurley during our preview drive of a pre-production prototype on the roads outside Phoenix.

The challenge for any vehicle driving forward through its rear wheels is providing the rear tires enough traction to both accelerate and turn effectively. When the engine’s mass is at the front of the car, it makes that job more difficult. And when that engine makes Corvette-grade power, well then, the car gets the challenging-to-drive-fast reputation that was tagged to the outgoing 2019 C7 Corvette.

In addition to shifting the car’s weight balance rearward over the driving wheels, another important benefit of the redesign is that the new car’s torsional rigidity is 40 percent better than that of the old car, thanks to the engine and transaxle bolting rigidly to the chassis to anchor the rear suspension. Reducing the uncontrolled movement of the frame lets the suspension work more accurately, making Hurley’s job easier and more effective when tuning the BWI Magnaride shock absorbers.

Those shocks are unchanged from the ones on the 2019 Corvette, but now they benefit from a new, more powerful electronic controller and from the replacement of the old mechanical suspension position sensors with accelerometers. The mechanical sensors themselves are accurate enough, said Hurley, but the linkage that attaches them to the moving parts introduces play that makes small movements impossible to capture properly.

As a result, engineers couldn’t calibrate the old car to filter out the buzz from small motions as when driving over gravel, because the signal of the bumps was lost in the noise of the play within the linkage, Hurley explained. Using accelerometers at each corner (plus another one in the control unit) to measure motion directly provides much more useful data that let Hurley’s team provide a smoother ride in those conditions.

Driving on the smooth roads outside Phoenix provided no opportunity to experience the car’s ability to deal with coarse surfaces, but switching between the Touring, Sport, and Track modes did demonstrate obvious differences in the car’s response.

Touring mode makes the suspension softer and more comfortable, as advertised, while Sport sharpens responses to make the handling crisper with a slight degradation in ride quality. Track mode is sharper still, but without a track testing opportunity with this prototype we will have to postpone judgement on its effectiveness until later.

Interestingly, Hurley reports that because the Corvette was his team’s first experience with a mid-engine car with a rearward weight bias, often the familiar solutions to common problems no longer applied. When they might have softened the front shocks in response to an issue previously, now the answer might be to tighten the rear instead, he explained. Testing, trial and error and continuous refinement of the algorithms resulted in a car that exhibits well-executed responses to input from the road and the driver.

In a mid-engine car, obviously, the engine is now behind the passenger cabin rather than ahead of it, and this move has a noticeable effect on engine noise. Just as jetliners leave the thunder of jet exhaust in the plane’s wake, with little effect on passengers, so does the Corvette driver ride along ahead of the noise produced behind and exiting out the back.

The 6.2-liter LT2 overhead valve small block V8 engine is similar to the LT1 used in the front-engine 2019 car, with important differences to its oiling system. The LT2’s dry sump lets the engine sit an inch lower to the ground, lowering the car’s center of gravity. By necessity, the new dry sump pan is an inch shallower than before, and the oil tank now mounts to the front of the engine.

The tank is made from a heat-tolerant BASF Ultramid A3W2G6 composite resin in two-pieces that are hot-gas welded together and that contain an integrated oil centrifuge and separator system. The pan’s coolant passages improve oil cooling by 25 percent, while the redesigned oil tank contributes to a reduction in oil capacity by 2.25 liters.

With the engine so close to the ground, the 2020 ‘Vette’s exhaust exits through the top rather than beneath the engine. The headers are now tubular steel in place of the previous cast aluminum units. With the exhaust heat now at the top of the engine, Chevy moved the ignition coil packs from on top of the valve covers to the sides of the block. Now that the valve cover real estate is clear of ignition components, GM president Mark Reuss directed that the new car’s engine will wear badges on the valve covers identifying the LT2 as the work of the company’s Tonawanda engine plant, just as classic Corvettes from the 1960s did.

Chevy engineers tweaked the exhaust cam lobes, adding a millimeter of lift to match that of the intake cam and increasing duration by 12 degree, while the intake side adds a miniscule 4 degrees of duration. The team took advantage of the space above the engine to increase the size of the air intake plenum from 11.1 liters to 14.1 liters, providing space to make all of the intake runners an equal 210 mm in length.

The LT1 lived beneath the C7 ‘Vette’s low hood, which left no space for an ideal-sized airbox with equal-length runners, so the added space in the engine’s new home allowed for that improvement, which contributes to the boost in power to 495 horsepower and 470 lb.-ft. And in combination with a faster engine control unit and a Wide-Range Air-Fuel (WRAF) sensor, the LT2 idles noticeably smoother than the LT1 did, reinforcing the impression of refinement in the C8.

The LT2 bolts to a Tremec TR-9080 eight-speed dual-clutch transmission (DCT), where the C7’s front-mounted LT1 sent power through a torque tube to a rear-mounted transaxle. The old car provided the option of a traditional H-pattern 7-speed manual transmission with a clutch pedal or the 8L90 planetary automatic transmission with hydraulic torque converter.

On the track, the automatic transmission produced faster times, but the old manual transmission was more fun. Critics disliked the automatic’s sluggish response to clicks of the steering wheel-mounted shift paddles when drivers were in manual shift mode, but left to its own programming the transmission was faultless in the aggressive up- and downshifts needed for sporting driving.

Early track reviews of prototypes reported problematic shifting. We drove on the street, so it is possible that we wouldn’t have encountered any such issues anyway, but Hurley explained that the calibration teams are continuously updating the prototypes’ software, so it is also possible that any earlier calibration hiccups have been addressed since.

We were able to do some launch-controlled acceleration runs. The Corvette is impressive and the launch control sequence is simple enough to employ. Unlike the Ford Mustang Shelby GT500 we also tested recently, which also features a new Tremec DCT, the Corvette’s launch engine speed is fixed at 3,500 rpm. The Shelby lets the driver adjust the engine revs at launch to compensate for variable conditions.

The Corvette doesn’t need to do that, Hurley explained, because as a mid-engine car with its weight on the rear wheels, its traction is more consistent, so the car always launches well at 3,500 rpm. The official best result 2.9 seconds to 60 mph. We didn’t time any runs, but can say that the car put a smile on the driver’s face in less than 2.9 seconds every time.

The overall result of these dramatic technical improvements to the 2020 Corvette is that the car has been made genuinely relevant again in any discussion of top performance cars. This will only continue to be so with the future introduction of any new Z06 or ZR1 higher-performance versions. But with its amazing handling and acceleration, the 2020 Corvette Stingray more than stands on its own as an incredible performance car. We can’t wait for the track test to quantify this impression.