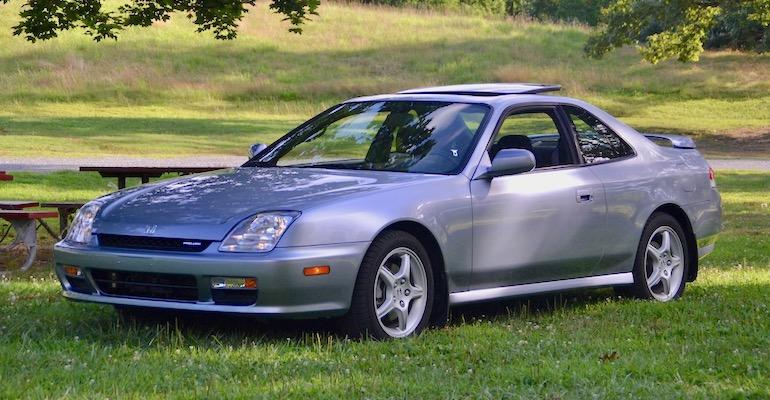 The 1999 Honda Prelude Type SH was a rolling showcase for Honda’s development of technologies like active torque transfer that have since become commonplace. Modern cars have computers controlling nearly every detail of their interaction with their driver and with their environment.

That wasn’t the case when our test car, a pristine 1999 Prelude with only 2,400 miles on it, was built in a world where anti-lock brakes and traction control were the leading edges of technology. But even in those dark ages, Honda was already developing technology that was the, ahem, prelude to today’s precision computer control.

This particular preserved-in-amber Prelude was one of the cars that Honda shipped around the country’s auto shows in 1999. Show goers gawked at this car in convention halls in various American cities that year. When the tour ended after the Denver auto show, the Prelude returned to Honda’s headquarters in Torrance, Calif., where it got shoved into a warehouse and forgotten for two decades. 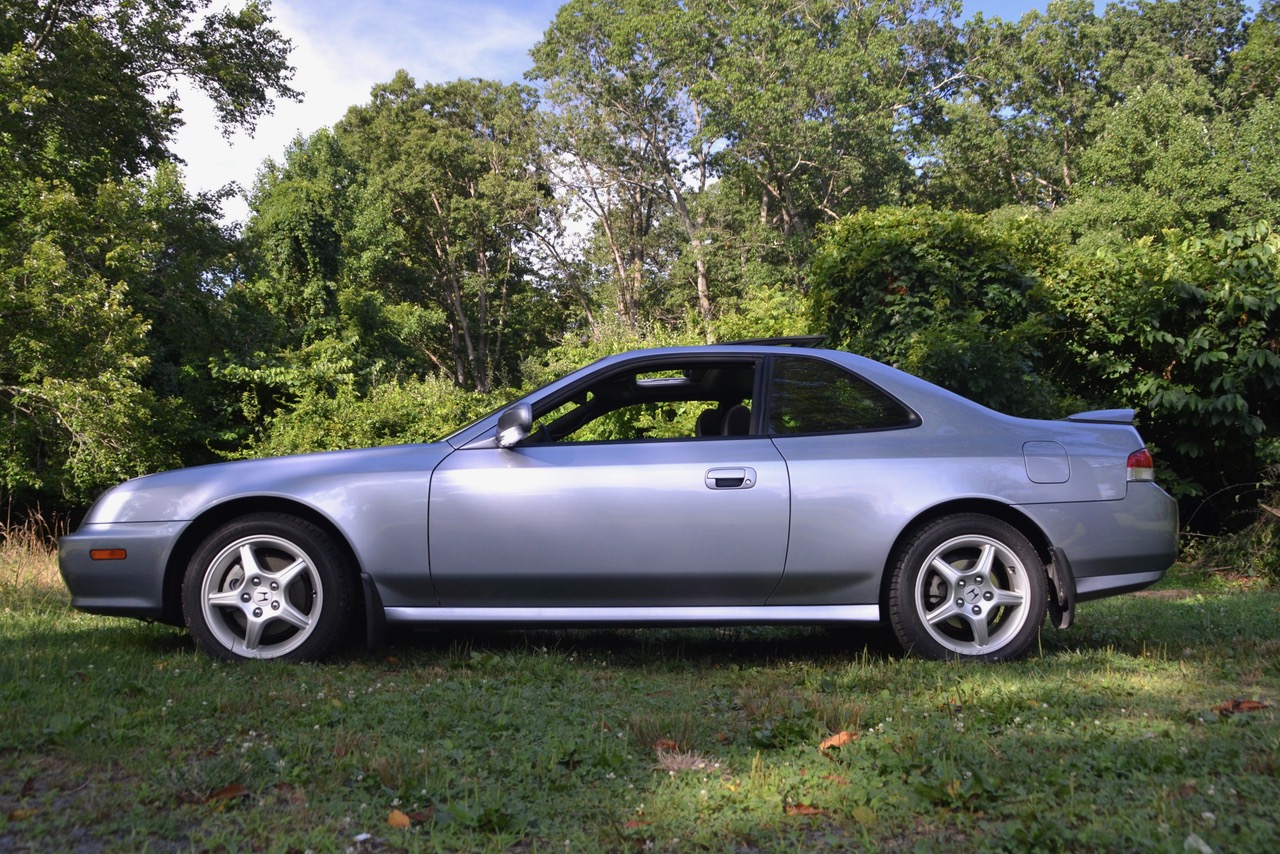 Eventually, Honda spokesman Davis Adams was tasked with sorting through the accumulated objects in the building to decide what to junk, donate or keep and he discovered the Prelude and a ’99 Civic Si, still wearing their Denver auto show 1999 windshield stickers.

Adams rescued the cars, which each had only 200-300 miles on their odometers at the time, and sent them to be refreshed with new rubber parts and batteries. The company has indulged some journalists during the lockdown by letting them drive the cars, and we had the opportunity to be reacquainted with the Prelude, which is a model we tested when new as well.

While the Prelude’s technology forecast the future where we now live, in other respects it served to illustrate how much has changed in the intervening decades. Parked in the driveway, an adjoining modern “compact” car hulked over the low-slung Honda. 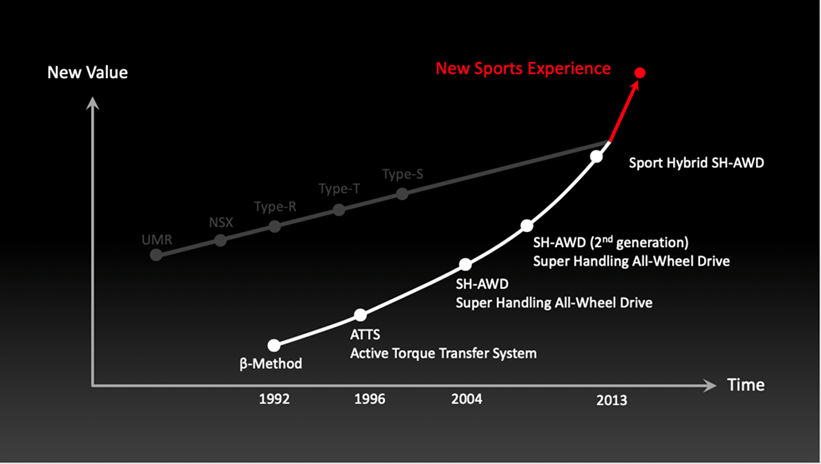 The Prelude’s low-slung roof, hood, and trunk and angular lines all stand in marked contrast to the bloated, convex SUV-influenced styling that characterizes today’s cars. Thin roof pillars provide fabulous visibility out of the Prelude from behind the wheel, but they don’t meet today’s roof crush requirements.

A pull on the driver’s door handle takes us back to the days of flush-mounted flip-up door handles that followed the grab-handle-and-thumb-button era and preceded our current pull-handle door openers. It seems flimsy compared to the other kinds, but it works fine.

The Prelude’s cushy velour fabric-wrapped seats show what we’ve lost as we’ve gone to mostly leather and vinyl fake leather upholstery in today’s cars. Our test car’s sunroof was tiny compared to the panoramic skylights we see now. But the roof opens just beyond the driver’s upward line of sight, so the impression from the front seats is that the top is more open to nature than it really is. 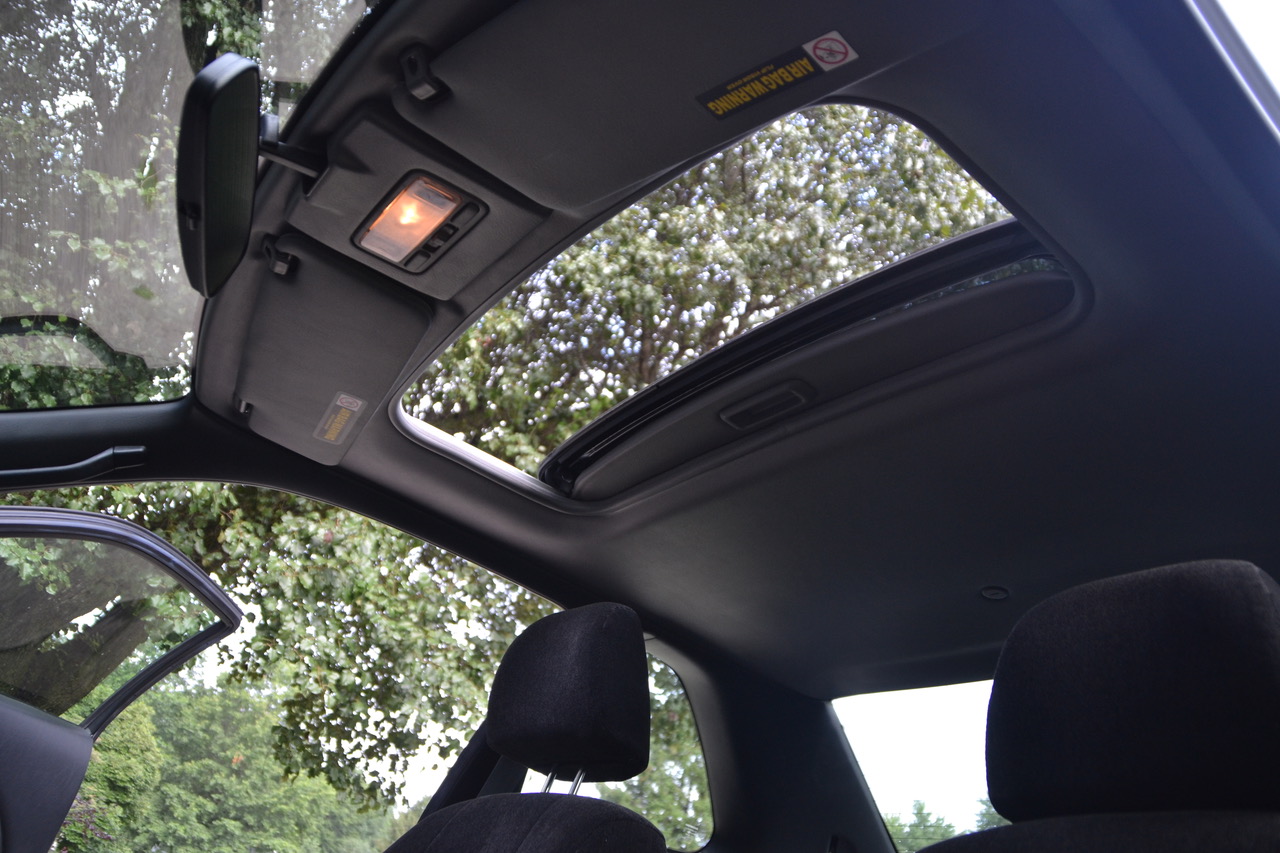 The sunroof seems like an afterthought in some respects. The switch to open and close the roof, rather than up near the sunroof, is down on the dashboard to the left side of the steering wheel, between the button for the cruise control and the dial for instrument panel illumination brightness.

Yes, that’s a single-disc CD player in the Honda Acoustic Feedback System stereo in the center of the dash. Digging through CDs to find one from 1999 to play on the Prelude’s stereo, we were surprised to realize that Dropkick Murphys “The Gang’s All Here,” dates from that long ago! 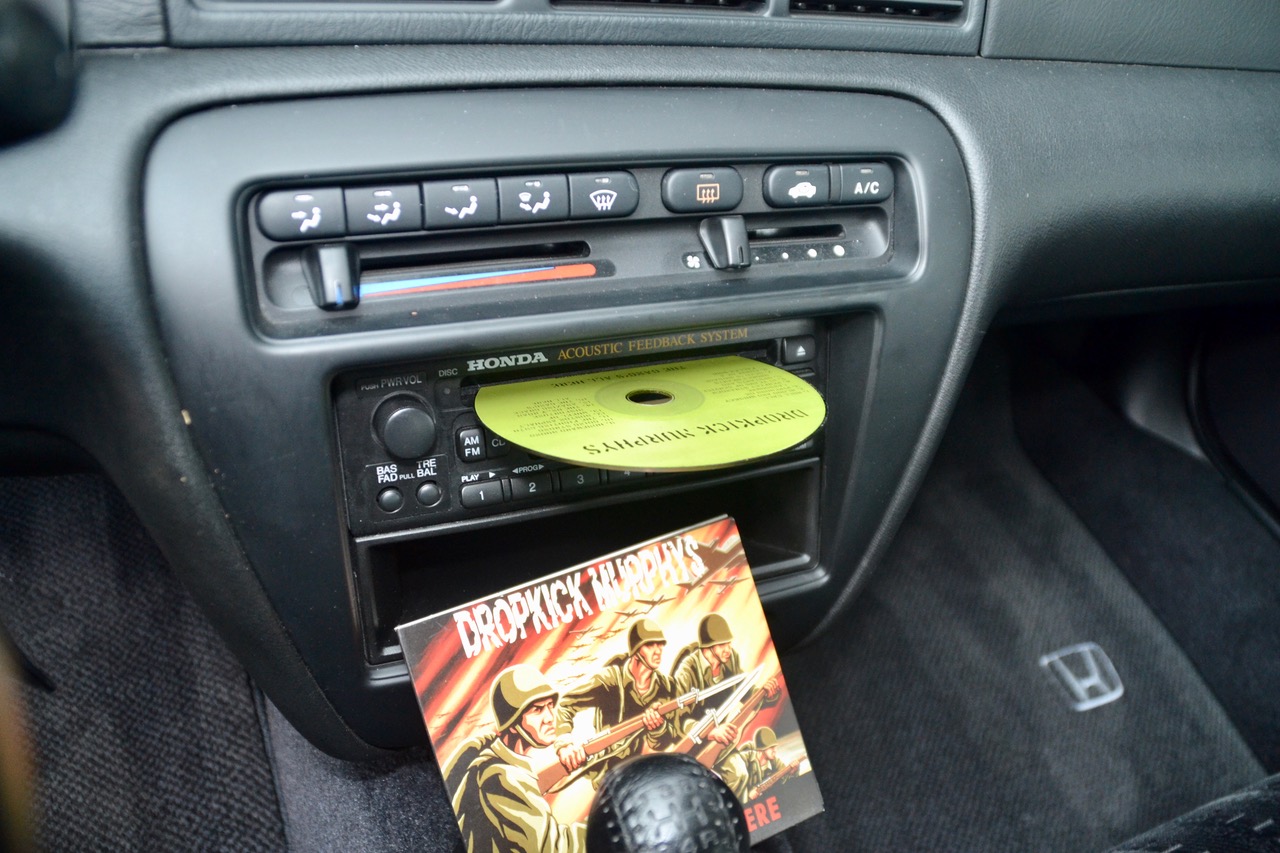 Sliding behind the steering wheel, the Prelude presents sensibly clear large analog instrumentation behind the thin-rimmed, leather-wrapped steering wheel. The shifter and light clutch pedal are instantly familiar to those of us who’ve been driving Hondas over the years. In the case of the Prelude, the shifter controls a five-speed transmission rather than a six-speed.

Shifter throws are longer than they are in newer cars, but it is easy to accurately guide the leather-wrapped shift knob to its intended destination.

A twist of the key (a physical key in the steering column-mounted ignition cylinder, and not a keyless pushbutton start) initiates that familiar Honda starter whine as the 200-horsepower, 2.15-liter inline four-cylinder fires up. 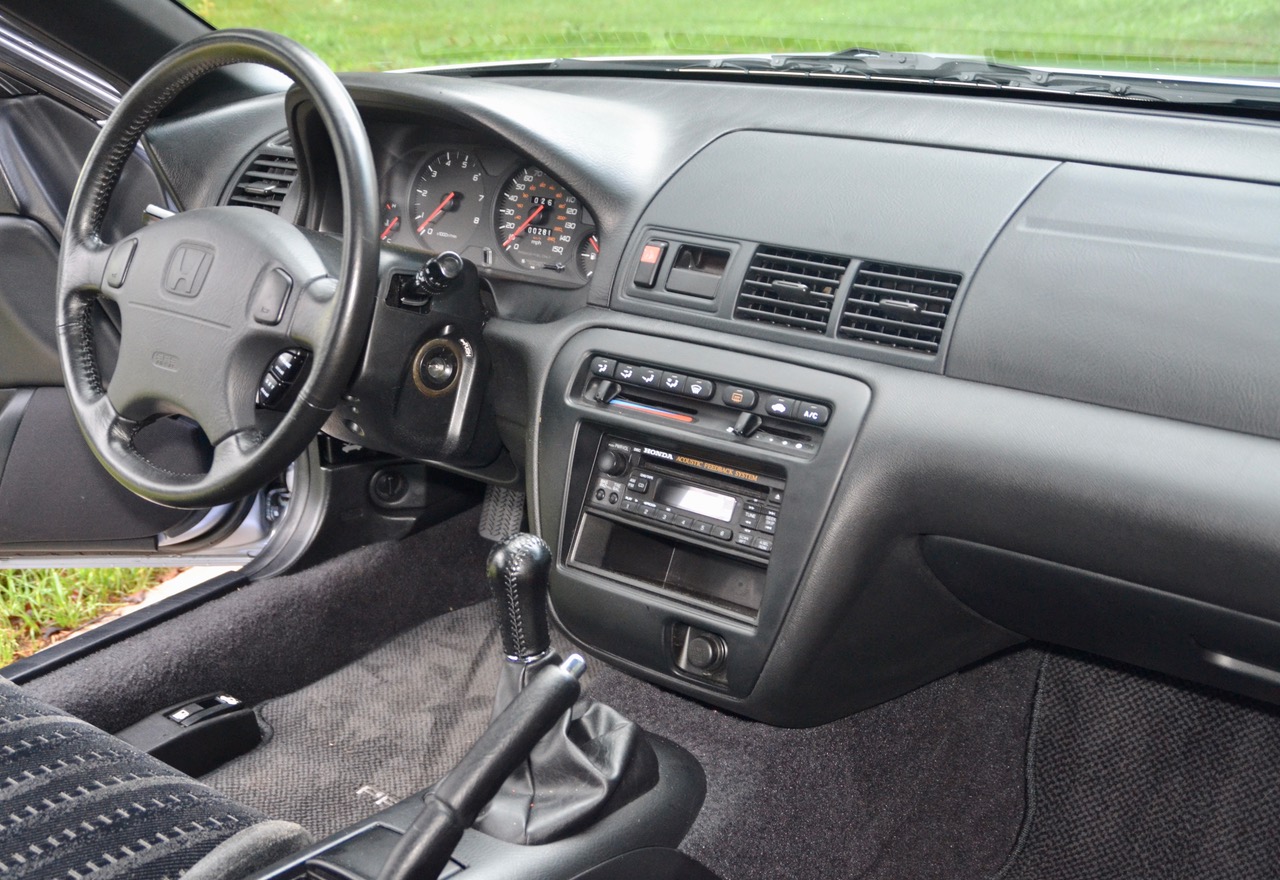 The engine rips to its 7,000-rpm redline, but the Variable Valve Timing & Lift Electronic Control (VTEC) system means that when accelerating with wide-open throttle in the first few gears, things start getting really interesting (and sonorous) at 5,200 rpm when the VTEC system switches from the docile low-rpm cam profile to the race-ready high-rpm camshaft and seemingly unleashes hell.

This experience is the source of the cult of VTEC fans, and the Prelude’s particular execution of this technology is especially exemplary. It provides a harder and more thrilling power jolt than, say, the 1999 Civic Si’s engine did. It is perhaps on par with that of the vaunted Acura Integra Type R, which now commands absurd prices as collectors drive up that car’s value.

While the Prelude’s VTEC engine is its heralded aspect, the ATTS system and the Prelude’s four-wheel double-wishbone suspension design provide the car’s real surprise: handling that seems impossibly balanced and precise for a front-drive car. 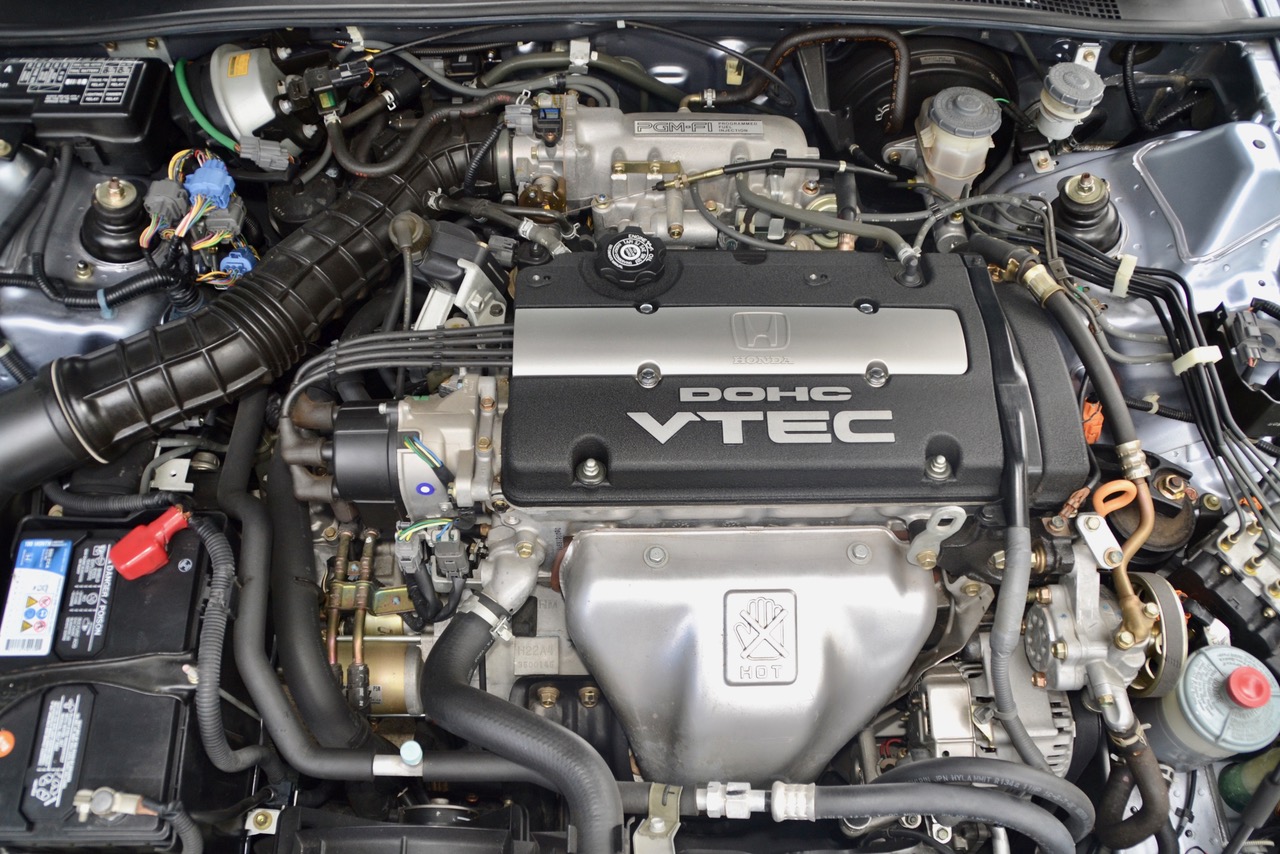 There is no understeer, which is typically inescapable in cars with most of their weight on the front end and with all of their power driving through the front tires which are also needed for turning the car. There is also no torque steer, so the engine doesn’t try to grab the steering wheel and drive when accelerating hard.

Even more impressively, there’s no torque reaction of any kind through the steering wheel. Sometimes, front-drive cars rather than trying to turn the car will instead resist the driver’s effort to change course. In the Prelude, it is impossible to decern that the same wheels are driving the car and steering it.

This is an incredible accomplishment that few cars achieve today. Honda did it more than 20 years ago. In regular driving, the steering effort skews slightly heavy, with the benefit of providing abundant feel and feedback about the road surface and the tires’ grip. 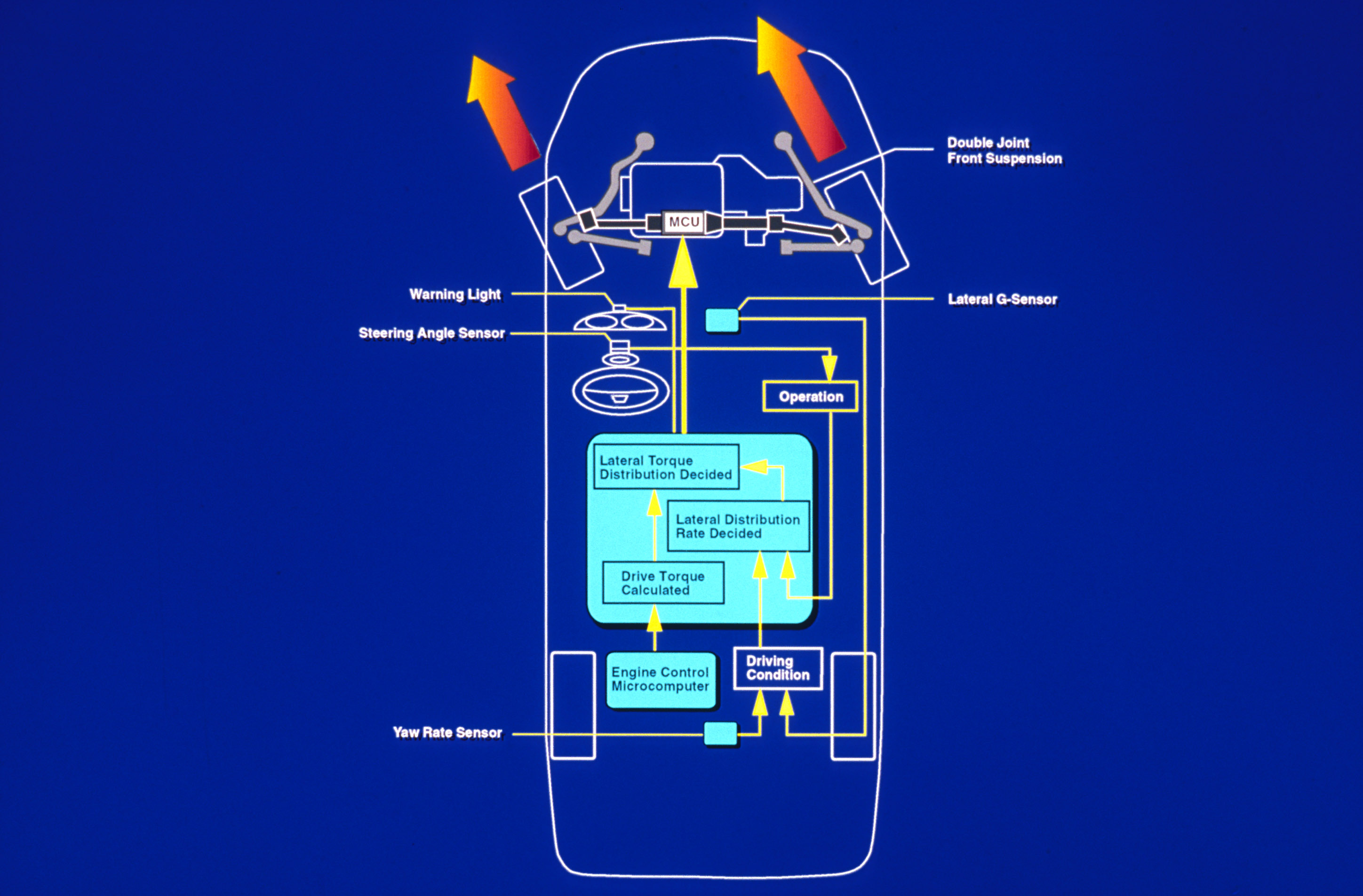 That grip is prodigious, which is not the expectation when looking at the 50-series all-season Michelin radials on the Prelude’s now-small-looking 16-inch aluminum wheels. It would be interesting to see what the car could do with some really grippy rubber because the grip, balance, and handling with some pretty mundane tires is inexplicably superb.

Of course, the engineers who designed the Prelude probably don’t consider these results inexplicable, no matter the tires. That’s why they selected double-wishbone suspension at all four corners in place of the MacPherson struts we’d see today. 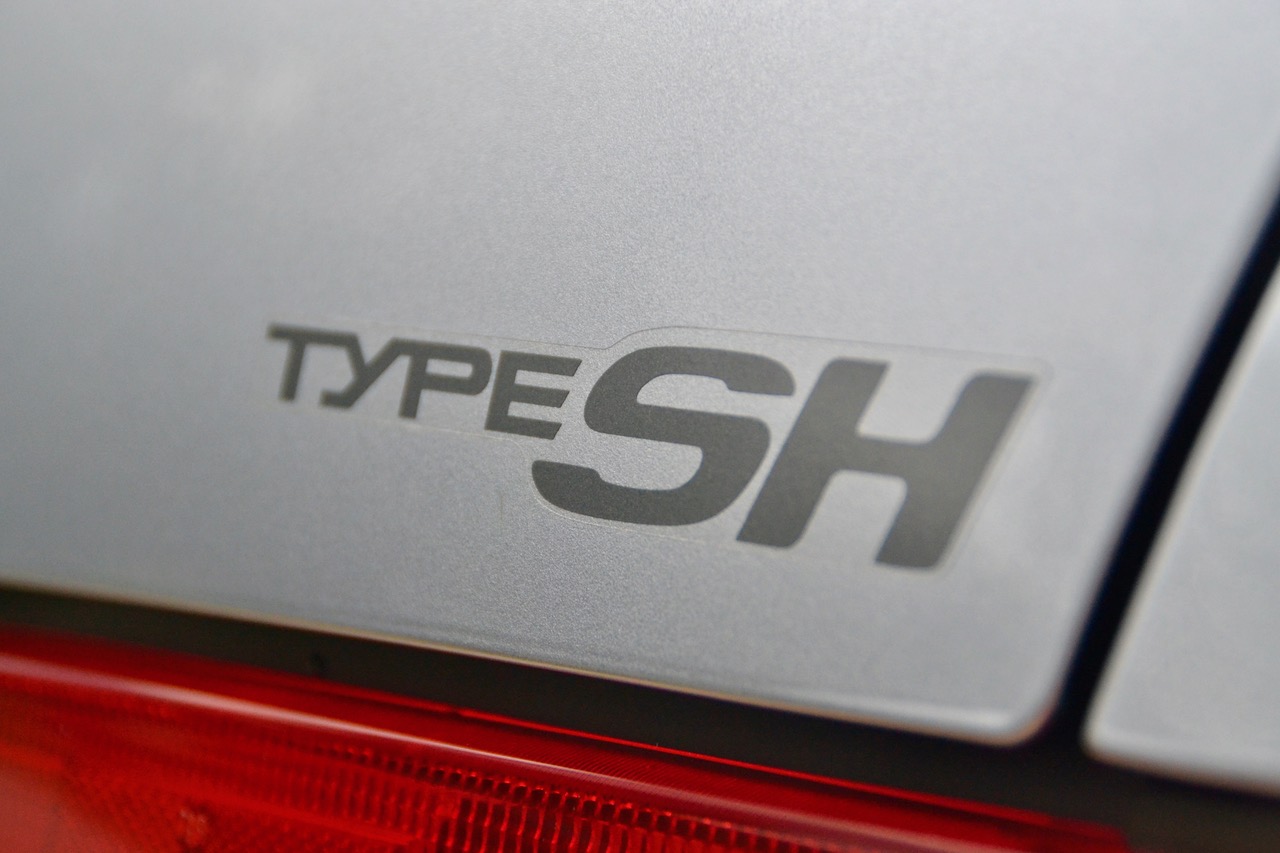 Honda explained the benefits of this suspension in the press release when the car was new:

By contrast, strut-type systems use the damper as a link. Inevitably, there is some "stiction" and binding in the damper when under load and, as a result, a greater degree of road vibration and harshness are transmitted to the body. On double wishbone suspension, Honda engineers can tailor the springs and damper assemblies for ride because the wishbone linkages provide the load path for suspension forces.

Double wishbone suspension also offers several handling advantages as well. Notable among them is its precise control of wheel geometry (hence its almost universal use on high-performance and racing cars).

Honda engineers have taken advantage of this trait and tailored the Prelude chassis' roll centers, track, wheel offset, caster, and camber in order to give it more linear handling characteristics and better feedback to the driver. The front and rear suspension geometry is designed to minimize front-end dive during braking and squat under acceleration.” 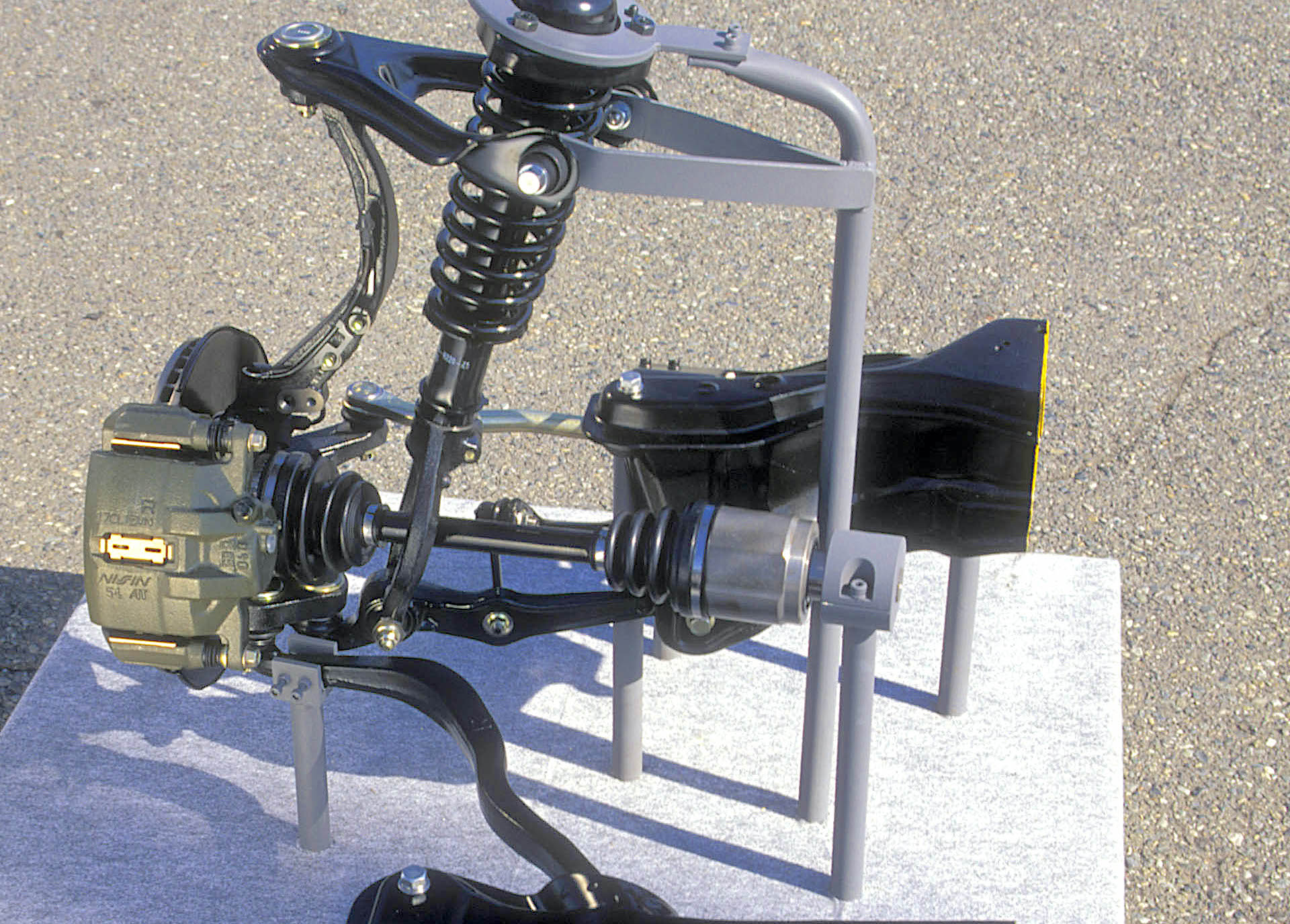 We’re sold, but unfortunately, the world’s car companies have almost universally decided that these advantages are lost on drivers who can barely divert their attention from their phones, so wishbones aren’t worth the added cost and complexity.

The Prelude also enjoyed increased body rigidity compared to the previous model. Our test car featured a 55 percent increase in bending rigidity and a 24 percent improvement in torsional rigidity over its predecessor. This leaves the suspension to do its job properly.

Which brings us to the contribution of the ATTS, which is only on the Type SH (Super Handling) Preludes, and not the base models. “The Active Torque Transfer System torque vectoring system offered in the Prelude SH did evolve both in philosophy and technology into the Super-Handling All-Wheel Drive offered on nearly all Acura models today,” acknowledged Honda spokesperson Andrew Quillan.

The system works by rotating the outside tire in a turn faster than the inner one, using information from driver inputs such as steering angle, as well as wheel speed data, gear selection, engine torque, yaw rate, and lateral acceleration. 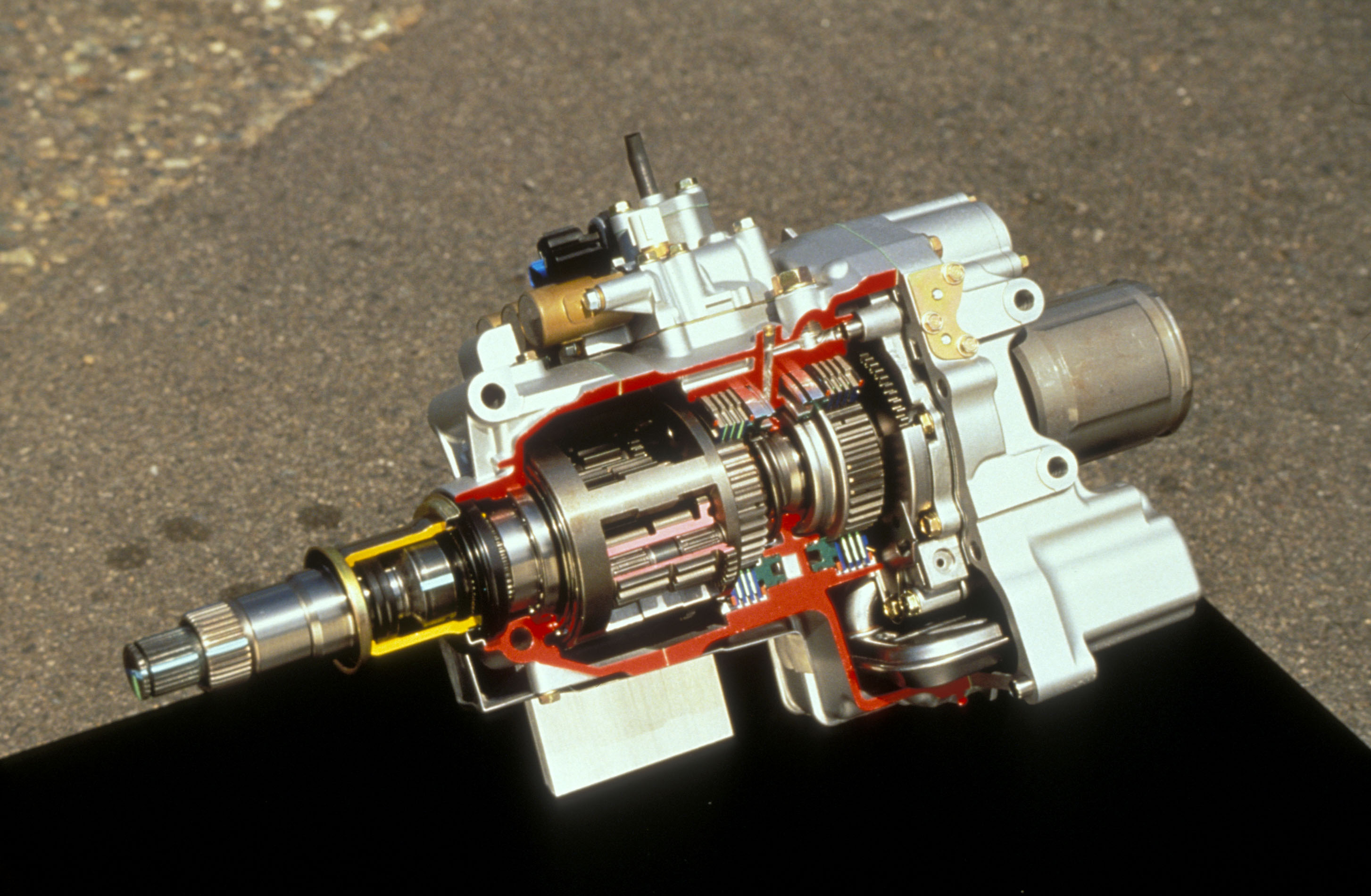 Honda reported that the system, in both front- and all-wheel-drive forms, generated 99 new patents for the company. Driving the Prelude with the ATTS system not only doesn’t feel like technology that is more than two decades old, it would still flatter most front-drive cars today. 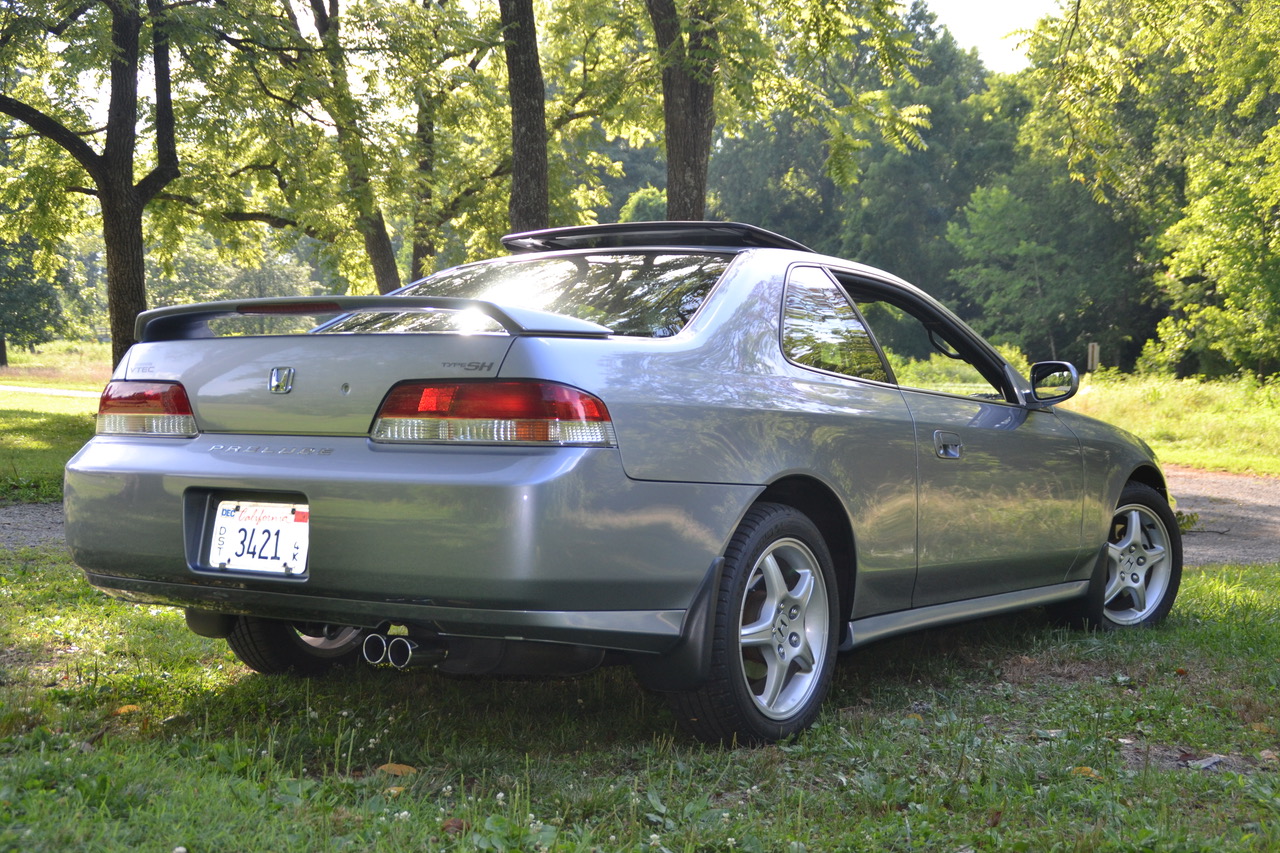 The new car includes technology that would have seemed amazing in 1999, including a Head-Up Display, satellite radio, remote start, and Low-Speed Brake Control to prevent fender-benders during parking maneuvers. But the old car has charisma and style the Accord can’t match, along with sophisticated suspension and peerless front-drive handling.