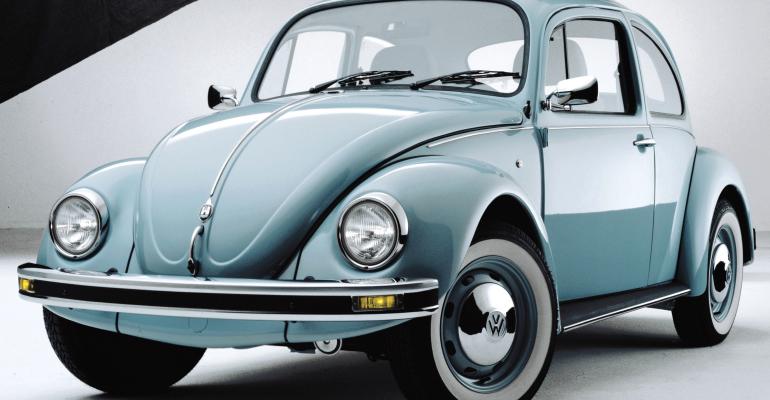 Start Slideshow ›
1938 through 1975 Volkswagen Beetles.
We Take A Look Back At The Memorable Run Of VW's People's Car.

In honor of the original People's Car, we've assembled a slideshow of the car's development over the decades from its inception in the 1930s to the conclusion of production in Mexico in 2003. VW has produced an animated film tribute to the Bug too, overlayed by the Beatles' Let it Be, performed by the Pro Musica Youth Chorus

“The Beetle is easily one of the most recognizable cars in the history of automobiles,” said Saad Chehab, senior vice president of Volkswagen brand marketing. “Honoring it properly required a medium with just as much versatility and universal appeal as the car itself."

The first members of VW's new ID family of EVs go into production in 2020, and response has been so favorable that the company has revised its forecast to reach 1 million ID vehicles by 2023, rather than the previously predicted 2025. “2020 will be a key year for the transformation of Volkswagen. With the market launch of the ID.3 and other attractive models in the ID. family, our electric offensive will also become visible on the roads”, said Thomas Ulbrich, member of the Volkswagen brand Board of Management responsible for E-Mobility. “Our new overall plan for 1.5 electric cars in 2025 shows that people want climate-friendly individual mobility – and we are making it affordable for millions of people.”

Still, they'll have a long way to go to reach the Beetle's 21 million cars over 70 years.