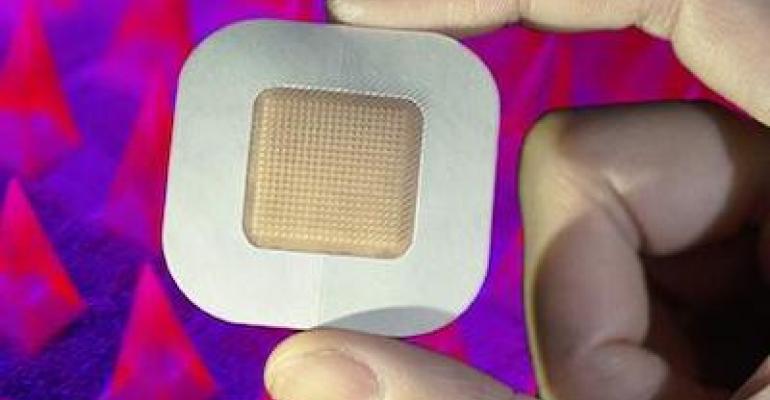 About the size of a quarter, the adhesive patch monitors blood-sugar levels and automatically delivers insulin, in the dosage required, via micro-needles made from a glucose-sensing polymer.

A smart insulin-delivery patch that monitors blood-sugar levels and automatically delivers the proper dosage of insulin could dramatically improve the quality of life for people with diabetes. Researchers at the University of California Los Angeles (UCLA), the University of North Carolina School of Medicine and Massachusetts Institute of Technology are developing the technology, which they describe in a recent issue of Nature Biomedical Engineering. Having successfully tested the technology on animals, the research team, led by Zhen Gu, PhD, professor of bioengineering at the UCLA Samueli School of Engineering, has applied for FDA approval of clinical trials in humans.

The adhesive patch is about the size of a quarter and is intended for once-a-day use. It is simple to manufacture by means of in situ photopolymerization, according to the researchers.

The device monitors blood-sugar, or glucose, levels via micro-needles made from a glucose-sensing polymer. Less than 1 mm long, the micro-needles are pre-loaded with insulin, which is released when blood-sugar levels reach a certain threshold. As the blood-sugar levels return to normal, insulin delivery slows down. In addition to bringing unprecedented convenience to patients, the device can help prevent insulin overdoses, which can lead to hypoglycemia, seizures, coma or even death, said the researchers.

"We developed this kind of glucose-responsive polymer based on the glucose-sensitive phenylboronic acid group," researcher Jicheng Yu explained to PlasticsToday. “Phenylboronic acid can reversibly interact with glucose to generate a negatively charged group, which causes the change in electrostatic charges in the microneedles.”

The article abstract goes into greater detail. “Under hyperglycaemic conditions, phenylboronic acid units within the polymeric matrix reversibly form glucose–boronate complexes that—owing to their increased negative charge—induce the swelling of the polymeric matrix and weaken the electrostatic interactions between the negatively charged insulin and polymers, promoting the rapid release of insulin,” write the researchers.

Much smaller than regular needles, the micro-needles penetrate about a half-millimeter below the skin, making the patch less painful than a pinprick. The depth of penetration is sufficient to deliver insulin into the body, added the researchers.

"Our main goal is to enhance health and improve the quality of life for people who have diabetes," said Gu, a former professor in the UNC/NCSU Joint Department of Biomedical Engineering. "This smart patch takes away the need to constantly check one's blood sugar and then inject insulin if and when it's needed. It mimics the regulatory function of the pancreas but in a way that's easy to use."

Although diabetes is recognized as a huge market opportunity by medical device companies—reportedly, more than 400 million people worldwide are diagnosed as diabetic—technological advances have been largely incremental. Medtronic’s MiniMed 780G automated insulin dosing system, which is expected to ship this year, and Tandem’s Control-IQ technology paired with its t:slim X2 insulin pump and Dexcom’s G6 continuous glucose monitoring system, cleared by FDA late last year, both move the needle somewhat in diabetes management. But, as stated in the press release describing the smart patch, treatment for the disease hasn't changed much in decades in most of the world.

“Patients with diabetes draw their blood using a device that measures glucose levels," said the press release. "They then self-administer a necessary dose of insulin. The insulin can be injected with a needle and syringe, a pen-like device, or delivered by an insulin pump. A smart insulin patch would sense the need for insulin and deliver it.”

"It has always been a dream to achieve insulin delivery in a smart and convenient manner," said study co-author John Buse, MD, PhD, director of the UNC Diabetes Center and the North Carolina Translational and Clinical Sciences (NC TraCS) Institute at the University of North Carolina at Chapel Hill School of Medicine. "This smart insulin patch, if proven safe and effective in human trials, would revolutionize the patient experience of diabetes care."

The technology has been accepted into FDA’s Emerging Technology Program, which provides assistance to companies during the regulatory process. The researchers are applying for FDA approval for human clinical trials, which they anticipate could start within a few years.