HomeElectronicsWill the Supply of Lithium Meet Battery Demands?
Recent
Electronics
The Music Is Over For Apple's iPod
May 16, 2022
Q&A With IndyCar Gearbox Expert Anna Chatten
May 13, 2022
Intel Unveils Trust Authority to Boost Security
May 13, 2022
Supplier News Looks at Highly Customizable Industrial Monitors
May 12, 2022
POLL
Here Technologies Maps are Key to Mercedes Level 3 Automation
May 12, 2022
'We Built the Domino's Pizza Tracker for Manufacturing'
May 12, 2022
Break Your Bubble Gum Habit by Watching Its Production
May 12, 2022
This Patch Monitors All Your Vitals, Including Blood Pressure
May 12, 2022 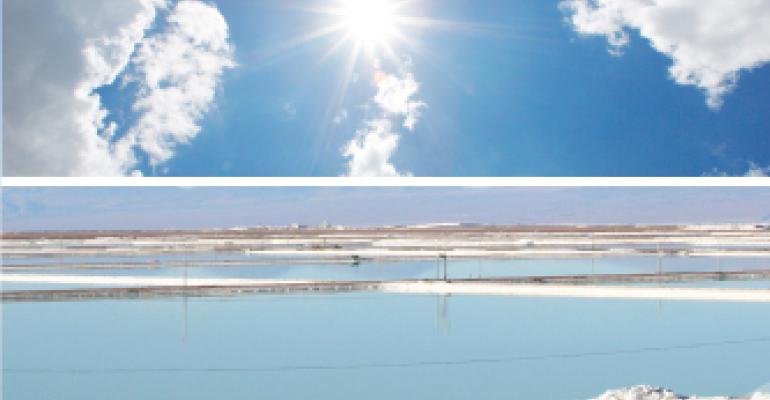 Critical shortage, surplus, or just right? The complexities of the lithium supply chain runs into uncertainties in electric vehicle acceptance.

According to the 2018 U.S. Geological Survey (USGS), Mineral Commodity Summaries for 2018, “Lithium supply security has become a top priority for technology companies in the United States and Asia.” The USGS went on to say, “Strategic alliances and joint ventures among technology companies and exploration companies continued to be established to ensure a reliable, diversified supply of lithium for battery suppliers and vehicle manufacturers.” Recently car companies like BMW, Volkswagen, Nissan, Toyota, Tesla, BYD, Dongfeng, and Great Wall have expressed concerns about their future sources of lithium during coming decades with battery-powered electric vehicles.

Globally, the end-use for lithium is 46% batteries, 27% ceramics and glass, 7% lubricating grease, 5% polymer production and several other industrial uses, each under 5%. It’s the use in batteries that has grown dramatically, both as a percentage and also in outright tonnage. The price for lithium has followed this growth, increasing 61% from 2016 to 2017.

The rapid growth in demand and price increase is making auto manufacturers nervous. In January of this year Toyota Tsusho (a Toyota Group trading company) announced that they would become a 15% shareholder in Orocobre Limited, a mining company with a lithium brine facility in Argentina. Chinese carmaker Great Wall late last year took a stake in Pilbara Minerals, an Australian lithium hard rock mining company. In February of 2018, Pilbara also made agreements to supply spodumene concentrate to POSCO, a South Korean manufacturer of lithium ion battery materials. BMW was also reported in the German press to be close to signing a ten year deal that would ensure its supply of lithium.

On March 13, 2018, Volkswagen AG, in a press release announced that 16 locations around the world would be producing electric vehicles by 2022. The company also announced that partnerships with battery manufacturers for Europe and China had resulted in contracts totaling more than 20 billion Euros (approximately $24.7 billion U.S. dollars). A decision about North American battery suppliers was expected later.

The push to lock in a supply of lithium is based on the forecast for dramatic growth in the uptake of electric vehicles (currently about 1% of the market in both the U.S. and China). At least one investment bank, Morgan Stanley, however, expects that EV growth won’t meet expectations, resulting in an oversupply of lithium and reduction in the metal’s price. As reported in a recent Design News story, the pace of growth of EV sales in the U.S. could depend on the direction the U.S. government takes on future fuel economy regulations.

The fear of an oversupply and a price crash for lithium was countered in the January Benchmark Mineral Intelligence research note that indicated that while lithium feedstock supplies are increasing, the effect of the demand from automakers has not yet become a significant part of the equation. The research note sated, “Therefore, while this auto speculation aids the upward trajectory of lithium’s price curve, it is not yet the defining factor. Real lithium supply and demand—producers selling to cathode manufacturers—is what is driving this price. The auto majors are yet to enter this “real” market.”

Although much of the focus has been on the auto industry, the use of lithium batteries for grid storage, such as Tesla’s Hornsdale Power Reserve in South Australia, as reported in Design News, also promises to increase demand to lithium into the future. Large scale projects have been announced at locations around the globe, and battery systems of 100 megawatt-hours or more require amounts of lithium equivalent to the amount needed for several thousand electric vehicles.

Long-term, the outlook for lithium is good. According to the USGS, annual consumption of lithium worldwide is about 41,500 tons, while total estimated reserves of the metal is 47 million tons. The USGS estimates that the current known reserves will last at least until 2100, not including the reclamation of lithium through the eventual recycling of lithium ion batteries. When that lithium finds its way into the transportation system will largely depend on how soon electrification and EVs are embraced by the car-buying public.

Where Does Lithium Come From?

Lithium is the 30th most common element, ahead of lead, tin, and silver. The Earth’s crust on land contains about 20 ppm (parts per million), the ocean’s crust about 4.3 ppm, and seawater has trace amounts. There are two principle ways that commercial lithium is produced: from minerals via hard-rock mining, and from brines that are pumped to the surface from beneath salt flats.

Lithium minerals are fairly rare, found mostly in finely grained granites known as lithium-cesium-tantalum (LCT) pegmatites. The most important commercial lithium minerals arte spodumene and petalite, both of which are lithium aluminum silicates. Pegmatites contain about 26 percent of the world’s lithium. The main producer of lithium from hard rock pegmatite mining are Australia, Brazil, China, Portugal, and Zimbabwe. The U.S. has large reserves of lithium in pegmatite that is not currently mined in the Kings Mountain district in North Carolina. Canada has significant reserves in Quebec and other provinces, which are currently under exploration in order to start lithium mining.

Lithium minerals are extracted using open pit mining and spodumene is the most common ore with lithium concentrations as high as 4.8% (Australia). Lumps of granite are crushed and then milled and sent to flotation cells, where minerals are separated. The spodumene is finally concentrated to a level of about 5% to 7% which is sent on to be further chemically processed to produce lithium carbonate. Most of this processing takes place in China.

The other way to commercially produce lithium is from brines. Brines contain about 58 percent of the world’s lithium sources and are located primarily in North and South America, and Asia. The deposits tend to be in arid area where a closed basin containing a salt lake or salt flat has formed. The regional climate must be dry enough so that surface waters (mostly snowfall melt) can flow in, but does not flow out. The inflowing water brings mineral such as dissolved calcium, magnesium, potassium, sodium and lithium from the surrounding area. The lake often dries out completely, leaving a salt flat covered by evaporated minerals, rock salt being the best known of these. As the water evaporates, lithium acts differently than the other dissolved minerals. Because it is more soluble, in remains in solution and becomes concentrated as it sinks into the underlying aquifer brine, which can be up to several hundred meters below the salt surface. The brine is pumped to the surface and placed in shallow evaporation ponds.

It can take 2-3 years of pumping the brine from one evaporation pond to another to the point where the lithium is enriched to as high as 5,000 ppm (about 0.5%). When it reaches this concentration it is pumped to a chemical plant where lithium carbonate and lithium hydroxide are produced. The first brine production of lithium was in the United States in California in 1938, but today the majority of lithium from brines comes from Argentina, Chile, China, and in the U.S. from a facility in Nevada.

With either method of extracting the raw material, conversion of feedstocks to battery-grade lithium carbonate has proven to be a bottleneck. The two leading processing companies, Ganfeng Lithium and Sichuan Tianqi are both increasing their production capability, in China and abroad. Benchmark Mineral Intelligence, in a January 2018 research note on lithium stated, “Spodumene conversion capacity in China will have the greatest bearing on lithium supply and price in 2018.”

If Trump Pulls Back on 54.5-MPG Mandate, EV Sales Could Stall