The Why and How of EV Charging 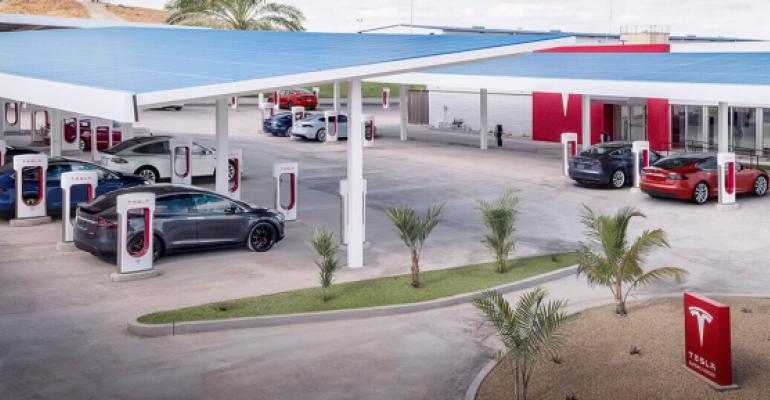 Making sense of a confusing array of charging options and opportunities

One thing people like most about owning an electric vehicle is never having to stop at a gas station. For most EV owners, plugging in overnight gives them the equivalent of a full tank of gas every morning. Unfortunately, because EVs are still a new and emerging technology, there is a bewildering array of charging systems and connectors that need to be navigated—either when charging at home or at one of the increasing number of public charging stations.

Charging a lithium ion battery is not as simple as charging the traditional lead acid starting battery that most gasoline cars have under their hoods. A lead acid battery charger is relatively simple and charges the battery with a constant current until an upper charge voltage is reached. At that point, the current tapers until it reaches a low level, when the battery is fully charged. A float or “trickle” charge can be used to keep a lead acid battery topped up almost indefinitely.

Lithium ion batteries are much more sensitive to charging conditions and cannot accept overcharging or trickle charging. They typically charge to 4.2 volts +/- 50 mV per cell. Prolonged charging at too high a voltage can cause the lithium ion cells to catch fire if safety devices don’t interrupt charging. On the other hand, charging to less than a full charge (say 80%) can prolong the life of a lithium ion battery.

When done properly, a lithium ion battery is charged at a constant current until its voltage reaches its maximum. Then, the current decreases, tapering until it reaches about 3% of the rated current for the battery cells. The current at which the lithium ion battery can be charged depends upon its construction. Charging at a higher current can reduce the time in which the voltage reaches its maximum, but not the time during which the current tapers. If charging to less than the maximum capacity, however, a higher current charging can be used to reduce the time the vehicle is connected to the charger. It is also worth noting that when the lithium ion battery is fully charged, it cannot be “trickle” charged like a lead acid battery.

Of course, for the average EV user, none of this is important and it is all incorporated into the components that make up a home or public charging system. The first important thing to know is that the charging of an EV, under most circumstances, takes place using an on-board charger installed in the vehicle. This charger connects to AC power from a plug on the wall and converts it into DC power that is used to charge the vehicle’s on-board battery pack.

There are two levels of charging for most home and public charging stations. Level 1 uses a standard 120-volt household power outlet (in the U.S.) and is the slowest type of charging. Because most household circuits are limited to 20 amps of current, the maximum power available through Level 1 charging is 1.9 kilowatts (kW) at 16 amps. Typically, using Level 1 charging, about 4 miles of range are added for every hour of charging. This is practical for overnight charging, but not for topping up (or so-called “opportunity charging”) when traveling any distances.

Level 2 chargers are available online and at home improvement stores. They cost between $500 and $1,000. Level 2 chargers require installation by a certified electrician (which can cost several hundred dollars or more), although home installation is possible by an experienced home builder. Dan, who lives in Raleigh, NC, went the DIY route: “It was easy to install; I just ran a box off the main outside panel and ran a wire across the house to the charger. Works like a charm,” he told Design News.

The standard connector for Level 2 charging is the SAE J1772 EV plug. Charging at home could be difficult if you don’t have a garage, but public Level 2 chargers are becoming common in cities and towns. More are being added nationwide nearly daily.

The fastest way to recharge an EV is using DC Fast Charging (DCFC), also called Level 3 charging. Instead of using an onboard charger that converts AC to DC, direct current comes directly from the charging station in DCFC. Typically, DCFC charges at 50 kW and can provide 75-100 miles of range during a 30 minute charge. Level 3 charging takes the typical EV out of the daily commuter category, making a trip of several hundred miles during a day a real possibility. Tesla has its own DCFC system, called “Supercharger.” It can charge at up to 120 kW, providing up to 170 miles during a 30 minute charge. Dumping huge amounts of energy into an EV battery can reduce its life, and many DCFC systems limit the fast charging to 80% of capacity. They may also reduce the charging rate on sequential charges during a single trip.

Unfortunately, the plug systems used for DCFC are not completely standardized. DCFC was first developed in Japan for the Nissan Leaf and Mitsubishi MiEV and uses the CHAdeMO (CHArge on the Move) standard and plug. In 2012, the SAE in the U.S. launched its Combo Charging System (CCS), which is based upon the J1772 Level 2 connector but adds two DC pins for DCFC. Meanwhile, the Tesla Supercharger system has its own plug and charging protocol. Tesla has made a CHAdeMO adapter available for its owners who wish to charge at CHAdeMO stations. It is the only such adapter available right now, however. Otherwise, the three DCFC systems are, as yet, incompatible. Attempts are underway to reconcile the differences.