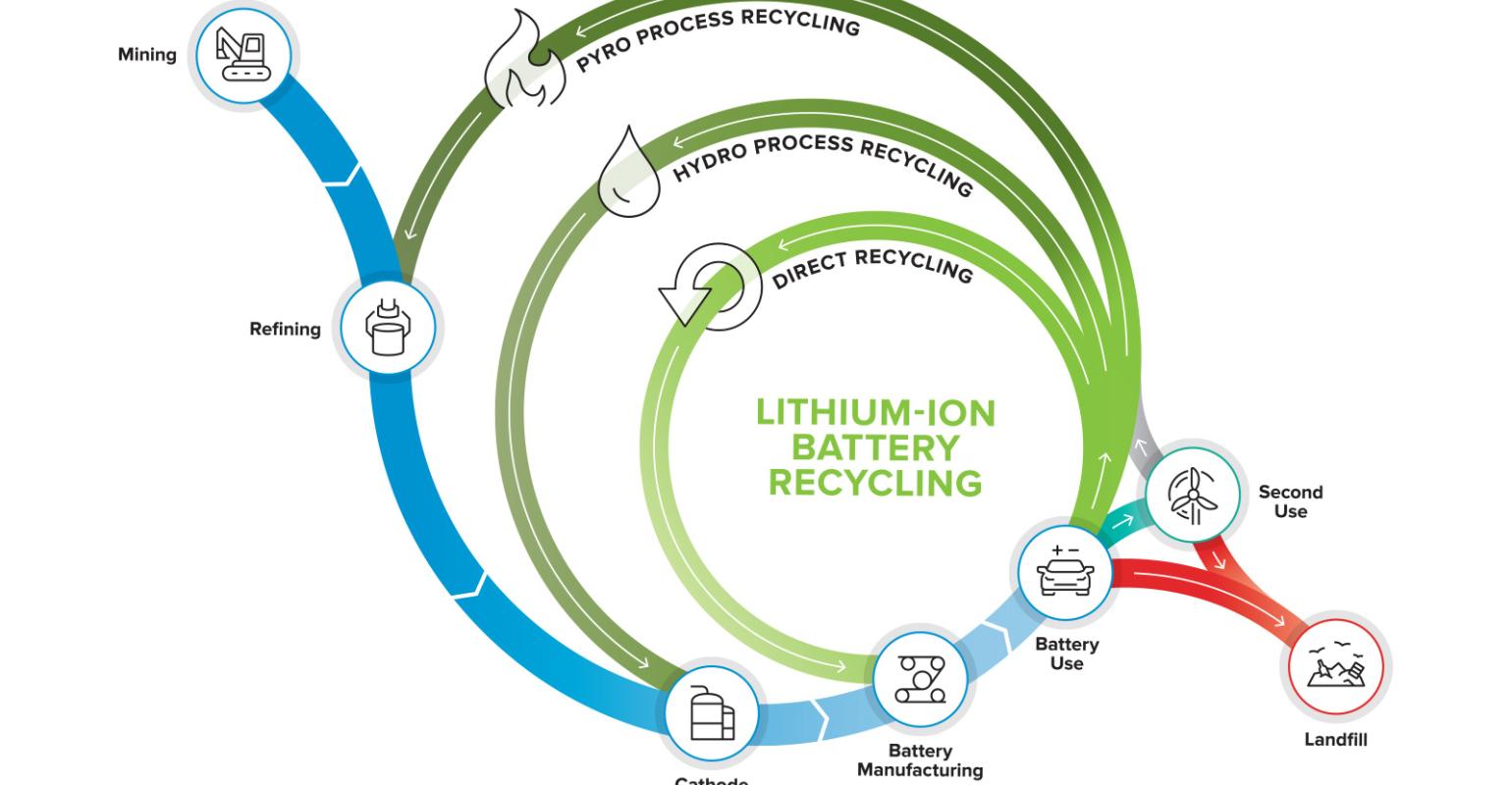 New programs from the Department of Energy and Volkswagen are promoting the recycling of lithium-ion batteries from electric vehicles.

The US Department of Energy (DOE) and automaker Volkswagen have announced separate programs, both aimed at making recyling lithium-ion batteries from electric vehicles (EVs) more cost effective, and even profitable.

One topic that is frequently raised in discussions about the growth of EVs is what to do with lithium-ion batteries that have reached the end of their useful life. Although naysayers envision landfills stacked with used battery packs, the reality is that the materials contained within a lithium-ion battery are valuable and worthy of recycling.

Until this point, EVs have captured less than 1% of the market—a number that is expected to grow dramatically in the coming decade. Because of the relatively small numbers of spent EV batteries that have been available, lithium-ion battery recycling on an industrial scale has been slow to be established. This is particularly notable in contrast to lead acid batteries—the 12-volt kind that are used to start ordinary gasoline-powered vehicles—which are recycled at a rate approaching 98%, according to the US Environmental Protection Agency (EPA).

That’s why the DOE has created its first advanced battery recycling research and development initiative—the ReCell Center. It is a collaboration between Argonne National Laboratory (ANL), the National Renewable Energy Laboratory (NREL), Oak Ridge National Laboratory (ORNL), and several universities including Worcester Polytechnic Institute, University of California at San Diego, and Michigan Technological University. In addition, collaborators from the battery supply chain, including battery manufacturers, automotive original equipment manufacturers (OEMs), recycling centers, battery lifecycle management services, and material suppliers, will be working with the center. Support from DOE will include $15 million over three years for the development of test beds and a facility to scale-up the process at Argonne.

“ReCell brings our national laboratories, the private sector and universities together to develop advanced technologies that safely and cost effectively recycle lithium-ion batteries,” said Daniel R Simmons, Assistant Secretary of DOE’s Office of Energy Efficiency and Renewable Energy (EERE) in an ANL news release. ​“This center will create jobs and create a national supply of lithium-based battery materials, as well as spur the adoption of an affordable electric vehicle economy.”

According to the news release, the center collaborators will focus on four key research areas to enable profitable lithium-ion battery recycling for industry adoption:

Taking the Pressure Off Minerals

Shortly after the ANL announcement, German automaker Volkswagen (VW) make a separate announcement that it is setting up a pilot plant for battery recycling at its Salzgitter factory, southwest of Braunschweig, Germany. “For 10 years now, we have been researching how we can recuperate raw materials. These include, above all, cobalt, lithium, manganese, and nickel” explained Thomas Tiedje, Head of Technical Planning in a VW news release. “We already have sustainable battery expertise in the Group and are developing this further.”

The VW news release notes, “In parallel, Volkswagen Group Components is also building a pilot plant for battery cell production at its plant in Salzgitter, together with the ‘Center of Excellence’ for batteries. In 2020, a pilot recycling plant will be set up in Salzgitter.” Batteries will be recycled at the pilot plant as early as 2020—initially 1,200 tons per year, corresponding to 3,000 vehicle batteries. Large quantities of battery returns are not expected until the end of the 2020s, when the first large proportion of EVs will have reached the end of their working life.

Such news is promising as recycling materials from lithium-ion batteries will help take the pressure off of sources for virgin materials such as lithium and cobalt. “This is an exciting time as applications for energy storage continue to expand,” said Argonne Director Paul Kearns. ​“Together, DOE and Argonne have made pivotal discoveries in advanced materials, chemistry, and engineering that have made batteries safer and longer-lasting. We are proud to pioneer the first scale-up and pilot test facilities to enable cost-effective battery recycling, helping to drive US prosperity and security.”