HomeElectronicsRide in an Autonomous Car at ESC Minneapolis
Recent
Electronics
Sponsored Content
Data as a Critical Raw Material
Researchers Study an Impenetrable Vintage Atari Game Algorithm
Nov 24, 2021
Black Friday and Cyber Monday – Fighting Chip Shortages and Cybersecurity
Nov 23, 2021
Design News Celebrates 75 Years
Nov 23, 2021
POLL
8 Great Car Gadgets to Update Your Ride
Nov 23, 2021
General Motors Charges to the Aid of Dealers Installing EV Charging Stations in their Communities
Nov 23, 2021
The Fundamentals of AR and VR – and how the Military Is Using Them
Nov 22, 2021
10 Best Family Cars for Going Over the River and Through the Woods
Nov 22, 2021

Ride in an Autonomous Car at ESC Minneapolis 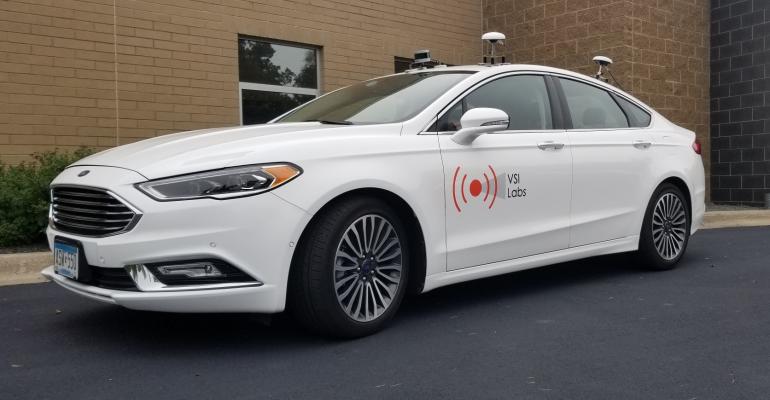 VSI Labs’ automated vehicle will allow attendees to see what its sensors see.

Attendees at the upcoming Embedded Systems Conference in Minneapolis will have a chance to experience autonomous driving as seen through the “eyes” of the car itself.

Autonomous vehicle research company VSI Labs will demonstrate a 2018 Ford Fusion hybrid outfitted with all the hardware and software needed to make the car drive itself. The vehicle will travel around a makeshift track inside the Minneapolis Convention Center. It will contain interior displays that allow riders to see the data from sensors as it’s processed.

“We want attendees to come away with a better understanding of how these vehicles work,” Phil Magney, founder and principal advisor of VSI Labs, told Design News. “They’ll have the opportunity to experience an automated vehicle by riding in it, seeing it, and talking with our engineers.”

The systems that make up the self-driving vehicles were integrated into the car by VSI Labs’ engineers. The key system, Magney said, is a by-wire control system from robotics manufacturer Dataspeed Inc. That system serves as the backbone for such functions as steer-by-wire, brake-by-wire, and throttle-by-wire. It enables engineers to eliminate the conventional mechanical linkages that tie the steering wheel, brake pedal, and accelerator pedal to their actuators.

“A lot of people don’t realize it, but that’s the basis of an automated vehicle,” Magney told us. “You have to be able to do everything by wire for autonomy to be possible.”

The car also employs inertial measurement units from Honeywell and Oxford Technical Solutions. “Both offer inertial measurements that are good for maintaining position when you’re in between your GPS (global positioning satellite) fixes,” Magney said.

Used together with real-time kinematic (RTK) correction services, VSI’s car has the ability to localize its position down to a few centimeters, Magney added. To accommodate indoor driving within the convention center (where GPS readings may not be available), VSI will also set up static sign posts, enabling the vehicle to maintain its desired trajectories.

The demo should be an eye-opener for many at the show—even those engineers who’ve spent half a lifetime in embedded systems design, Magney said. In essence, a self-driving car is emulating what the human adult brain does virtually every day. “Most people take driving for granted,” he told us. “They don’t realize what’s going on inside their brain while they’re driving. This demonstration will give them a new view of that.”