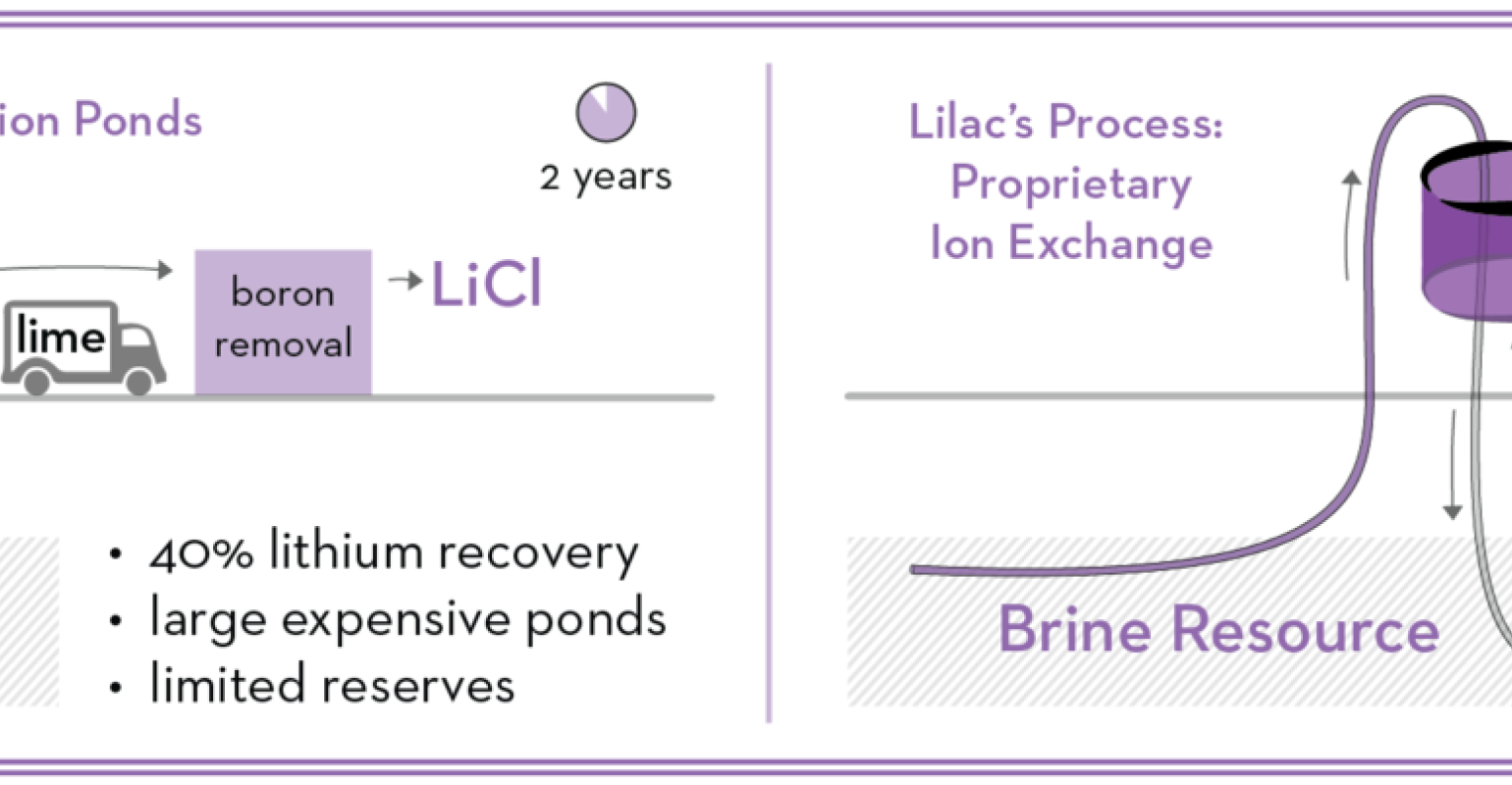 Cutting the extraction time from two years to one day is just one advantage of a new method of processing lithium-producing brines.

Lithium ion batteries power everything from cell phones and laptops to electric vehicles (EVs) and backup systems for power grids. The lithium used in these batteries comes from two sources: hard rock mining of the mineral spodumene in Canada, Australia, and China, or from solar evaporation of brines extracted from aquifers below salt flats or Salars. The brines contain about 58 percent of the world’s lithium sources and are located primarily in North and South America and Asia.

Now, a company called Lilac Solutions—a startup from Northwestern University—has devised a third way of producing lithium. The company, which was formed in 2016, has developed ion-exchange materials that can be used to extract lithium directly from brines. This process promises to save huge amounts of processing time and may prove to be more environmentally friendly.

Salt brine deposits tend to form in arid areas. They are created in a closed basin containing a salt lake or salt flat. The climate must be dry enough so that surface waters can flow into the basin, but do not flow out. The inflow brings dissolved calcium, magnesium, potassium, sodium, and lithium from the surrounding area into the basin. If the lake dries out completely, it can leave a salt flat covered by evaporated minerals—rock salt being the best known of these.

As the water evaporates, lithium acts differently than the other dissolved minerals. Because it is more soluble, lithium remains in solution. It becomes concentrated as it sinks into the underlying aquifer brine, which can be up to several hundred meters below the salt surface.

To extract lithium with the traditional method, the brine is pumped to the surface and placed in shallow evaporation ponds. It can take two to three years of pumping the brine from one evaporation pond to another to the point where the lithium is enriched to as high as 5,000 ppm (about 0.5%). When it reaches this concentration, it is pumped to a chemical plant, where lithium carbonate and lithium hydroxide are produced.

Processing the brine has three major problems. Only about 50% of the lithium available is extracted during the processing of the concentrate salt solution. Time is also a factor. Two to three years is a long time to wait and the pricing of lithium is quite volatile, making it difficult to predict future profits. Lastly, the variability of the weather can greatly influence the ability of the solar ponds to evaporate the brine solution. Such was recently the case with an Argentinian lithium producer that reported lower lithium production than expected because the local weather interfered with the evaporation of its brine ponds.

The lithium extraction method developed by Lilac Solutions was developed in an effort to solve these problems. The system pumps brine from the aquifer directly into a tank that contains the specialized ion exchange materials. As the brine passes through the material, lithium ions are released from the brine and filtered out by the ion-exchange material. The remaining salt solution can be drained directly back into the salt brine basin. There is no need for evaporation ponds and the process takes hours instead of years. In addition, approximately 80% of the available lithium can be removed from the brine using ion-exchange materials. The process only removes lithium from the brine and, unlike the evaporation process, does not produce the large piles of waste salt materials that result from conventional brine evaporation.

The process was the brain-child of Dave Snydacker, who was a Ph.D. student in Christopher Wolverton’s research group at Northwestern University. According to a news release by Northwestern University, Snydacker was studying lithium ion batteries when he became interested in the sources for lithium raw materials. After doing some research, he began to think of the problem in a new way. “In my research to answer these questions, I uncovered mostly good news about the future of lithium, but I also uncovered a big opportunity. New extraction technologies are needed to ramp up supply,” said Snydacker, who is now chief technical officer of Lilac Solutions.

Using an Open Quantum Materials Database that was previously developed by Professor Wolverton, Snydacker identified 13 potential new materials that could act as a lithium ion exchange medium. The company Lilac Solutions was founded by Snydacker to develop these potential materials and to find which candidates could, “…extract lithium faster, at a higher concentration, and with a much smaller carbon footprint.”

Lilac Solutions won $15,000 at the 2016 Northwestern University Venture Challenge and, in 2017, was awarded a Phase 1 Small Business Innovation Research (SBIR) grant from the Department of Energy (DoE). Two of the materials from the Open Quantum Materials database have already been tested to prove the concept, while plans are in place to test the remaining 11 materials to determine the best solution. Lilac’s hope is to build partnerships, providing its technology to brine developers and operators around the world.