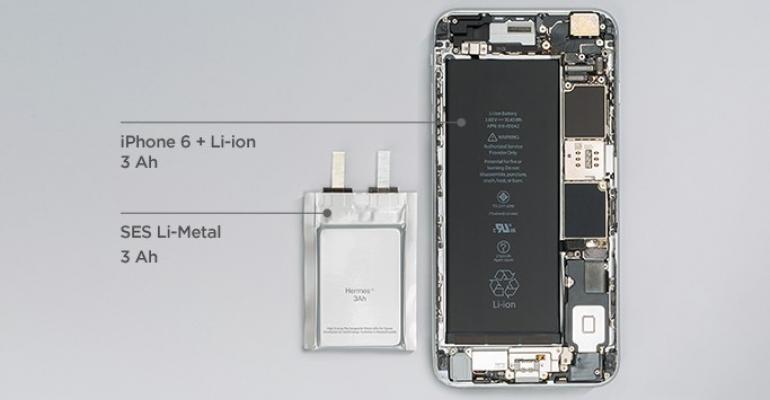 A Massachusetts company is developing lithium metal batteries that promise twice the energy density of current lithium ion battery designs. Significantly, the company has developed its new technology using existing battery manufacturing machinery and is already in limited production with its new design.

Are we on the cusp of a revolution in battery technology? Qichao Hu, founder and CEO of SolidEnergy Systems Corporation in Woburn, Mass., thinks so.

Hu points out that like the famous Moore’s Law that says that the power of microprocessors doubles every two years, the energy density of batteries doubles too, but on a much slower 30-year cycle. The last major breakthrough came in the early 1990s when Sony introduced the lithium ion battery. Its high energy density in a small package enabled a revolution in the development of the type of consumer electronics that we take for granted today.

“The lithium ion technology that was commercialized by Sony in 1990 enabled an era of laptops, iPods, cell phones, all that. It enabled an era of portable consumer electronics. But now we are entering into a new era—in terms of electric vehicles, drones, drone deliveries, air transportation, flying taxis. It’s a new era and we need a new type of battery to be able to power electric vehicles, whether they are on land or in air,” Hu told Design News.

Beginning in the 1990s, lithium ion batteries with graphite-based anodes provide an energy density of about 250 watt hours per kg (Wh/kg).  Recent breakthroughs in Silicon-based anodes have move that up to around 350 Wh/kg, but realistically that appears to be a limit for lithium ion technologies.  To go higher requires a change in technology. Now, right on that 30 year schedule, Dr. Hu and SolidEnergy says that the company is on track to have a lithium metal battery with nearly 500 Wh/kg available for production by 2021.

To be true, hardly a week goes by without the announcement of a new battery technology that promises to change the world. Although significant progress continues to be made, the optimism of most of the claims for dramatic performance improvements comes primarily from the small experimental scale at which battery research is undertaken. It is one thing to extrapolate results from experimental coin cells or computer simulations and quite another to build and test full-scale practical cells on production level equipment.

This, the company believes, is an advantage that SolidEnergy holds. Because of an early relationship with battery maker A123 at a time when it was reorganizing under bankruptcy, the fledgling SolidEnergy was able to use the A123’s idled production equipment to work out how it would build its next generation batteries. In addition, SolidEnergy, which was founded in 2012, made an early decision that they would concentrate on materials and not on process and have worked hard to develop new ideas that would work on existing battery production line equipment.

The key to SolidEnergy’s battery performance is the use of lithium metal foil as the anode (the negative electrode), rather than the graphite electrodes used in today’s lithium ion cells. Lithium metal batteries are commonly primary (non-rechargeable) small-scale batteries, known for high charge densities and long life. Coin or button batteries or AA or AAA size batteries are typically used to power watches or electronic devices and may last several years before needing replacement. Using foil to build larger rechargeable cells presents challenges.

“Lithium metal is very moisture sensitive, so you have to work in a dry room, it sticks to surfaces so you have to do special surface treatment on the equipment itself, and also it is very light, so when you pick it up you have to treat the interface carefully. So, the fundamental mechanisms are the same but the handling interface between the tooling and the materials has to be modified,” said Hu.

Another problem comes about when lithium metal foil anodes are used in rechargeable batteries. When a lithium battery is charged, lithium ions move from the cathode and the battery electrolyte to the anode. With a lithium metal anode, these ions plate onto the surface of the lithium metal, ideally in a uniform layer. In reality however, the plating of the metallic lithium often forms a spikey microstructure known as dendritic or mossy lithium. These dendrites, if sufficiently large, can pierce the separator between the cathode and anode, causing short circuits and even fires. This has limited practical lithium metal to non-rechargeable primary batteries only, despite their potential for significantly higher energy densities.

The solution to dendrite growth during charging, until now, has been to forsake the use of lithium metal anodes and to use a graphite anode in a lithium ion battery, which can reversibly intercalate (or incorporate) lithium ions into its structure, preventing dendrite growth. Dendrites can and do form on graphite electrodes when charging at low temperatures when the incorporation of the lithium ions into the graphite structure is more difficult, or at very high charging currents as might occur during regenerative braking of a road vehicle. Prevention of dendrite growth limits how quickly a lithium battery can be charged.

If you want to build a lithium metal anode, one trick is to coat the surface of the reactive lithium metal with a material that allows flow of lithium ions to the anode surface and that limits the creation of harmful dendritic structures that could short out the cell. This coating layer is the secret to SolidEnergy’s new battery design and as such is proprietary. Hu explained that the suppression on dendritic growth of Lithium during charging requires the special coating, a specific and proprietary charging protocol that controls voltage and current, and the application of pressure to the interior of the cell, which also helps reduce dendrite growth. Ideally, if all of the requirements are met, a smooth and coherent layer of lithium metal is plated onto the existing metal foil during each of the thousands of recharge cycles.

SolidEnergy is obviously not the only battery company working on rechargeable lithium metal technology, however, it is the only one that is currently in commercial, albeit limited, production. The company’s rollout of its lithium metal batteries is taking place in stages. The first product, introduced in 2017, has been a battery for use in high-altitude drones, such as those operated by the military. The lithium metal anode employed by the SolidEnergy drone batteries allows them to produce the same energy as lithium ion batteries, but in half the space with almost half the weight. The weight reduction allows the drone performance and endurance to improve significantly.

Because SolidEnergy is a business-to-business supplier, these special drone cells are not available to the general public. They are currently produced on SolidEnergy’s prototype production facility in Woburn, at a rate of about 5,000 cells per month. The company is looking for a Chinese or Korean partner to increase the production capacity.

Because the batteries were designed to be produced on existing battery machinery, scaling up production should not be an issue, according to Hu. Limited production and handling the thin lithium metal foil means that the battery produced in Massachusetts is more expensive than a lithium ion battery, but Hu expects costs to drop as production volumes increase when sales of batteries for consumer-level drones begins.

The next phase will be consumer electronics—cell phones and watches. “Ultimately, we want to enter the electric vehicle market,” said Hu. “Now these electric vehicle could be cars with wheels on land, as well as electric VTOLs. So vertical takeoff and landing flying taxis.  That will be 2021 and beyond,” he said.