HomeElectronicsBattery/Energy StorageLamborghini and MIT double the energy density in super capacitors
Recent
Electronics
Argo AI Expands to Austin and Miami in Search of More Challenges
May 18, 2022
12 Ideas that Could Change the World
May 18, 2022
Making the AC Power Main Intelligent
May 18, 2022
How to Make Sure Your Digital Transformation Doesn’t Fail
May 18, 2022
POLL
The Internet's Grooviest Slideshow of Legendary International Scouts
May 17, 2022
Electronics Industry Bolsters Root of Trust Security Efforts
May 17, 2022
3 Tips for Embedded Software Configuration Management
May 17, 2022
Novel 3D Printing Method Used to Replenish Coral Reefs
May 16, 2022

Lamborghini and MIT double the energy density in super capacitors 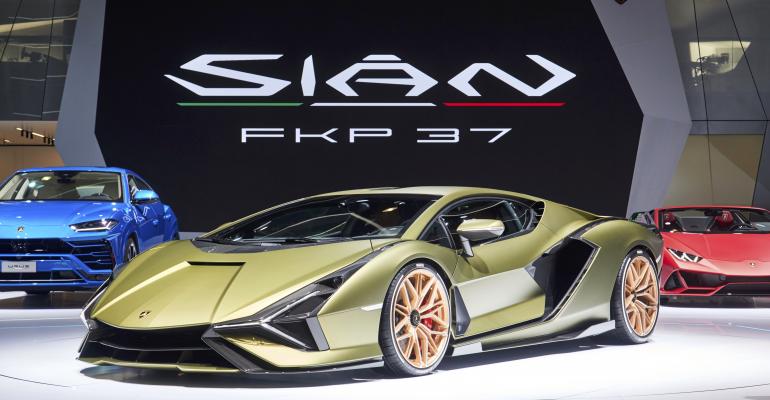 Lamborghini's exotic supercars will rely on capacitors for a jolt of electric boost, rather than moving to turbochargers.

An advance in super capacitor technology by partners Automobili Lamborghini and the Massachusetts Institute of Technology promises to make this method of energy storage and release even more suitable for fast Italian hybrid-electric super sports cars. The patented technique doubles the energy density of the capacitor compared to the current state of the art, according to Lamborghini.

The new patented material was synthesized by professor Mircea Dincă’s team in the laboratories of MIT’s Chemistry Department with the support of Lamborghini’s Concept Development Department, and it is based on the “Metal-Organic Frameworks” (MOF) concept. The molecular structure of this family of materials makes it the ideal candidate for producing electrodes for high performance supercapacitors of the future, because it maximizes the amount of surface area exposed to electric charge in relation to the mass and volume of the sample.

While the patented material is still in the lab and not in the factory, the company does not see any obvious issues preventing manufacturing production-ready capacitors that use it. “The investigation about production of the technology is at the very beginning, but at the moment we don’t see many obstacles,” Maurizio Reggiani, chief technical officer, told Design News.

Of course, after manufacturability, the next question with new technology is the cost, though a maker of high-end sports cars is less sensitive to cost than others. “Costs have not been evaluated yet,” Reggiani reported.

Lamborghini has been outspoken in its intention to preserve the auditory characteristics of its signature naturally aspirated V10 and V12 engines despite the industrywide move to forced induction. Instead, the Italian supercar maker will rely on electric boosting to keep its machines competitive with turbocharged rivals’ performance while preserving the shriek its customers love.

But rather than follow the conventional hybrid-electric route, using lithium-ion batteries, Lamborghini is pursuing capacitors for energy storage. “There’re several very interesting characteristics,” Reggiani explained. “The power density, first of all, which makes the capacitors much more powerful compared with batteries -- up to three times more power for a given mass -- with a symmetrical behavior which makes them able to recuperate as much power as they can deliver.  Under this aspect, the difference with batteries is huge.”

And that’s not the only benefit. “Then, the very low electrical resistance, which means high efficiency and low heat dissipation, and the very long life, measurable in millions of cycles in comparison with the thousands of cycles of the batteries,” Reggiani added.

Lamborghini began its push toward super capacitor hybrids in 2017, with the Terzo Millennio, and most recently with the Sián, which debuted at the Geneva Motor Show earlier this year. As for when additional such models will arrive and when they will employ this advance in technology, Lamborghini can not say just yet. “It’s too early for both questions. But the evolution of the project up to now has been quicker than expected, so we’re optimistic for the next steps as well.”

Which should be naturally aspirated music to the ears of fans of the traditional operatic V10 and V12 arias by Lamborghini’s supercars.