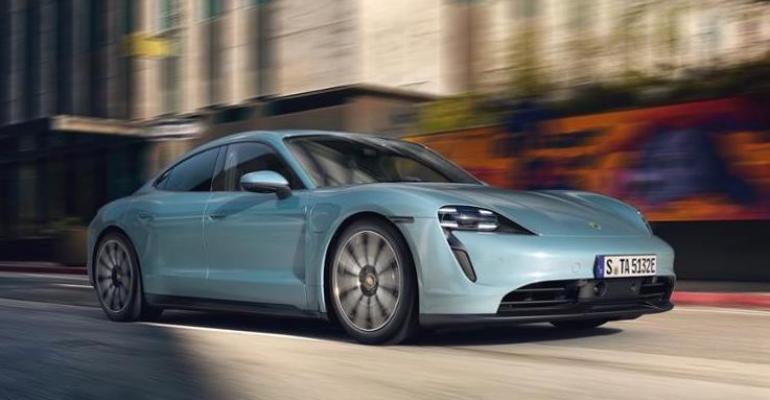 When Porsche cannonballed into to the EV pool with the announcement of the Taycan in September, the company followed a rational strategy of launching with the top-of-the-line Turbo and Turbo S models, figuring that early adopters would be happy to pay the price tags of those two cars.

A month or so later, Porsche has closed the circle by introducing the base model, the Taycan 4S. The 4S still has a six-figure price tag, but it is much less expensive than either of the Turbos, positioning it closer to the incumbent market leader, Tesla's Model S.

The Taycan 4S retains the same arrangement as the Turbo models, with a 300-amp pulse-controller inverter sending power to the motor driving the front wheels through a direct-drive axle and a 600-amp inverter for the motor spinning the rears through a two-speed transaxle.

Driving range is a crucial benchmark for EVs, and the Taycan 4S has a range of 253 miles, compared to 288 with the Performance Battery Plus pack. That's on the European test cycle; the EPA has not yet rated the driving range of the Taycan.

Either way, 0-60 mph acceleration takes 3.8 seconds. The top speed is electronically limited to 155 mph. While the larger battery pack provides more power, it is important to remember that it is heavier too, at 1,389 lbs., comparted to 1,221 lbs. for the standard pack.

While the Turbo S rolls on fashionable 21-inch wheels and the Turbo has 20s, the Taycan 4S employs 19-inch wheels, which could appeal to drivers who appreciate the cushier ride provided by taller sidewalls in place of unyielding aluminum. The smaller wheels also weigh less and have less rotational mass, which is advantageous.

As an EV, of course the Taycan also employs regenerative braking, with the ability to generate 0.39 g of deceleration without even using the friction brakes.

The wheels on the 4S are also narrower, at 8 in.in the front and 10 in. in the rear, making them an inch narrower respectively than the Turbo's wheels and 1.5 in. narrower than those on the Turbo S. This should help reduce aerodynamic drag, but Porsche says the 4S scores the very same 0.22 coefficient of drag as the other models, so it may be that the slightly different bodywork on the 4S keeps things equal among the variants.

While most drivers will surely have to use conventional 240-volt AC charging that is commonly available, the Taycan can also use 800-volt DC charging stations that are part of the Volkswagen Group's Electrify America network. Cars equipped with the standard battery can fast-charge at 225 kW, while the Performance Battery Plus can charge at 270 kW.

More common 400-volt DC chargers work at 50 kW, though Porsche offers a Booster that raises that to 150 kW for faster charging at 400-volt stations.