The McLaren Elva Eschews the Unnecessary in Pursuit of Lightness 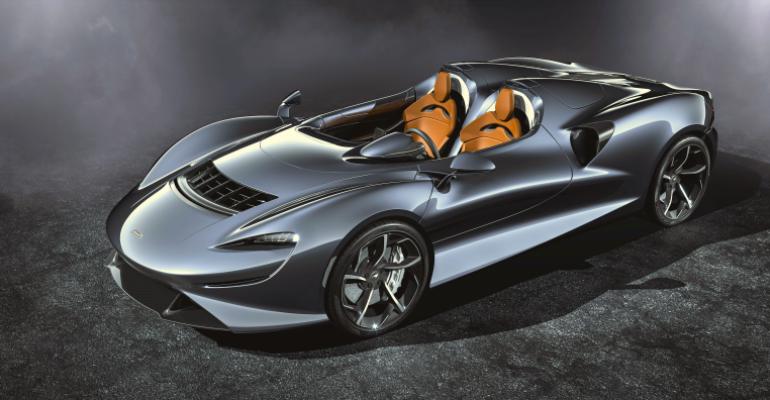 This tribute to the classic Elva sports car does without a windshield, in true race car form.

Looking at elemental classic cars can bring twinges of regret that today’s much safer machines have become massive, and massively heavy, armored tanks by comparison. McLaren Automotive must have been feeling nostalgic, as the company has looked back to 1964 to create the open-top Elva, a lightweight supercar that strips away as many modern amenities as possible to create a performance-focused driver’s car.

In tribute, McLaren will build 399 of the $1.7 million new versions of the Elva. Like a proper minimalist race car, the Elva doesn’t even have a windshield, but one will be available in those states that require one. The elimination of the roof, windshield, wipers and other assorted ephemera not necessary for high-speed sporting drives are obvious contributors to the Elva’s claim as McLaren’s lightest model. Less obvious contributors include titanium pistons inside the brake calipers and a titanium/Inconel exhaust system that features 3D-printed titanium tips.

The modern Elva features a version of the engine used in the McLaren Senna. In this case, the 4.0-liter twin-turbo V8 is rated at 804 horsepower, 590 lb.-ft. and drives the rear wheels through a seven-speed dual-clutch paddle-shifted transmission. These factors combine to accelerate the Elva to 60 mph in less than 3.0 seconds and to 124 mph (200 kph) in just 6.7 seconds, which is quicker than the Senna.

With no roof structure to support, McLaren says the Elva has its own unique carbon fiber chassis, rather than sharing the one of the two chassis designs, the MonoCell II or Monocage chassis designs, which would likely be heavier than necessary for the minimalist Elva.

As with its brand siblings, the Elva features electro-hydraulic power steering assist for the superior feel it provides over electric power steering systems and it uses McLaren’s linked-hydraulic active suspension system to provide seemingly contradictory cushy ride and sharp handling.

McLaren understands that you might not be interested in suffering in the heat or the cold while motoring al fresco, so they’ve incorporated an Active Air Management System which the company claims shelters occupants by manipulating air flow. It ducts air from the nose of the car to outlet vents ahead of the cabin to direct airflow over the cockpit, preserving a bubble of still air inside at speed.

One visible difference between the original Elva and this new one is the old car’s fixed roll bar that provides crash protection in the event of a roll over. McLaren’s new car has a pop-up roll bar hidden beneath its rear deck that deploys if the car starts to tip over, providing roll-over protection.

“The McLaren Elva is a true Ultimate roadster; it exists purely for the pleasure of driving, to deliver an enthralling and immersive experience born from the ultimate connection between the car, the driver and the elements,” pledged Andy Palmer, McLaren Automotive Vehicle Line Director for its Ultimate Series of cars.

We should all hope to be lucky enough to find out firsthand one day.