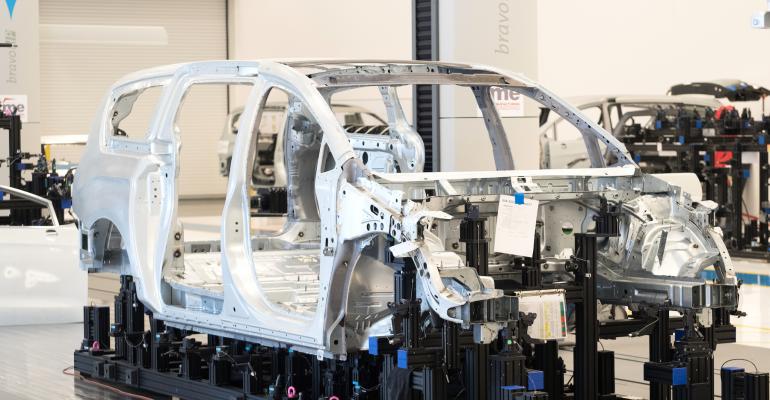 1990s modeling techniques may be the solution to more efficient designs today.

Improved high-strength steels and mind-bogglingly complex computer models of the vehicle body structures built with those new kinds of steel sound like a recipe for better new cars, but in fact they have the potential of making cars needlessly heavy, with a harsh ride or sloppy handling.

The solution is to run an extremely simple model, very early in the vehicle design process, said Fiat Chrysler Automobiles technical fellow for advanced body structure James Truskin, in a presentation at the Altair Technology Conference in Detroit, where he described the company’s new Simplified Loadpath Model.

While today’s powerful computers can quickly crunch through a simulation of a vehicle structure with 5 million degrees of freedom, computers in the early 1990s worked with BEAM-SPRING models with just 480 degrees of freedom to calculate load paths and joints in vehicle structures. “We’ve lost some learnings and understandings of what made a body structure great,” Truskin asserted.

It is a simple model like the ones from the ‘90s, applied at the very beginning of the process of designing a structure for a planned new vehicle platform, that can steer engineers toward an optimized design that simultaneously reduces weight and improves noise, vibration and harshness characteristics, said Truskin.

“We wanted a new model to understand how to design vehicles with these new materials to get optimized NVH performance,” he said. “It is not possible to do this with regular body structure models later in the design process,” he said.

New high-strength steels can let engineers whittle away materials in the structure’s joints, reduce the gauge of the material used and adjust the height and width of load paths such as rocker panels. “To be efficient, we don’t need joints to be infinitely stiff in every direction, but they do need to be stiff in a few directions,” Truskin explained. The SLM software lets engineers understand that, so they can eliminate excess material that is provided stiffness in directions that don’t contribute to the goal of creating necessary strength.By doing this very early in the process, Truskin says that SLM lets engineers account for expected future variants on the platform, so that when it is time to develop those, the body structure doesn’t require as much change or reinforcement because the requirements for the different configuration are baked into the fundamental design.

“We do it very early, before we have any CAD at all,” he said. “We only need to know where the powertrain is and where the hard points are for the load paths.”

Using the SLM has provided two key benefits, according to Truskin. The first is an accelerated development process. “It is speeding up the process to understand where the load paths need to be so we can speed up our tradeoff studies,” he said.

Tradeoff studies are the next step in the process, when body structure designers weigh various and sometimes conflicting requirements for space, weight, crash structure, cost and other variables to determine the best combination, Truskin explained.

The second benefit is that it lets the engineering team focus quickly on where they need to do additional work to yield improved NVH. “Generally, NVH standards are increasing in passenger vehicles,” he said.

Optimized stiffness also lets engineers specify stiffer suspension bushings because the improved body structure does not require as much help isolating vibration from the passengers, and these stiffer bushings improve vehicle’s steering responsiveness.

And, of course, eliminating excess mass that provides unnecessary stiffness lets the resulting vehicle be lighter and more fuel efficient.

So far, no new Fiat Chrysler models have hit showrooms that benefited from the SLM, so we will have to wait to see the results for ourselves.