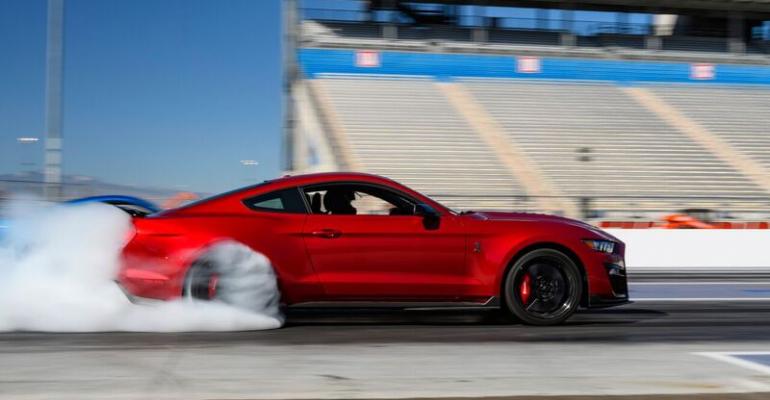 Ford's fastest-ever Mustang shows the value in carefully tuning even the best parts to get the most from them.

“It was a lot of blood, sweat and tears from the team,” for the new 2020 Ford Mustang Shelby GT500 to achieve its astonishing levels of power, performance and capability, stated chief program engineer Ed Krenz.

The 760-horsepower, 625-lb.-ft. supercharged 5.2-liter double overhead cam V8 engine transfers power seamlessly through a 7-speed Tremec TR-9070 dual-clutch transmission to accelerate the car to 60 mph in 3.3 seconds and through the quarter mile in 10.7 seconds. Our own test runs at the LVMS drag strip testing the Shelby’s impressive launch control system produced a pair of 11.4-second runs, so we didn’t spend any more time in pursuit of a few more tenths of a second.

The car boasts an incredible list of top-drawer components, because nothing less would have a chance to produce these results. Those impeccable parts contribute to the car’s astonishing performance numbers. But more important is the integration of those parts into a functional whole that is easy to drive fast thanks to the aforementioned engineers’ blood, sweat and tears.

This is in contrast to similarly powerful ground pounders, most especially the previous-generation 667-hp GT500 and the famously powerful 707-hp Dodge Challenger Hellcat and its 797-horsepower Redeye and 808-hp Demon iterations.

Those are cars that boasted impressive power, but struggled to make use of their muscle. Ford cast the 2014 GT500 as a drag racer, taking journalists to a drag strip to test its mettle but avoiding road racing courses.

Dodge might have followed the example, because while the different versions of the Challenger are all amazingly fast at the strip – the Demon famously finished the quarter mile in less than 10 seconds, earning it a letter banning it from NHRA-sanctioned races for being too fast for a car without a protective roll cage – none of them stop or turn in a way that inspires any kind of confidence.

It accomplishes that with a track wing aero package that produces as much as 550 lbs. of downforce at the rear of the car at 180 mph. Careful aerodynamic tuning at the Windshear rolling road wind tunnel in North Carolina ensured stable aerodynamic characteristics, while PowerFLOW computational fluid dynamics software from Dassault Systèmes modeled the cooling necessary for an engine producing this much power.

Indeed, Krenz reminds us that while the GT500’s net power rating is 760 hp, at redline, its 2.65-liter Eaton Roots-type supercharger is consuming about 100 hp, so the engine is actually creating 860 horsepower, and needs to shed a corresponding amount of heat.

That’s what the car does, with a front opening that twice the size of that in the Shelby GT350, which lets the GT500 expel more than 230 kilowatts of heat. Much of that vents through a central vent in the hood that measures 6 square feet. Even with that ventilation, air pressure beneath the hood is so high that the hood was visibly lifting an inch during high-speed runs, so they added locking hood pins to secure it separately from the regular latch.

That supercharger is Eaton’s latest, and it provides a maximum boost of 12 psi. It is an inverted design, placing the spinning rotors at the bottom of the device and the air-to-water heat exchanger for the intercooling system at the top. This helps tuck the blower more compactly into the valley of the engine’s vee, and it puts the heavy rotor shafts lower, contributing to a lower center of gravity.

Down at the bottom of the engine, oil drains into a conventional wet sump oil pan rather than a racing-style dry sump, as is used by the new C8 Corvette. With more space available beneath the engine in the taller Mustang body, Ford engineers simply upgraded the oil pan with side-saddle reservoirs featuring active hinged doors that trap oil to ensure a consistent supply during hard cornering maneuvers.

This all requires a huge amount of fuel, and Krenz tells us that while the GT500 was held to all of Ford’s regular durability tests, it got special dispensation for failing to complete the mandatory 30 minutes of full-power track testing. That was because the car emptied its 16-gallon fuel tank just 25 minutes into the test!

We similarly found that during track testing, the car’s fuel light warning of only 50 miles of remaining driving range illuminated very shortly after filling the tank, which translates to something in the neighborhood of 3.5 miles per gallon during track testing. The EPA says the Shelby is good for 12 mpg in city driving and 18 mpg on the highway.

To bring all this velocity to a halt, Brembo supplied monstrous six-piston front calipers that have 20 percent more swept area than even the huge Brembos on the GT350. With the enlarged 420mm (16.53-inch) rotors, the GT500’s front brakes possess 30 percent more thermal mass than the GT350’s capable front brakes. The rear brakes feature an interesting production application for 3D printing: an unglamorous bracket for the wire running to the car’s electric parking caliper.

With stopping thoroughly sorted, Ford turned its attention to making a car this big and heavy handle like a sports car. Incredibly, they achieved that goal. A primary contributor to that achievement is a magnificent magnesium front strut tower brace that reinforces the front suspension’s stability despite the enormous forces at work.

Designing and casting the magnesium brace took the expected amount of effort, and was straightforward, Krenz reported. What was unexpected was the subsequent interaction between the magnesium brace and the steel strut towers to which it is bolted. The dissimilar metals caused corrosion to erupt in test cars, and not just in wet rainy climates. Just regular summer humidity was enough to cause corrosion. The Ford team found a solution with coated washers that isolate the two metals from one another, Krenz said.

The cornering force that is trying to twist the GT500’s body out of shape and is being resisted by that brace is generated through the car’s 20 x 11-inch wheels wrapped in 305/30R20 front and 315/30R20 rear Michelin Pilot Sport Cup 2 tires for maximum grip. The BWI Magnaride actively adjustable dampers and larger 36mm front and rear anti-roll bars help preserve an even keel when cornering or braking, without the pitch and roll exhibited by the previous edition or the various Challenger models.

Just as the braking is stable and confidence inspiring at the very limit, so the steering is remarkable precise, letting the driver place the car exactly where it should be, and with the stunning grip of the Michelins, allows the GT500 to carry unexpected speed into corners and maintain its composure.

Engineers attribute a portion of this precision to the carbon fiber wheels of the carbon option package. When wheels get as large as these 20-inchers, there is a substantial amount of deflection at the rim under hard cornering loads which contributes to vague steering response in most such cars. The added stiffness of the carbon fiber wheels is their primary advantage over the forged aluminum wheels on the base car rather than the reduced unsprung mass and rotational inertia, which are commonly cited as the benefits of such costly wheels.

Another problem normally found with tires as wide as the 305mm-wide fronts on the GT500 is a tendency for such cars to follow road surface imperfections rather than tracking straight down the road. This is often called “tramlining” after the effect of a tram following its tracks, though Krenz refers to it as “rut wander” as the affected cars follow the usually unnoticed ruts that occur in the wheel tracks of many highways.

Ford avoided this problem in the GT500 by dialing in additional trail in the steering hub uprights, also known as spindles, knuckles or kingpins. This added trail comes from increasing the castor angle, or fore/aft tilt of the upright from a vertical axis, which strengthens the car’s inclination to self-center its steering. This increases both steering effort and the feel fed back to the driver’s hands for what the tires are doing at potential expense of heavy steering at parking lot speeds. But with power assisted steering, that side-effect isn’t noticeable.

What is noticeable is that while cars with fat front tires like top of the line Porsche 911s and Dodge Challengers can wander in their lanes like distracted dogs on their leashes, the GT500 tracks true to its intended course, which is much less fatiguing for the driver.

This solution worked so well that Ford decided to apply the new steering geometry to the GT350 too. Some of the other hardware bits seem like they might also be candidates to filter down to the lighter, naturally aspirated Shelby.

They will help improve that car too, but only if they are applied with the same thoughtful engineering work that tunes the parts as perfectly as the GT500 assemblage of high-performance components has been. It is unusual for a car with such superb componentry to deliver more than the sum of its excellent parts, but that’s exactly what the GT500 has done. This is the poster child for the value of properly engineering a car rather than simply throwing check-list hardware pieces at a performance model and expecting good results.