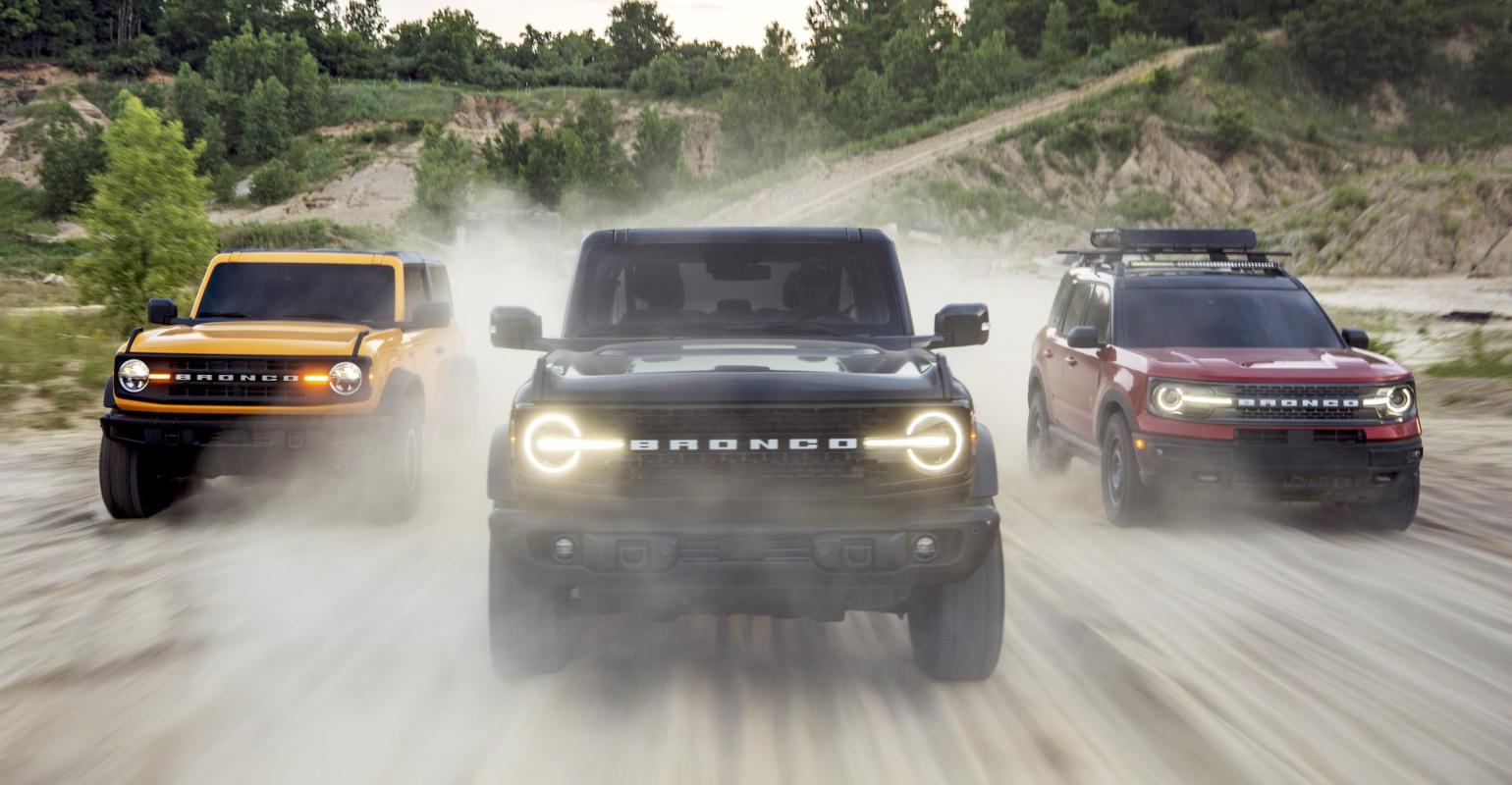 Start Slideshow ›
2021 Ford Bronco family
After nearly a quarter-century of waiting, Ford Bronco fans finally get a look at the new version of Ford's classic off-road challenger to the Jeep Wrangler.

At long last, Ford has officially unveiled the new version of the company’s Bronco off-roader. It is relaunching Bronco as a family of vehicles, as it was during the 1980s, but refocused on the hard-core off-road roots of the original 1966-’77 version.

The new Ford Bronco arrives as a body-on-frame 4x4 derived from the Ranger pickup’s platform, in two-and four-door body styles. In the early days, two doors were seen as a necessary ingredient for the “sport” component of sport utility vehicles (a phrase coined in the original 1966 Bronco’s press release!), but over the years the “utility” of a more useable back seat with its own set of doors has made four-door SUVs more popular.

And in the spirit of the 1983-’89 compact Bronco II, Ford is also launching a compact unibody Bronco Sport model that is built on the underpinnings of the Escape, with suitable upgrades to provide credible off-road capability. “It is not just an Escape with bigger tires!” insisted Bronco Sport chief engineer Adrian Aguirre.

Both vehicles channel the boxy lines of the burly first-generation Bronco that is so beloved by off-road enthusiasts, tapping into the current popularity of rugged 4x4s even among buyers who are as likely to drive into hot lava as take their trucks off roading.

The “real” Bronco is the meat of this announcement. The two-door version will be the superior off-roader, thanks to is shorter length, which improves maneuverability and reduces breakover angle when crawling over obstacles. The four-door will be more popular for its ability to carry passengers more comfortably, and Ford has debuted an impressive new technology to help this longer machine make tighter turns when necessary.

All Broncos, two-doors and four doors, regular and Sport, will be four-wheel drive. The Bronco’s base 4x4 system features a two-speed electronic shift-on-the-fly transfer case, while the optional advanced system includes a two-speed electromechanical transfer case. The upgraded system can switch automatically between 2 High and 4 High on the fly, keeping the Bronco secure when roads turn slippery. Both 4x4 systems enjoy Dana axles front and rear. The rear is a Dana AdvanTEK solid axle and the Bronco’s independent front suspension (the Jeep Wrangler has a solid front axle) employs a Dana AdvanTEK independent front differential unit.

Extending the theme of using respected off-road components, Bronco buyers can add the optional Spicer Performa-TraK electronic locking differentials for improved traction over rough terrain. These familiar components such as the transfer case for true four-wheel drive with low range, Dana axles and Spicer locker do not mean that Ford is eschewing cutting-edge technology on the Bronco. Indeed, the new 4x4 can include as many as seven different driver-selectable Terrain Management programs, including Normal, Eco, Sport, Slippery and Sand, with Baja, Mud/Ruts and Rock Crawl for off-road driving.

There is also Trail Control, which is a low-speed equivalent to cruise control, for use during low-speed trail driving, and Trail Turn Assist, the aforementioned turning-tightening technology. Trail Turn Assist works like the split brake pedal on farm tractors that let the driver brake only the inside wheel to help the tractor pivot on that stationary wheel. Trail turn assist applies the brake to the inside rear wheel and sends torque to the outer rear wheel, delivering that farm tractor-grade pivot when needed.

Bronco’s Trail One-Pedal Drive lets the brawny 4x4 drive like a frugal electric vehicle, with the gas pedal controlling both acceleration and deceleration “for more precise and confident slow-mode rock crawling,” according to Ford.

For offers a standard 270-horsepower, 310 lb.-ft 2.3-liter EcoBoost inline four-cylinder engine and an optional 310-hp, 400 lb.-ft. 2.7-l EcoBoost V6 engine. The main transmission is a 10-speed planetary automatic and a 7-speed H-pattern manual gearbox is optionally available. The “granny gear” first gear in the manual transmission produces a crawl ratio of 94.75:1. The automatic’s crawl ratio is 67.8:1, but that transmission benefits from the torque multiplication and the slippage permitted by the hydraulic torque converter, so it doesn’t need the manual’s low ratio.

The chassis is built on the Ranger pickup’s fully boxed steel frame with independent front suspension that provides 17 percent longer suspension travel than that of the solid-axle Wrangler. The solid rear axle is mounted with five locating links for its coil springs and both ends are controlled by external reservoir Bilstein off-road shock absorbers. 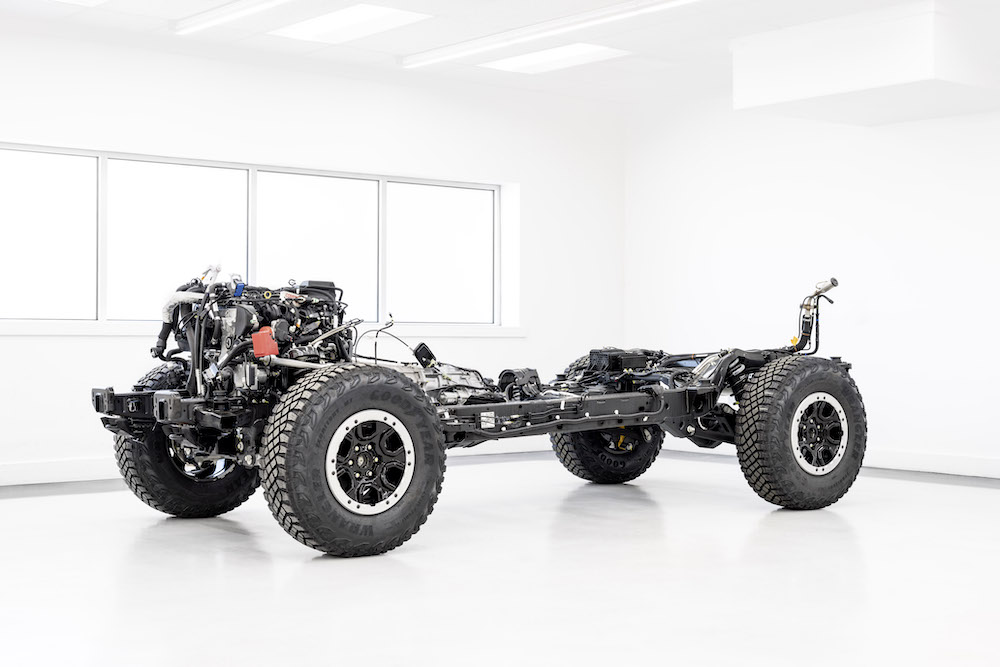 Vulnerable under-body components are guarded by strategically placed steel shields. The higher-capability versions get an available front bash plate, plus shields for the engine, transmission, transfer case and fuel tank. Rock crawlers will also want the available side rock rails, which are strong enough to support the weight of each side of the vehicle. The tires are Goodyear Territory off-road rubber, custom-tuned for the Bronco.

One feature of the Wrangler that has contributed to its exploding popularity is the fact that it is a convertible in a world of hard top vehicles. So Bronco mirrors Wrangler’s removeable folding soft top and hard top options as well as its removeable doors.

Ford points out that Bronco’s doors, though slightly heavier than Wrangler’s, have frameless windows. That makes them easier to lift away from the truck and makes them small enough to stow in the Bronco’s rear cargo hatch.

The compact Bronco Sport is based on the popular Escape family crossover, but it has spent time training at the climbing gym to bolster its rock-climbing credentials. Bronco Sport is not a convertible, so the roof doesn’t come off. But it does rise upward in the rear to provide clearance sufficient to contain a pair of 27.5-inch mountain bikes securely in the cargo hold where they are safer from theft than on an exterior bike rack.

This is just one example of how Bronco Sport is designed to support drivers who have an active outdoors lifestyle that involves driving in challenging conditions to get to the destination more than off-roading for the sake of off-roading. The all-wheel drive system lacks a transfer case and low range, but substitutes a twin-clutch rear-drive unit that even includes a differential lock for serious off-road capability.As with Bronco, Bronco Sport’s Terrain Management system features Normal, Eco, Sport, Slippery and Sand modes as standard equipment, with Mud/Ruts and Rock Crawl modes available on the high-capability trim levels.

Bronco Sport’s base engine is a 181-hp, 190 lb.-ft., 1.5-l EcoBoost inline four-cylinder engine and the upgrade is a 245-hp, 275 lb.-ft. 2.0-l EcoBoost I-4 engine. Either way, the transmission is an 8-speed planetary automatic.The challenge for fans will be waiting for the Bronco and Bronco Sport to reach dealers’ lots and their own driveways. No word on the Bronco Sport’s pricing, but Bronco starts at $29,995 for the base-level two-door model, plus $1,495 destination and delivery charge. All we can do now is wait.