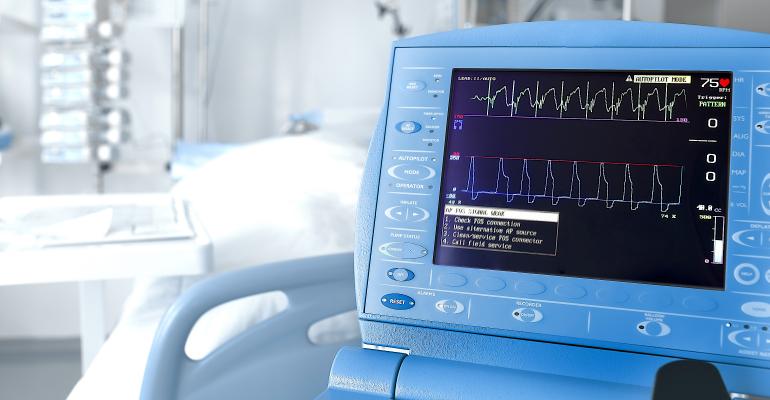 Researchers have used a carbon nanotube fiber they developed eight years ago to fabricate smart clothing for a variety of uses, including this EKG heart monitor.

Many people like to monitor their heart or pulse rate using some kind of wearable system when they are working out. However, right now the current options for doing so include the somewhat cumbersome options of wearing a chest strap or a smartwatch or other smart device on the body.

Now researchers have used a carbon nanotube fiber they developed eight years ago to create a thread that can be used to fabricate smart clothing that can connect wirelessly to a device that can take a continuous EKG of the person wearing it.

Related: Bio-Metal Is Stronger and Lighter Than Titanium With 50 Percent Renewable Resin

A team from Rice University’s Brown School of Engineering developed a conductive nanotube thread that has the same capability as metal wires but can be woven into clothing that’s comfortable, washable, and flexible enough to withstand body movements--such as those people perform when exercising, researchers said.

The fibers can be machine-sewn into fabric just like standard thread in a zigzag stitching pattern allows the fabric to stretch without breaking them, researchers said.

Specifically, Rice researchers developed a smart shirt with thread woven into fabric that embeds EKG capabilities; it also can also be used to embed antennas or LEDs, they said. By making modifications to the fibers’ geometry and associated electronics also could eventually allow clothing to monitor vital signs, force exertion, or respiratory rate.

Researchers in the Brown lab of biomolecular engineer and professor Matteo Pasquali developed the thread, which was built out of carbon nanotube fiber developed in the lab in 2013. However, the original nanotube filaments, at about 22 microns wide, were too thin to be used in a sewing machine.

The team, which included Rice graduate student Lauren Taylor, first tried to weave a thread out of the filaments by hand, with little success. In the end, they used a machine designed to make ropes for model ships to create a thread from the filaments that could be sewn, she said. 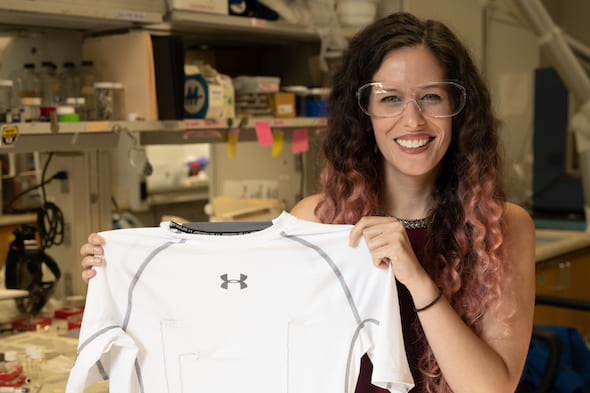 Rice University graduate student Lauren Taylor shows off a shirt made with carbon nanotube thread that provides constant monitoring of the wearer’s heart.

The seller of the machines “was able to make us a medium-scale device that does the same,”  Taylor said. The resulting thread was comprised of essentially three bundles of seven filaments each and woven into a size roughly equivalent to regular thread, she said.

The fibers in the shirt provided not only steady electrical contact with the wearer’s skin but also served as electrodes to connect electronics like Bluetooth transmitters to relay data to a smartphone or connect to an EKG monitor that can be stowed in a user’s pocket, Taylor said.

The team published a paper on its work in the journal Nano Letters.

Other potential uses for the thread could include human-machine interfaces for automobiles or soft robotics, or as antennas, health monitors, and ballistic protection in military uniforms, she said

“We demonstrated with a collaborator a few years ago that carbon nanotube fibers are better at dissipating energy on a per-weight basis than Kevlar, and that was without some of the gains that we’ve had since in tensile strength,” Taylor said.