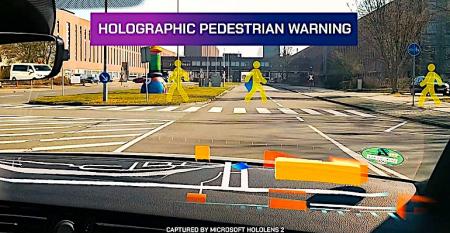 Microsoft Pairs with VW to Cure HoloLens Virtual Motion Sickness
May 09, 2022
Microsoft's HoloLens 2 augmented reality glasses worked fine when the wearer was stationary, but getting into a moving vehicle caused the...

17 VR Systems Ready for Gifting
Dec 15, 2021
Take a look at the wide variety of virtual reality systems that will put pizazz in your holiday.

The Fundamentals of AR and VR – and how the Military Is Using Them
Nov 22, 2021
The military has long deployed augmented reality (AR) and virtual reality (VR) tools to train soldiers. Here are the fundamentals

See the 9 Different Ways NASA is Testing AR/VR on the Space Station
Oct 07, 2021
It isn’t quite a Star Trek holodeck, but it is a step in that direction for ISS astronauts.

Facebook Enters Smart Glasses Market. Do you know the Competitors?
Sep 15, 2021
Read our takeaways about the state of smart glasses technology in today’s market.

Have You Seen These Amazing Vibrant Trends in Electronic Displays?
May 28, 2021
See the latest OLED, microLED, VR/AR, flexible tech, and other displays.

Augmented Reality Moves to the Wrist
Mar 26, 2021
Nerve signals from Facebook’s wristwatch will control augmented reality (AR) devices. But what about the glasses?
Load More