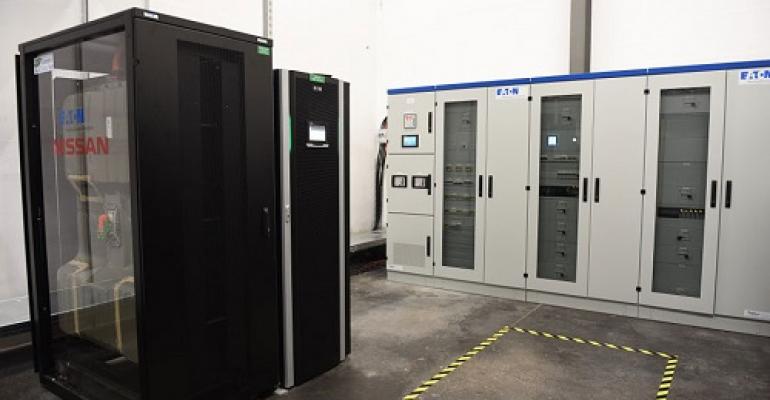 With the large-scale penetration of renewable energy, both at the utility and residential levels, comes a number of challenges, including integrating this capacity, with its unique, intermittent characteristics, onto the grid.

At the same time, with millions of electric cars expected to hit the road in the years to come, some concerns have been raised about a potential battery waste problem. According to Ajay Kochhar, CEO of Canadian battery recycling startup Li-Cycle, if EV growth proceeds as expected, we could be looking at something like 11 million metric tons of lithium batteries entering the waste stream by 2030.

Automaker Nissan and electrical equipment maker Eaton have teamed up to produce the xStorage Home system, which could be a solution to both problems.

More than 100,000 Leafs have been sold in the US, Europe and Japan since the car’s introduction in 2010. Experience has shown that as the 30kW lithium-ion batteries age, their capacity falls off to 70-80% of what they were when new, which impacts their ability to charge quickly, as well as the amount of power they can deliver for acceleration. In order to maintain customer satisfaction, the batteries are replaced at this time. Because vehicle battery requirements are far more stringent than those used for home storage, the batteries that have been removed have more than enough capacity for this, less demanding application.

The xStorage Home system gives those batteries a second life inside of homes and businesses as backup and solar storage batteries. In conjunction with the Nissan batteries, which can also be provided as new, with higher capacities, Eaton provides the electronic interface that manages all the various functions required to interface the battery with the connected loads, the solar panels, and the grid. Eaton has been making uninterruptible power supply (UPS) systems for over 50 years and they draw heavily on that capability for the xStorage Home.

“We’re using our UPS technology … as the brain, because in those critical power situations like data centers, hospitals, etc., they’re always making that tradeoff between whether to go to backup power or take the grid power—how best to optimize for the best quality power,” said Jonathan Hart, head of corporate communications for Eaton. “Taking that, now in conjunction with the batteries to create a fully integrated system, really optimizes both the battery performance and the interaction with the grid.”

The grid-connected batteries are intended to be used either in combination with rooftop solar, to extend the time when the panels can contribute, or to offset grid consumption in areas with time of day pricing. Solar panels can be connected directly into the xStorage Home system with no inverter required. Systems with a pre-owned battery will carry a 5-year warranty, while system with new batteries will be warrantied for 10 years.

The system that is based around a “second life” battery has a nominal capacity of 4.2 kWh and is based around a lithium manganese oxide (LMO) battery chemistry. There are two options available with new batteries, with capacities of 6.0 Kwh and 7.5 kWh respectively. The new batteries are built around a lithium nickel manganese cobalt oxide (NMC) formulation. According to Hart, the additional capacity is provided by adding additional cells.

For commercial use, the Eaton Nissan xStorage Buildings are designed so that the modules will fit a standard rackmount form factor.

The two primary benefits for both the commercial and residential customers are renewable storage and peak shaving. Peak shaving is a response to the fact that many utilities charge their customers, particularly those with commercial and industrial usage, demand charges. These are rates that vary with the time of day. For these customers, electricity costs more during periods of peak demand. Using the battery can allow the batteries to be charged during low cost periods to be used during higher cost periods.

Some of the industrial-scale installations can run as high as 4-5 MW. One example is the Amsterdam ArenA, where soccer matches and concerts are held. The system has 4MW of power capacity and 4 MWh of storage. As an added benefit, the system provides power to the surrounding community during periods when the arena is not being used.

One final benefit that these systems, especially those at grid-scale, can provide, which are not always discussed is a whole suite of grid services that would be difficult to obtain elsewhere. These are capabilities that help to stabilize the grid, like frequency regulation, demand-side management, and voltage firming. By using batteries for these transient-related functions, power can be dispatched instantaneously, as opposed to other generated sources that take time to spin up. Using batteries is also preferable to relying on peaker plants, from an efficiency perspective, where enough capacity is available.

As our electricity grid continues to be transformed into a cleaner, more flexible system, storage will continue to play an increasingly important role.