HomeElectronicsResearchers Develop Battery-Free Smart Toys for Kids
Recent
Electronics
Q&A With IndyCar Gearbox Expert Anna Chatten
May 13, 2022
Intel Unveils Trust Authority to Boost Security
May 13, 2022
Supplier News Looks at Highly Customizable Industrial Monitors
May 12, 2022
Here Technologies Maps are Key to Mercedes Level 3 Automation
May 12, 2022
POLL
'We Built the Domino's Pizza Tracker for Manufacturing'
May 12, 2022
Break Your Bubble Gum Habit by Watching Its Production
May 12, 2022
This Patch Monitors All Your Vitals, Including Blood Pressure
May 12, 2022
First E-Skin to Anticipate, Perceive Touch from All Directions
May 12, 2022 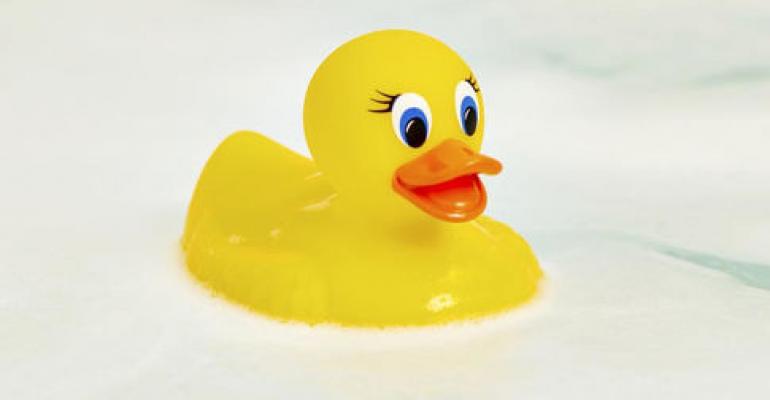 Researchers in South Korea have incorporated TENG energy harvesters into children’s toys to eliminate the need for batteries in these devices.

Any parent knows the frustration of having to constantly replace batteries for your child’s favorite toy. Now, that problem may be solved with research from South Korea, where a team has applied a common energy-harvesting method to provide power for electronic toys and other mobile devices.

Researchers from Jeju National University in South Korea have incorporated triboelectric nanogenerators, or TENGS, into rubber ducks and clapping toys. TENG energy-harvesters use the triboelectric effect—basically the charge generated when two materials rub together, as in static electricity—to create energy.

While the team has so far used them only to power LEDs that provide lighting in toys, they aim to provide energy for other functions in the future as well, said Arunkumar Chandrasekhar, post doctoral fellow at the university and a lead author on a paper about the work published in the journal ACS Sustainable Chemistry and Engineering.

“The core finding of our work is to exhibit real-time biomechanical energy scavenging and its immediate usage for an interesting application in toys, and also to demonstrate an easy way to commercialize a TENG device,” Chandrasekhar told Design News.

TENG-based power sources are well-suited for toys because of the natural movements children make when using them, such as shaking and squeezing, which activate the energy-harvesting devices, Chandrasekhar said.

“By age 4, every child has had contact with an electronic toy or mobile device, according to the American Academy of Pediatrics,” he said. “These devices required a power source—batteries—that needs to be replaced or recharged. We have explored an alternative way to harvest energy when children play with their toys and that can be used for lighting LEDs that are built into the toys,” he added.

Researchers developed the energy harvesters with aluminum electrodes with an eco-friendly silicone film between them. Squeezing or shaking the toys alternatively separates and brings the electrodes into contact with film, creating an electrical charge. Once activated, the TENGs harvested enough biomechanical energy to illuminate several LED lights attached to each toy.

Chandrasekhar said TENGs were a natural choice for providing power in toys because of their versatility and the relatively low cost associated with building them.

“TENG devices are one of the best solutions to meet low-power electronics requirements because they can scavenge energy from various sources—water wave, wind, biomechanical, vibration, rain drops, and so on,” he said. “The development of a TENG device is comparatively simple, cost effective, and bio-compactable in most cases. For less than $1, we can fabricate a device which can drive low-power electronic components, such as LEDs and LCD.”

The TENGs the team designed for the toys also are durable, allowing them to operate for substantial periods and under the sometimes rugged conditions children’s toys experience. Creating toys without batteries also means children won’t have contact with the harmful chemicals that are found in the lithium-ion batteries currently used to provide energy to toys, Chandrasekhar said.

Toys aren’t the only devices that can benefit from the use of TENGs. The team believes that wearable electronics and medical devices also can use the harvesters they developed, as do other scientists who have been experimenting with this type of energy harvesting.

To that end, the Jeju National University team has filed patents associated with its research and aims to commercialize the use of TENGs as power sources for toys and other devices, Chandrasekhar said. “Once we make industrial collaborations for mass production of these products in the near future, these smart toys will be available to the market,” he said.