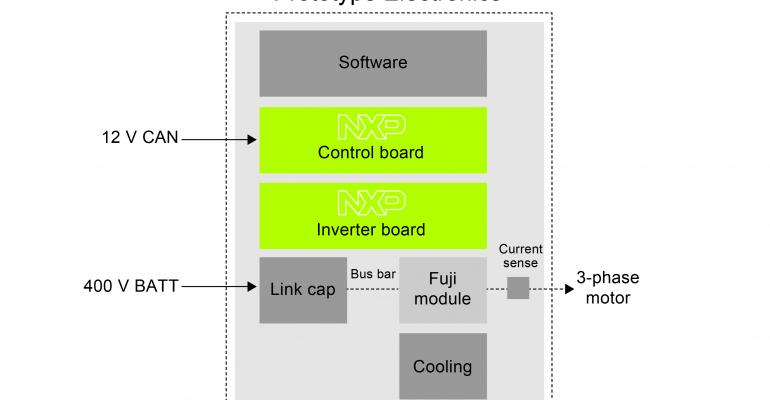 Semiconductor maker wants to speed and simplify inverter control for automotive OEMs and Tier Ones.

NXP Semiconductor N.V. upped its commitment to automotive electrification this week with the debut of a power control reference platform for developers of motor inverters for electric cars.

The Power Inverter Reference Platform is, in a sense, a twist for the auto industry, which has not had a dedicated turnkey platform of this type to date. Up to now, OEMs and Tier One suppliers typically pieced together their own solutions using components from various sources. “They’ve been stitching it together themselves using their microcontroller vendors and their power management device vendors, along with gate drivers and IGBTs (insulated gate bipolar transistors),” Rick Beale, a senior marketing director for NXP, told Design News. “There’s not really been a platform like this.”

NXP refers to the new product as a “reference enablement platform,” and hopes that OEM engineers will develop their traction motor control applications on top of it. The platform includes a motor control MCU, power management device, IGBT gate drivers, CAN transceiver for communication, and application-specific software. NXP partnered with Vepco Technologies, Inc. on development of the platform using an IGBT power module from Fuji Electric. The company said, however, that the platform is compatible with IGBTs from other suppliers.

The aim is for the platform to help OEM and Tier One suppliers speed the development of their traction motor inverters. That could be important as the electrification race continues to heat up, because the development of control platforms for motor inverters can be a complicated and lengthy task. Inverters, which convert DC battery voltage to multi-phase AC, call for complex control schemes to accommodate various vehicle speeds and accelerations.

Up to now, suppliers haven’t offered a turnkey solution for such needs. “Most of the talk has been focused on the power delivery—the power switch—which is an IGBT,” Beale said. “No one’s been talking about the control.”

NXP felt it could pull the solution together, however, largely because it already has so much of it in house. For the new platform, NXP supplies the motor control MCU, power management “system basis chip,” gate drivers, CAN control board, inverter board, and enablement software.

“All of the components are coming from us except the IGBT power module, which comes from Fuji,” Beale said.

The motor inverter platform introduction, which was announced on November 7, arrived in tandem with a separate NXP rollout of a new Battery Cell Controller portfolio. That portfolio includes two battery cell controllers (MC33771B and MC33772B), which can be combined with the company’s MCUs and power management chips to help control energy storage in electric vehicles.

Together, the two introductions signal a deeper move into automotive electrification for the Dutch semiconductor giant. “We’ve been pretty quiet in the area of electrification up to now,” Beale said. “But the news here is we’re raising the bar. We see this as a long-term future.”