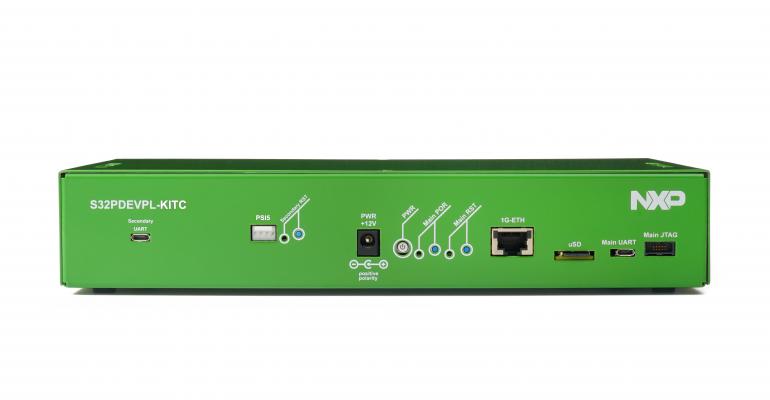 NXP Semiconductors is rolling out a development platform aimed at helping automakers and suppliers accelerate the design of next-generation hybrids and electric vehicles.

Known as GreenBox, the new platform enables engineers to develop the complicated control algorithms that will be needed for electrified powertrains over the next few years. “There’s a sense of urgency with HEV and EV applications,” Brad Loane, automotive MCU product manager for NXP, told Design News. “There’s a lot of demand from OEMs and Tier Ones for more intelligent solutions.”

GreenBox would provide that intelligence by enabling engineers to design and test the algorithms that underlie the control of the electric motors, internal combustion engines, battery management systems, and other key parts of an electrified vehicle, before the vehicle comes out. It’s based on NXP’s ARM Cortex-based S32 computing platform and includes a hardware development board, peripherals board, software and operating systems for standardized architectures such as Autosar.

The product’s signature green box would not be employed in the vehicle itself, but rather would serve as a development platform, enabling engineers to integrate an electrified vehicle’s functions onto a chip. “We see an opportunity for many of the vehicle’s applications to be integrated,” Loane told us. “Even today, we’re already starting to see situations where the traction motor and DC-to-DC converters are being addressed by a single MCU.”

Loane acknowledged that some vehicle applications, such as internal combustion engines and electric motors, might require separate chips due to reasons of proximity. But, he said, the ARM-based S32 processors have sufficient computational power to handle all such functions. “In theory, you could have everything handled by a single chip,” Loane added. “This offers a lot of integration capabilities.”

The GreenBox product comes at a time when automakers around the world are broadening the electrification of their vehicle lines due to government mandates. US automakers, for example, must meet a corporate average fuel economy of 54.5 mpg by 2025. Similarly, Norway has announced that all of its vehicles must be zero-emission by 2025; India has called for the same by 2030; The Netherlands wants 50% EVs by 2025; and China has said it plans to stop production of gasoline-burning cars at some point in the coming decades. In all cases, hybrids and pure electric cars are expected to play a big role in meeting those government requirements.

GreenBox, which rolled out on February 20, would serve as an early development tool in such efforts, enabling engineers to get a jump start on NXP’s planned announcement of a specialized silicon platform later this year.

The product comes in two configurations. One is targeted at fully electric vehicles. It supports such functions as motor control and battery management. The other is for hybrids. The hybrid version supports the functions of both electric vehicles and internal combustion engines.

NXP says that the introduction of the platform is important now, given the pressure on automakers to accelerate their transition to hybrid and electric powertrains. “There’s a definite need in the market for more intelligence and performance in this area,” Loane said. “That’s what we’re addressing with GreenBox.”

At 95, John Goodenough Is Still Searching for the Next Big Battery Breakthrough