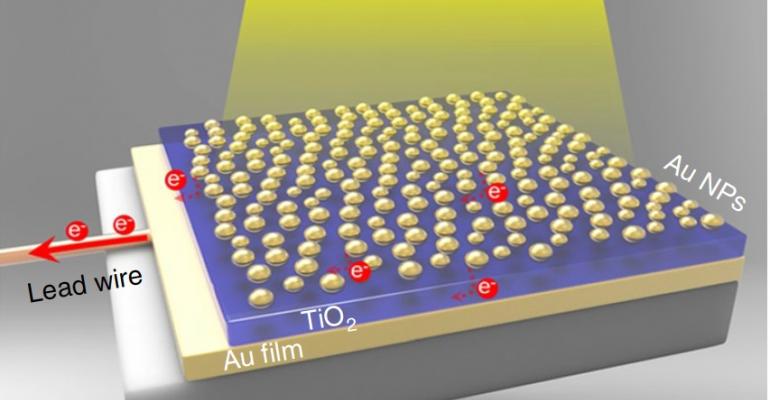 Hokkaido University researchers built a photoelectrode that works over a broad range of wavelengths to gain an order of magnitude improvement over previous efforts.

Solar energy has enormous potential to power our future. Each hour, the sun sends more energy to the Earth than we use during an entire year. The challenge has always been to convert the energy from the sun into electricity. Photovoltaic (PV) solar panels on most residential homes are about 15% efficient. The newest commercial PV designs are reaching 20 to 25 percent, while expensive military and space application PV cells can reach 30 percent efficiency or slightly higher. So when researchers at Hokkaido University in Japan claimed to reach 85 percent efficiency for the conversion of solar energy, people took notice.

Professor Hiroaki Misawa from the Research Institute for Electronic Science at Hokkaido University led the team, which has developed an experimental setup cell that uses gold nanoparticles loaded onto a 30-nanometer-thick titanium dioxide semiconductor layer. That layer is sandwiched between the gold nanometer layer and a 100-nanometer-thick layer of gold. When the system is exposed to light, the gold film works as a mirror. It traps the light in the cavity between the gold layer and the gold nanoparticles, allowing them to absorb more light over a larger spectral range than they ordinarily would.

“The light energy conversion efficiency is 11 times higher than those without light-trapping functions,” Misawa explained in a Hokkaido University news release. Misawa and his team theorize that the exceptionally high output from their solar cell results from a phenomenon called “localized plasmon resonance,” which absorbs certain wavelengths of light through a resonant oscillation of conduction electrons. “Our photoelectrode successfully created a new condition, in which plasmon and visible light trapped in the titanium oxide layer strongly interact, allowing light with a broad range of wavelengths to be absorbed by gold nanoparticles,” said Hiroaki Misawa in the news release.

The use of gold as a major component would not ordinarily help to reduce the price of solar energy. Yet the small amounts of expensive metal used to create nanoparticles and the thin mirror layers should not impose significant cost penalties. “Using very small amounts of material, this photoelectrode enables an efficient conversion of sunlight into renewable energy, further contributing to the realization of a sustainable society,” the researchers concluded in the news release.

The goal of the original research by Misawa’s group was to create a photoelectrode that uses sunlight to convert water into hydrogen and oxygen. The electrons from the photoelectric effect reduce hydrogen ions to hydrogen, while the electron holes oxidize water, producing oxygen. This synthetic photosynthesis shows promise in the development of a system to produce the hydrogen that could help yield a source of clean energy. It will be interesting to see how the use of gold nanoparticles can play a role.