FLIR's Thermal Sensors Are Coming to Self-Driving Cars in 2021 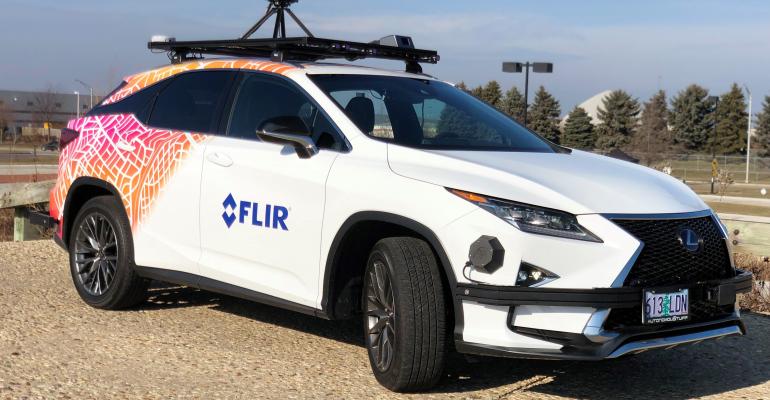 FLIR has entered into a partnership with Veoneer to supply thermal sensors for upcoming Level 4 autonomous cars.

FLIR will be adding its thermal cameras to level-4 autonomous cars slated to begin production in 2021. The thermal imaging hardware company has entered into a partnership with Sweden-based automotive electronics supplier Veoneer in which Veoneer will use FLIR's sensors in autonomous vehicles it will be helping to produce.

Last month Veoneer announced that it had entered into a contract with an undisclosed automaker to manufacturer and supply thermal cameras for a Level 4 autonomous vehicle. Under the deal with FLIR, the company's Boson model of thermal sensors will be included in the multi-sensor thermal array produced by Veoneer.

FLIR has highly touted the benefits thermal sensors offer to autonomous cars. In 2018 the company released a full open-source library of thermal imaging data to assist engineers of Advanced Driver Assistance Systems (ADAS). and autonomous vehicles in training the neural networks that will be quite literally driving these vehicles. FLIR says that combining thermal imagery along with LiDAR, radar, and visible light cameras can create more robust algorithms capable of more easily identifying objects and people.

In a previous interview with Design News, Mike Walters, vice president of micro-camera product development at FLIR, said that thermal cameras are able to see in complete darkness as well as other challenge situations. “Thermal cameras can see in absolute darkness and are also able to see in challenging lighting conditions, like driving directly into sun glare that 'blinds' human drivers and visible cameras. Thermal cameras also perform well in most types of fog, where visible cameras and LIDAR can struggle,” Walters said.

According FLIR, thermal cameras are able to reliably identify humans from up to 200 meters away – four times farther than typical headlights can illuminate – in rural conditions. The cameras can also provide additional information by capturing images from 360 degrees around the vehicle.

Level 4 autonomy requires a vehicle to be able to navigate roads – recognizing other vehicles, traffic signs, and hazards all on its own – but the vehicle must also have a steering wheel and systems for human intervention if necessary. Trucks with Leve 4 autonomy are already being testing on public roads in the US and other autonomous car efforts are also rolling out across the country. Beginning in November, Hyundia, for example, will begin a pilot program for an self-driving car ride-hailing service called Botride in Southern California.

There is no word on which auto company will be rolling out the vehicles with FLIR's thermal sensors, but one automaker that has been particularly bullish about its self-driving car ambitions is Ford. Back in 2016, The Big Three automaker said it was aiming to release a fully-autonomous car by 2021 (the year the Venoneer partnership vehicle will go into production).

Mounting challenges around achieving full Level 5 autonomy, however, have forced Ford and other automakers to reexamine their timetable for fully-autonomous cars.

In the past FLIR has been a key partner with Veoneer to support driver early-warning systems in vehicles from auto companies including GM, Volkswagen, Audi, Peugeot, BMW, and Mercedes-Benz. Perhaps one automaker sees thermal-sensing technology as a key component to keeping its self-driving vehicle ambitions on track