HomeElectronicsTo Build a Better Battery
Recent
Electronics
Mercedes-Benz Sustaineer Concept Electric Van Scrubs the Air While it Drives
Oct 28, 2021
Spooky Halloween Tech Is Here. Just Look at These Doozies
Oct 27, 2021
Halloween? What a Perfect Time to Think About Generating Electricity From Blood!
Oct 27, 2021
Ghosts of Medtech: What Ever Happened to These 7 Medical Devices?
Oct 27, 2021
POLL
How to Survive a Zombie Apocalypse
Oct 27, 2021
America's Supply Chain Crisis by the Numbers
Oct 27, 2021
Want Scary Stuff for Halloween? Check out the Tech for 2021
Oct 27, 2021
How Apple Influenced Medical Packaging
Oct 27, 2021

To Build a Better Battery 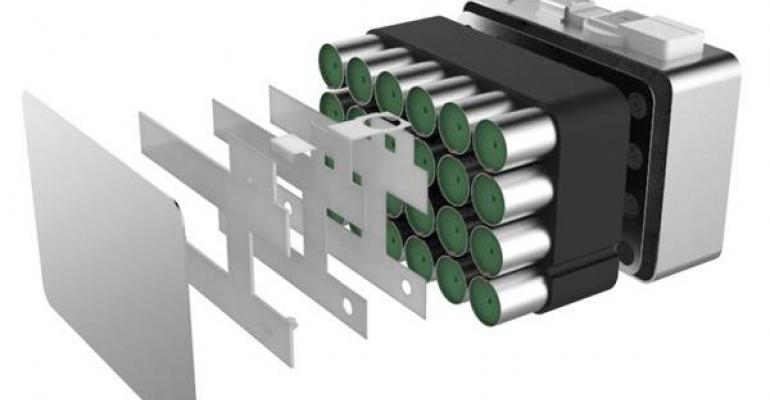 Batteries are like mousetraps: If you can build a better one, the world will beat a path to your door. In 2013, the Advanced Research Projects Agency-Energy (ARPA-E) created the RANGE Program, short for "Robust Affordable Next Generation Energy Storage Systems." The Department of Energy (DoE) had recognized that electrochemical energy storage (batteries) were going to play a vital role in future renewable power grids and electric vehicles. ARPA-E wanted to find a way to dramatically improve safety, energy density (translating to greater vehicle range), and cost.

One of the companies that accepted the RANGE challenge was a then-new startup called Cadenza Innovation. The small US firm was made up of world-recognized battery experts and led by Dr. Christina Lampe-Onnerud. With a Ph.D. from Uppsala, Sweden in inorganic chemistry, a post-doc assignment at MIT, and recent experience as the head of battery-maker Boston Power, Dr. Lampe-Onnerud saw that RANGE provided her startup with an opportunity to define some of the basic requirements that future lithium ion battery systems would be expected to meet.

A Chance to Define the Future

“I felt committed to the space and saw this opportunity to bring forward a platform that could lead with cost and safety, but that had to have the core property of high performance,” Dr. Lampe-Onnerud explained to Design News. “I took the opportunity to define high-performance as high volumetric energy density—meaning more energy in a given space than what you commonly see. I also had the chance to help define the concept the industry now considers safety. We could set a standard globally where a product can fail but never harm. In the battery world, that means you can have a battery stop working, but it can’t kill you, or explode, or start a fire in normal operating circumstances,” Lampe-Onnerud told us.

A large amount of lithium ion battery research takes place on the electrochemistry level—creating and testing new electrode and electrolyte materials, often in tiny coin-sized cells. The problem is that the sometimes promising results from laboratory testing don’t always work when scaled up to usable battery configurations. “Everyone gets so excited for the tiniest electron shift, forgetting that it takes a lot of work to get from that into real product,” said Lampe-Onnerud. “And then, when you have real product, it’s still not a done deal. You have to qualify into the existing platforms.” Instead of working on basic battery cell chemistry, Cadenza set out to find ways to improve the packaging of the entire battery system.

The Cadenza team noted that a small system defect of fault could initiate a large and potentially dangerous release of energy. When thermal runaway occurred in one cell, it could quickly spread to others, resulting in a fire that involved the entire pack. The Cadenza solution is called a “supercell.” It consists of a structure that holds the battery cells in place, which also separates them using a thermally insulating and fireproof material. The battery cells can be prismatic, pouch, or the cylindrical “jelly-rolls” that Lampe-Onnerud prefers for high energy density and ease in manufacturing.

“Basically, (we use) very high temperature ceramic fibers, and they are mixed in with insulation materials and with fire retardants. The process is a little bit like the one used to make egg cartons, but with ceramic instead of cellulose fibers,” Lampe-Onnerud said. “They are pre-shaped and shipped to the factory, and you ship in the jelly rolls and the metal pieces and then you assemble, activate the cells, and off they go!”

The ceramic fibers act as a fireproof thermal insulator between the cells, so if one cell experiences thermal runaway, it is less likely to spread to adjacent cells. The material bonding the supercell fibers together is also mixed with a fire-retarding material that is released if the structure reaches a critical temperature. Packaging smaller battery cells into standardized blocks allows the electrical connections to each cell to be simpler and more robust and reliable. Temperature activated electrical cutoffs can also be used to isolate the supercell blocks from one another in the event of thermal incidents.

The adaptability of the supercell is an important feature. “The architecture itself is chemistry agnostic. So that means you can commit robotics to the assembly of the cells without fearing that there will be a better cathode in years down the road. In fact, you just place it into the platform when it is commercially viable, price-wise,” said Lampe-Onnerud.

“This platform is incredibly simple to assemble and make this invention into the real thing. You can basically source less than 50 components globally and assemble it locally. So when the world goes into nationalism and protectionism, we have a platform that allows for domestic manufacturing,” said Lampe-Onnerud.

Costs are also contained using Cadenza’s concept. “Because it’s so simple to make, you are cost effective at very low volumes compared to traditional industries, where you had to have these gigantic factories. We get a lot of credit for the technical innovation, but this is actually—in my mind—maybe the bigger deal. The fact that we have disrupted the way batteries have always been thought of; You can now be a battery producer without having all of the expertise. We have created an ecosystem around this. So, I am very hopeful that we will have a chance to have an impact,” she told us.

“It is, of course a crazy time for this battery industry because you can hear of new inventions almost weekly, but you know that almost every invention that comes to light takes 20 years to commercialize. It’s not like every technology that’s announced is successful. It has to satisfy, of course, all of the elements of commercialization, which includes price, reliability of supply, and supply chain going into that product. But it also has to satisfy the ease of processing, which is non-trivial. I celebrate innovation and part of my goal is to make it easier to distinguish from real innovation to what could be an interesting technology,” said Lampe-Onnerud.

Recently, Shenzhen BAK Power Battery Co., Ltd. of China signed an agreement with Cadenza Innovation to begin producing lithium ion cells and modules using the Cadenza supercell configuration. The emphasis will be on battery systems for electric vehicles when production begins in 2019.

Dr. Lampe-Onnerud put the importance of the agreement in perspective. “In some ways, it’s a big deal because it potentially allows the lithium ion technology invention that was uncovered in the 1970s to finally deliver on that promise of high energy density, safety, and low cost,” she said. “And cost is of course critical at this point, where you have global energy markets in transformation. Energy storage is going to be critical—both to increase operational efficiencies and thus make more money in energy, and yet wean us off the dependence on fossil fuels. At the same time, we have another megatrend around the decentralization of electricity in general,” she explained.

“With the emerging technology breakthroughs that are now being commoditized, and deployed, with electric transport—and with an attention to detail on how electricity is distributed—we hit two-thirds potentially of climate change hazardous emissions,” she said. Dr. Lampe-Onnerud is optimistic. “I am fairly convinced that if we execute well, if we stay on course, and we work very closely with our ecosystem, we could have an opportunity to transform at least a little piece of this very complicated climate puzzle that we are basically facing.”