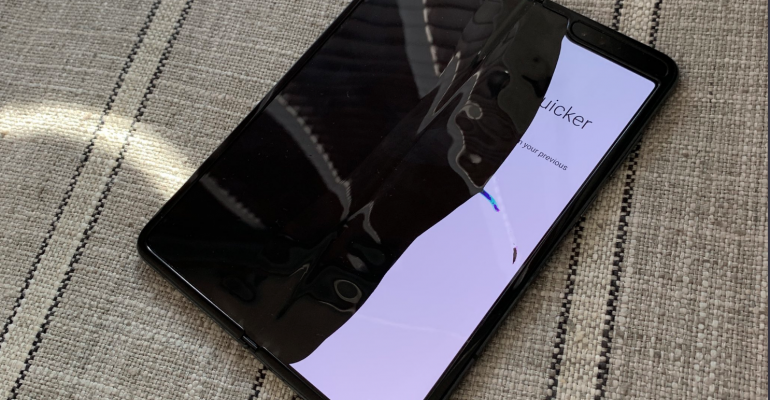 A design flaw has forced Samsung to indefinitely delay the release of its highly-anticipated foldable smartphone.

If you're thinking of being among the first in your social circle to own a foldable smartphone you're going to have to wait a longer...and you actually should. Samsung's highly-anticipated Galaxy Fold has been running into some serious design issues that are causing screens oin review units to fail. The Wall Street Journal has reported that Samsung is pushing back the Fold from its anticipated April 2019 release date. No new release date has been announced.

When Samsung debuted the Galaxy Fold in February, its folding screen was being anticipated as the coolest thing to hit mobile phones since the touchscreen...at least until futuristic, ultra-thin, fully-flexible displays are realized. Samsung has touted the $1980 Fold for its versatility and ability to offer easier and more intuitive multitasking and workflows for users. The phone features a 4.6-inch screen that opens into a 7.6-inch dual display.

But days after reviewers got their hands on early test units of the Fold, news began coming in that screens were breaking. In a hands-on review Dieter Bohn, executive editor at The Verge noticed a bulge appearing underneath the phone's screen after only a day of use. This bulge appeared right in the noticeable crease that appears at the fold of the phone. Bohn suspected this was a piece of debris or a part of the phone's hinge mechanism that had broken lose, eventually damaging the screen itself.

More and more complaints began coming in from other reviewers regarding various instances of the screen failing in a variety of ways from freezing and flickering to blacking out completely.

Android Central has released a video outlining the timeline of what it's calling “Foldgate:”

Though there's no full technical teardown of the Galaxy Fold available, these display failures may not come as much of a surprise to those who paid attention to even the small amount of technical information released by Samsung. Creating a bendable display required Samsung to use plastic instead of glass – more precisely what appears to be a proprietary polymer substrate with OLEDs embedded in it. Samsung also noted that to accommodate the phone's folding capability it had to make the Fold's display only about half as thick as a typical smartphone's.

Add to this a hinge system developed just for the Fold, one that hides multiple interlocking gears, and it's easy to see where there might be trouble in paradise. While one hopes Samsung's engineers had found a solution to this, it's easy to imagine either the screen, the hinging system, or both giving out in some way after repeated folds over time.

But likely no one was expecting it to fail as quickly as it did. And, this isn't the only issue reviewers encountered.

If you've bought a smartphone in recent years this should sound familiar: You unbox the phone and notice there's a plastic film protector over the screen. So what do most people do? They peel it off.

Turns out you are absolutely not supposed to do this with the Galaxy Fold.

Though it's a less serious issue, many reviewers noted the Fold has a plastic screen protector over the screen. Apparently it's relatively easy to remove, but consumers shouldn't be doing this as it is vital to the Fold being able to function. Removing the “protector” will actually cause the screen to black out and stop working. Samsung has said consumer releases of the Fold will include a warning about this. Let's hope everyone manages to read it.

Samsung is no stranger to high-profile product failures. Many will recall back in 2016 when the Note 7 was having issues with its lithium-ion batteries that were causing the phones to catch fire. The issue was so severe that major airlines banned the phones from flights.

This latest issue doesn't pose a critical safety hazard, but it does call into question the immediate viability of foldable phones. In a video on his own experience with the Galaxy Fold, popular YouTube tech review Marquees Brownlee noted that the Fold's failure calls into question how upcoming foldable phones like the Mate X from Huawei will perform. While the Fold keeps its screen tucked inside, the Mate X actually folds the other way, keeping the screen on the outside. While it's possible Huawei's phones won't have any issues, savvy consumers will likely be watching reviews of the Mate X very closely when it releases in June.

Samsung hasn't pointed to an exact culprit for the Fold screen failures, but has shared the same suspicions as reviewers. “Initial findings from the inspection of reported issues on the display showed that they could be associated with impact on the top and bottom exposed areas of the hinge,” Samsung said in an official statement. “There was also an instance where substances found inside the device affected the display performance.

We will take measures to strengthen the display protection. We will also enhance the guidance on care and use of the display including the protective layer so that our customers get the most out of their Galaxy Fold.”