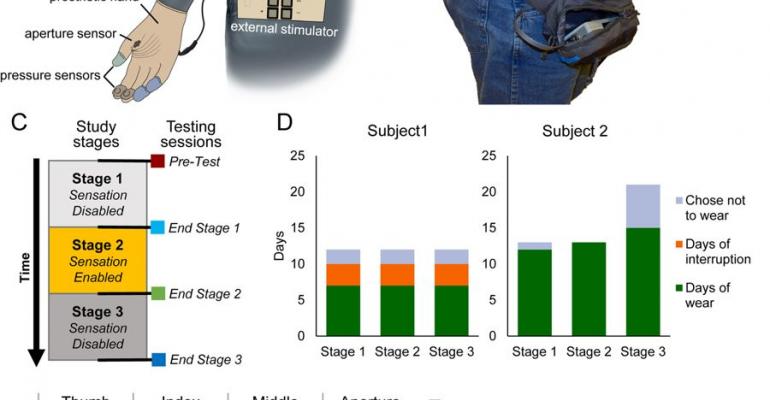 In testing a sensory-enabled prosthetic, researchers showed that an increased sense of touch gives users more psychological well-being and confidence to interact with their environments.

Designers of prosthetics often focus mainly on their mechanical capabilities, their ease of use, and their ability to provide natural movement. However, there is a psychological aspect that designers are beginning to explore through sensory-enabled prosthetics. Recently, a team at Case Western Reserve University discovered that a sense of touch encourages users to wear the prosthetics more regularly and for longer periods of time. They also feel more confident to interact with their environment and loved ones.

The team engaged in the first known study of amputees wearing advanced, sensory-enabled prosthetics in everyday life. These prostheses achieve a sense of “touch” using direct interfaces attached to the nerves of the wearers. The researchers found that by receiving sensory feedback from the hand, study participants used the mechanical appendage more often than a typical prosthetic.

Moreover, the amputees had more of a general sense of psychological well-being from the use of the hand, seeing it more as a typical hand and less as merely a tool to be used sporadically, said Dustin Tyler, a professor of biomedical engineering at Case Western Reserve and associate director of the Advanced Platform Technology Center at the Louis Stokes Cleveland VA Medical Center. "When they're in the lab, many subjects (in previous studies) have described their prosthesis as nothing more than a tool attached to the end of their residual arm," he said. Tyler worked on the research with Emily Graczyk, a post-doctoral researcher at Case Western Reserve University.

Two subjects took part in the study, using the hand at home with no restrictions put on its use. Both said that the sensory-enabled prosthetic improved their relationship with their environment, allowing them to do activities such as pick up a grandchild, pick flowers, button a shirt, or slice tomatoes in a real-life, interactive way.

Though sensory-enabled prosthetics have existed for about 10 years, those wearing them typically have tested them in a laboratory setting to demonstrate how restored sensation can aid in object identification and manipulation tasks, Tyler said. This meant that “once at home, they'd often end up putting a traditional prosthesis on the shelf,” he noted. “We found the opposite to be true when they had a sense of touch—they didn't want to stop using it." One of those tested in the research even noted that giving back the device after the study concluded was "like losing my hand all over again,” according to researcher interviews.

Using the prostheses more often and for more everyday tasks gave participants greater confidence in resuming tasks that they performed before the loss of their hands and in interacting with people in their personal lives, researchers found. From their observations, the researchers concluded that the psychological and emotional impacts of sensation are integral to improving the quality of life for amputees, they said.

The team plans to continue its work by implanting devices in users that can route neural connections through Bluetooth technology to allow the amputee to actually "feel" the new hand, Tyler said. This will give users an even more lifelike sensation and allow them a deeper interaction with the things around them and other people.

"When you add sensory feedback technology to something like a prosthetic hand, you add the most important thing that connects us together as humans—touch," he said. "That's a huge difference."

The team published a paper on their work in the journal Scientific Reports.