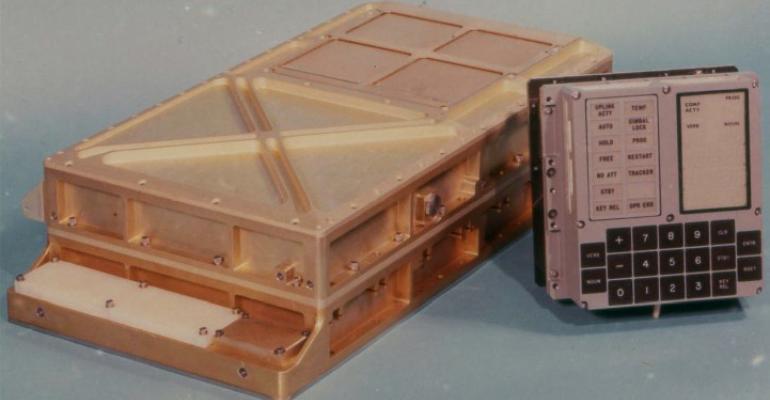 It was one of the first modern embedded systems. But here are some more details about the Apollo Guidance Computer you may not have known.

The Apollo flight to the moon would not have been possible without the support of mission control, engineering knowledge, and technical skills of the astronauts. In addition to these human talents, there was a small innovation that allowed the lunar module’s successful landing on the moon and return to earth: the Apollo Guidance Computer (AGC).

Developed around 1965 at the MIT Instrumentation Laboratory, the AGC is well known as one of the first modern embedded systems. But there are other details of this system that you might not have known:

1.) The AGC Was a Digital Computer

The AGC was designed as an airborne digital computer to control, test, and operate the Apollo lunar module’s guidance system. The general-purpose computer used a binary 15-bit format for parallel word transfer and instructions using single addressing mode. The AGC’s data and instructions were stored in memory. The memory structure consisted of several fixed thousand words and 1,000 words were erasable. Included with AGC was a small number of central addressable registers for data storage and two interrupts. The interrupts resolved efficient programming and real-time system requirements operation conflict concerns.

AGC computation designed used three input NOR logic gates packaged in microcircuit form. Bipolar transistors served as the core method of selecting erasable memory for the AGC. The circuit configuration of the erasable memory was accomplished with current drivers. Also, discrete diode-transistor circuits enable the fixed memory function of the AGC’s computer logic. The basic logic function of the NOR gate is where one binary 1 input will produce a binary 0 output. This logic gate function served as the core decision making block for creating more complex combinatorial decision circuits.

4.) The AGC Had its Own Unique Display and Keyboard

To interact with the AGC, the Apollo astronauts used a display and keyboard (DSKY). The DSKY’s display used a combination of 7-segment numerical displays and indicator lights. A basic keyboard was used to enter mission programs and operations. The AGC was supported by two DKSYs: a main control panel and another located at the navigator’s station near the optical instruments. The DSKY measured 8x8x7inches and weighed 17.5 pounds.

To communicate with the AGC, the astronauts entered in mission programs and operations using verbs. For example, entering verb 78, allows the DSKY to prompt the astronaut for the azimuth information.

5.) There Is a Virtual AGC DSKY Simulator

The DSKY Virtual Simulator allows hands-on exploration of the AGC mission programs and operations used on the Apollo lunar module. The simulator was originally developed in C then converted to javascript by Ronald Burkey. Burkey explained the project’s objective was to provide a computer simulation of the AGC used onboard the Apollo lunar module. To illustrate the DSKY-AGC function, there is a Saturn 5 launch checklist to explore with the online simulator on the virtual DSKY website.

To further explore the Apollo Guidance Computer, additional information on the AGC hardware can be obtained from the NASA website. Also, the online virtual simulator for the AGC-DSKY can be found on the svtsim website.