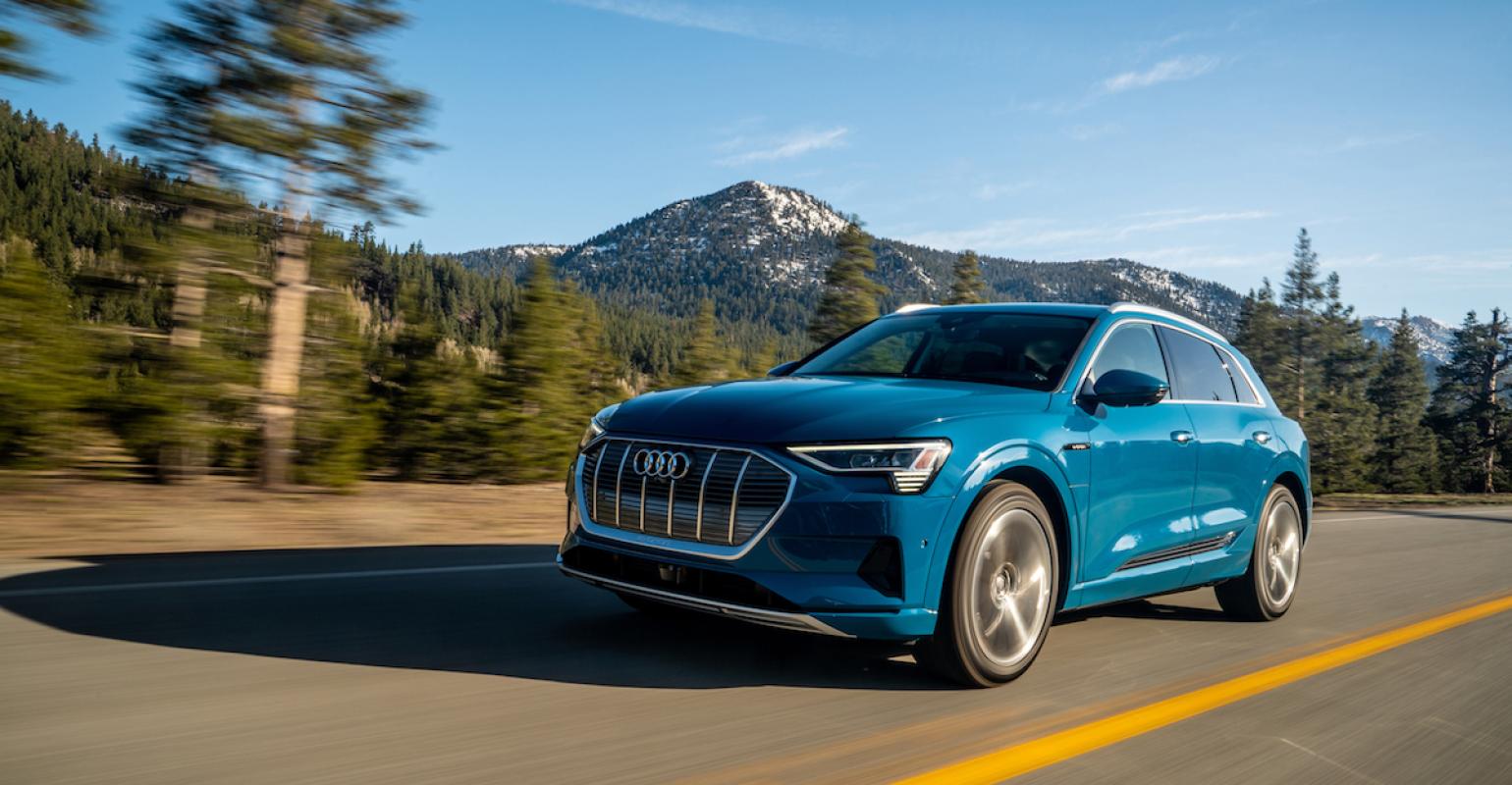 We got behind the wheel of the 2019 Audi e-tron and saw how the Electrify America DC fast-charging network provides critical infrastructure for Audi's battery-electric vehicle.

As new cars emerge, and charging infrastructure improves, one obstacle to electric vehicle adoption will be getting drivers comfortable with new routines and habits for keeping their cars energized.

To explore this further, Design News recently spent a weekend with Audi’s e-tron electric SUV and also experienced the 150-kilowatt DC fast charging available for the car on the Electrify America charging network.

The e-tron is a handsome, capable, and quick two-row, five-seat crossover SUV that provides the kind of practicality and style that is converting consumers away from sedans. This mid-size segment is the largest in the luxury car market. And our test car’s base price of $74,800 is solidly in premium car territory, but reasonable for a prestige brand like Audi, even when options run the bottom line to our car’s $86,840. Audi’s cars remain eligible for the full $7,500 federal tax credit as an offset.

It is similar in size, appearance, and price to Audi’s own Q8 crossover SUV. Its electric rivals include the homelier Tesla Model X and the smaller Jaguar I-Pace. The e-tron features a 95 kilowatt-hour lithium-ion battery pack, compared to a 100 kWh pack for the Model X and 90 kWh for the I-Pace.

The EPA says the Model X can go more than 300 miles on a charge, while the I-Pace is rated at 240 miles and the e-tron claims 204 miles. But all of these vehicles are incredibly sensitive to driving speed, ambient temperature, and other variables that can have a large effect on their actual driving range.

The (In)Convenience of Fast Charging

The e-tron’s charging port hides behind an electrically-operated panel in the driver’s side front fender, and the home charging adapter lies in the car’s front trunk. Charging at home using a 240-volt 9.6 kW Level 2 charger should bring a depleted battery up to 80 percent charge overnight. Achieving a full charge using the standard 120-volt 1.2 kW charger seems like it could take until shortly after the Sun balloons into a gas giant, as the tediously slow charging rate slows further as the battery starts to fill up.

Attempting to charge from 80 percent overnight on the 120-volt charger saw the charging rate slow to just half a mile of driving range added per hour of charging. Fortunately, we had nearby access to one of Electrify America’s 350 kW DC fast chargers. The e-tron can’t charge that fast, topping out at 150 kW, but the Porsche Taycan will be able to use the full power available for the speediest possible charges.

Electrify America says it will have 500 charging locations nationwide by the end of this year, across 42 states and 17 metro areas. Charging isn’t free, but e-tron buyers get their first 1,000 kWh for no charge, which is enough to travel about 2,000 miles. At a 50 percent state of battery charge, the Electrify America stations pour electrons into the e-tron at the rate of 365 miles of driving range per hour of charging time!

The Electrify America “pump” features a big video screen that walks the customer through the process of using it. Unlike charging systems that require membership or use of a smartphone app, the Electrify America fast charger is just like a gas pump, so you need only swipe a credit card to get energy for your car.

While it is in progress, the charger’s screen shows the current state of charge in the battery. When you’re done, it displays a summary of the energy delivered, the time spent charging, the battery’s final state of charge, and the amount charged to the credit card.

In our case, the e-tron took 42.7 kWh of juice in 18 minutes, ending at 81 percent charge at a cost of $17.03. Fast charging regularly isn’t good for an EV’s battery, and it also isn’t good for the driver’s wallet. Charging EVs at home is much cheaper than buying gas.

Paying for the convenience of fast charging is more expensive though, as that 42.7 kWh yields about 100 miles of driving range in the e-tron. That is the equivalent of $3.40 gas in a 20-mpg crossover SUV at a time when gas in my neighborhood is a dollar cheaper than that.

The lesson here is to charge at home with a Level 2 charger whenever possible and save fast charges for highway trips. Audi reports that today’s EV owners do 80 percent of their charging at home.

Also, unfortunately, the Electrify America chargers and Audi’s cars are currently in some kind of a dispute in which the software can’t reliably agree on when it is safe to release the charging plug from the car. This left me cursing them both while going through the door-unlock-plug-release-button sequence for about 10 minutes until it miraculously finally disconnected and I wasn’t left to Uber home from an abandoned car. Audi says the two companies are working together to resolve this issue as soon as possible.

A Combustion Feel in Everything but the Shifter

Driving the e-tron is similar to driving combustion-powered luxury crossovers, with opulent cabin appointments, sure-footed all-wheel drive, and muscular acceleration. The electric powertrain is rated at 355 horsepower in normal driving modes, with 402 horsepower available in Boost Mode. Boost Mode lasts a maximum of 8 seconds, but the e-tron only needs 5.5 of those seconds to reach 60 mph.

Our test car included the optional $650 towing package, which certifies the e-tron to pull a trailer weighing as much as 4,000 lbs. We’ll have to schedule another visit with the e-tron to learn what towing does to electric driving range. Driving range without a trailer, in normal around-town conditions, seemed to track right along with the EPA’s 204-mile range rating, though very hot or cold weather would be expected to take a bite out of that.

The e-tron features Audi’s innovative Traffic Light Information (TLI) system, which displays a countdown to the changes of upcoming traffic lights if they are instrumented to provide the data. The TLI system makes waiting for a light to change much more bearable, as we’re no longer waiting in ignorance of the duration.

The cabin climate control seemed underpowered, without ever blowing truly hot air in heat mode. The seat heaters were only adequate in cool fall weather, so neither inspires confidence for true winter cold conditions. Worse, there was no available heated steering wheel for our 2019 test car, but that’s an addition that could potentially arrive as early as the 2020 models.

EV makers often feel the need to distinguish their electric drive vehicles from combustion-powered ones with a unique shifter, and usually these shifters are distinctly inferior to conventional ones. The e-tron’s unusual shifter slides fore-and-aft to select Reverse or Drive, and is topped by an unmoving wrist rest for the lower of the two touchscreens mounted in the center of the dashboard. It looks odd, but works pretty well without obstructing access to that lower touchscreen. However, a conventional shifter that notches through the familiar PRNDL positions, and stays in place as an indication of the gear selected, remains more foolproof.

The e-tron, like the Electrify America charger, demonstrates the impressive current state-of-the-art in electric vehicle technology, as well as the room for continued improvement of this rapidly evolving paradigm. The driveways of upscale middle-class suburban America will be very well served by the e-tron, with less adaptation of expectations when moving from gas power than ever before.