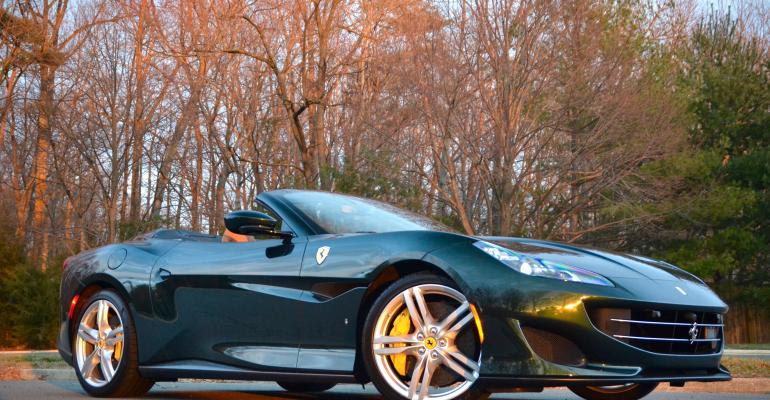 Ferrari is famous for its beautiful red sports cars, but they recently sent us a Verde Zeltwig green grand touring car that looks ready to test the thesis that everyone’s Irish on St. Patrick’s day.

Ferrari’s Portofino 2+2 hardtop convertible means to be a comfortable grand touring cruiser rather than a hard-edged, track-ready sports car like the F8 Tributo, for example.

Just look at it: the 592 hp, 561 lb. ft., 3.85-liter twin-turbocharged V8 is in the front, beneath an imposingly long hood. In the back, a couple kids or maybe another couple for a double date if the drive is short. There is more space in the back seat thanks to an extra two inches of legroom added in the development of the Portofino from the previous California T.

While the Portofino test car is a lovely green hue, buyers might see red when they notice that our test car’s $210,783 base price has options that boost the as-tested bottom line to $301,743!

The bare body-in-white employs a dozen different aluminum alloys for its various castings, extrusions and sheet metal panels, and new aluminum underbody aerodynamic trays replace plastic ones to contribute to the improved rigidity. There’s an additional extrusion that braces the chassis between the two sides of the back seat like an armrest that Ferrari says contributes to a more linear distribution of torsional forces in the car.

At the same time, the Portofino enjoys increased use of castings to consolidate many parts into fewer parts and it uses thinner 2.6 mm casting wall thickness in place of the previous 3.0 mm wall thickness to save weight.

The engine carries clever improvements over the one in the California T that boost output by 40 horsepower. But just as importantly, engineers wanted to improve the engine’s sporty responsiveness. Take a look at the new one-piece cast aluminum exhaust manifold/turbo housing. Airflow is optimized to trim the time it takes the turbocharger to reach full boost by 5 percent, and the equal-length runners optimize the exhaust pressure waves’ passage to the turbo and contribute to a more pleasing exhaust sound.

Ferrari also cleaned up the airflow, both on the intake and exhaust side of the engine to minimize pumping losses and redesigned the intercooler for improved cooling efficiency.

On the exhaust side, new electric muffler bypass valves let the exhaust change more quickly between the louder and quieter settings.

The Portofino’s unexpected agility in corners is probably attributable significantly to the electronic limited slip differential, which imperceptibly channels power to help shepherd the Portofino through curves, providing invisible assistance to the driver, who is left to feel heroic for the car’s impressive prowess.

Stand on the gas and click the paddle-shifted 7-speed dual-clutch transmission up through the gears and the Portofino rockets to 60 mph in less than 3.5 seconds and reaches a top speed stated as “more than 199 mph.” We’ll take their word for it on the top speed.

This performance underscores something that is probably not terribly surprising: the Portofino is a serious and capable sports car. Considering the prancing horse badges on its fenders, maybe that is obvious.

The engine isn’t terribly loud, but when driven at sensible cruising speeds, it is clearly out of its element and sings a flat, discordant song rather than its invigorating mechanical music at redline. Turbocharged engines with 180-degree flat crankshafts are great for racing, but they just don’t produce pleasing sounds when driven gently.

Bystanders, afraid to admit the emperor has no clothes, with say the Portofino sounds great, but unless they are in the bleachers at the racetrack when the car passes at full throttle, it just isn’t true.

It is the same for the transmission. It hammers through the gears with brutal efficiency when the Portofino is ripping down the road. But at low speeds there is not the silky grace expected from a GT car as it glides effortlessly to the valet.

Make no mistake, the Portofino is not unrefined. It is just that competitors like the Bentley Continental GT V8 convertible and the Aston Martin DB11 Volante are so sublimely effortless that the Portofino seems to be in a needless lather.

This means that the Portofino, like other Ferraris, is a superlative sports car. But its affinity is clearly for vino rather than Guinness Extra Stout. It should probably have been painted red.