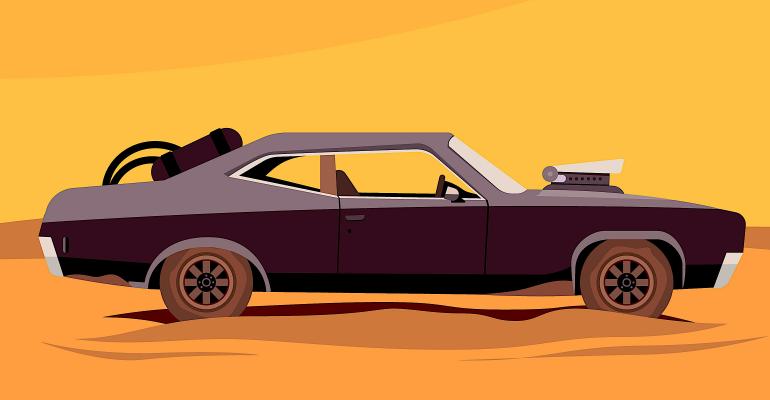 It is a fairly iconic scene in the Mad Max films: evil marauders swoop in on Max’s modified Ford Falcon XB V8 police interceptor and he pulls a handle beneath the dashboard to engage the car’s supercharger for war emergency power, as the WWII fighter pilots called it.

Those vintage warbirds employed enormous turbo-superchargers to pump up their power, much as today’s common turbocharged car engines use the flow of exhaust gas to spin an impeller that is connected via a shaft to a compressor turbine that pressurizes the intake charge in a combustion engine.

Naturally aspirated combustion engines are limited to the nominal 14.6 psi of sea level air pressure to fill their cylinders with air for each intake stroke, which restricts the air/fuel mixture volume available for combustion. Turbochargers pressurize that intake charge, packing in more air and fuel and making more power.

But exhaust-driven turbochargers take a split second to spin up to the speed needed to build pressure when the driver asks the engine to accelerate from low RPM. This is known as turbo lag.
A solution for turbo lag is to spin the compressor turbine using a belt from the crankshaft, like the alternator and air conditioning compressor use. This is supercharging. With the compressor geared directly to the engine, there is no delay in boost under acceleration.

Early supercharged cars like the Studebaker Golden Hawk and Ford Thunderbird used Paxton centrifugal superchargers, which were similar to the turbines used in turbochargers. But because they are geared to the engine, they don’t spin at the incredible speeds achieved by turbochargers, which limits their maximum boost.

An alternative design is the Roots-type supercharger, which employs interlocked twin screws to compress the air. This design has historically suffered from friction losses, but recent improvements in design thanks to computer-aided design and the application of low-friction surface coatings have reduced the frictional losses, making these superchargers attractive for high-powered sports cars.

The Chevrolet Corvette Z06 and ZR1, along with the Dodge Charger Hellcat and Challenger Hellcat, and the Ford Mustang Shelby GT500 have all used Eaton’s Twin Vortex Screw family of superchargers to bolster their output.

Compressing the air in the supercharger, even with reduced heat-making friction, still heats the air before it goes to the engine, which is undesirable for combustion. So, these cars add an air-to-water heat exchanger beneath the supercharger to cool that intake charge before it reaches the engine.

Supercharger efficiency has made huge advances, but when they are spinning at the engine's redline, compressing the maximum amount of air, the parasitic loss of the Shelby GT500's supercharger is 100 horsepower, according to Ford engineers. So the engine, which is rated at 760 net horsepower, is actually producing 860 hp at the crankshaft. Despite the losses, the boost is worthwhile. Just ask Mad Max!