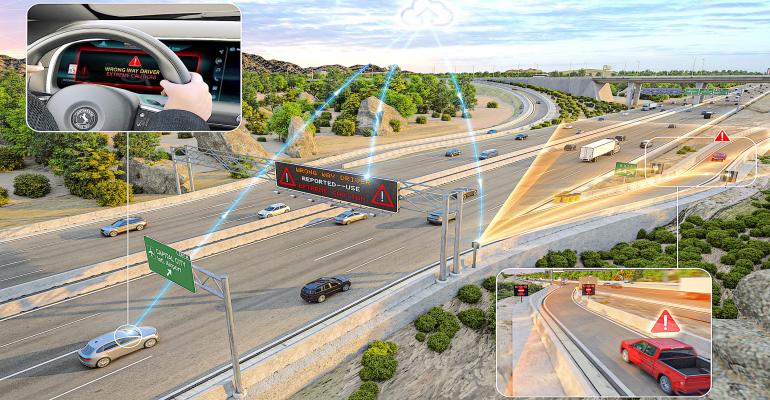 Continental engineer Jon Stone was motivated to prevent wrong-way driving collisions by a crash that struck close to home.

Each year there are approximately 295 crashes caused by drivers going the wrong direction on a divided highway, leading to an average of 389 fatalities from those crashes. Terrible as those numbers are, it was a single crash, causing six fatalities, that sparked Continental’s Head of Program Management Research and Advanced Engineering in North America, John Stone, to action to address the problem.

“In early 2019, when our team got to the CES conference in Las Vegas, I heard from my wife that family friends had been hit and killed by a wrong-way driver on their way back from vacation in Florida,” Stone wrote on the company’s blog. “Six people died – both parents, the three kids, and the wrong-way driver.”

Stone began brainstorming with his Continental colleagues that same night, contemplating ways to employ the company’s automotive-grade traffic-monitoring radar systems to provide a warning, both to the driver entering the highway going the wrong direction and to drivers they will encounter once on the road.

The system is installed into a fixed-mount infrastructure-to-everything (I2X) roadside unit, which has low enough power requirements for it to run on solar power. That means no electrical infrastructure needs to be installed. The WWD system would mount on existing poles and gantries near the beginning of highway exit ramps, detecting and alerting wrong-way drivers just entering the highway.

The detection technology uses a combination of Continental sensors, connected-vehicle systems, and a heat mapping algorithm. Once a potentially deadly wrong-way vehicle has been detected, the WWD system can send an alert to oncoming drivers via Infrastructure-to-vehicle (I2V), vehicle-to-everything (V2X), or SMS text messaging. It could even connect to navigation apps increasing the penetration and effectiveness of the alerts, according to Stone. “We also see the opportunity to integrate the software with Waze, Google Maps, and Apple Maps,” he said.

The self-learning system automatically defines the roadways and directions of travel, then sends an alert via push notification to a mobile device or connected vehicle informing at-risk vehicles of the wrong-way driver’s location, speed, and direction of travel. “A software algorithm builds up enough data to distinguish between a car that is going the right way and a car that is not,” Stone explained.

“The device sends out an alert via the cellular cloud,” he added. “We developed a mobile app and a way to automatically communicate with state department of transportation operations centers, which can dispatch police and activate the digital overhead signs you see on highways.”

As if the loss of family friends weren’t motivation enough, on the way back from a conference where he described the WWD system, Stone and his team were nearly taken out by a wrong-way driver themselves!

“As we were heading back from (Continental’s annual technology showcase in Brimley, Mich.) that night, lo and behold, a wrong-way driver was coming at us on I-75 near Gaylord,” Stone recalled. “It’s so sudden. You realize they’re in your lane and going so fast. We had to pull off to the shoulder quickly, gravel flying everywhere.”

Fortunately, the wrong-way vehicle missed Stone’s car and another car of his co-workers. “Our colleagues were about a mile back from us and, thankfully, the driver missed them, too. They called us, we called the police, and the police eventually pulled the person over. Luckily, nobody was harmed. But that was a sign to me: keep working on this.”

The question for new technologies is affordability. Stone says that Continental’s system is a bargain considering the stakes. “People are being killed senselessly,” he said. “There are ideas for preventing drunk driving, but our approach with automotive radars is a cost-effective solution to alert people who are at risk in addition to the wrong way drivers.”

Applying the cost of the system to the 58,000 exit ramps on highways in the U.S. should be a good value proposition,” said Stone. “Outfitting 58,000 locations should be pretty affordable, considering the potential to save who-knows-how-many lives.”