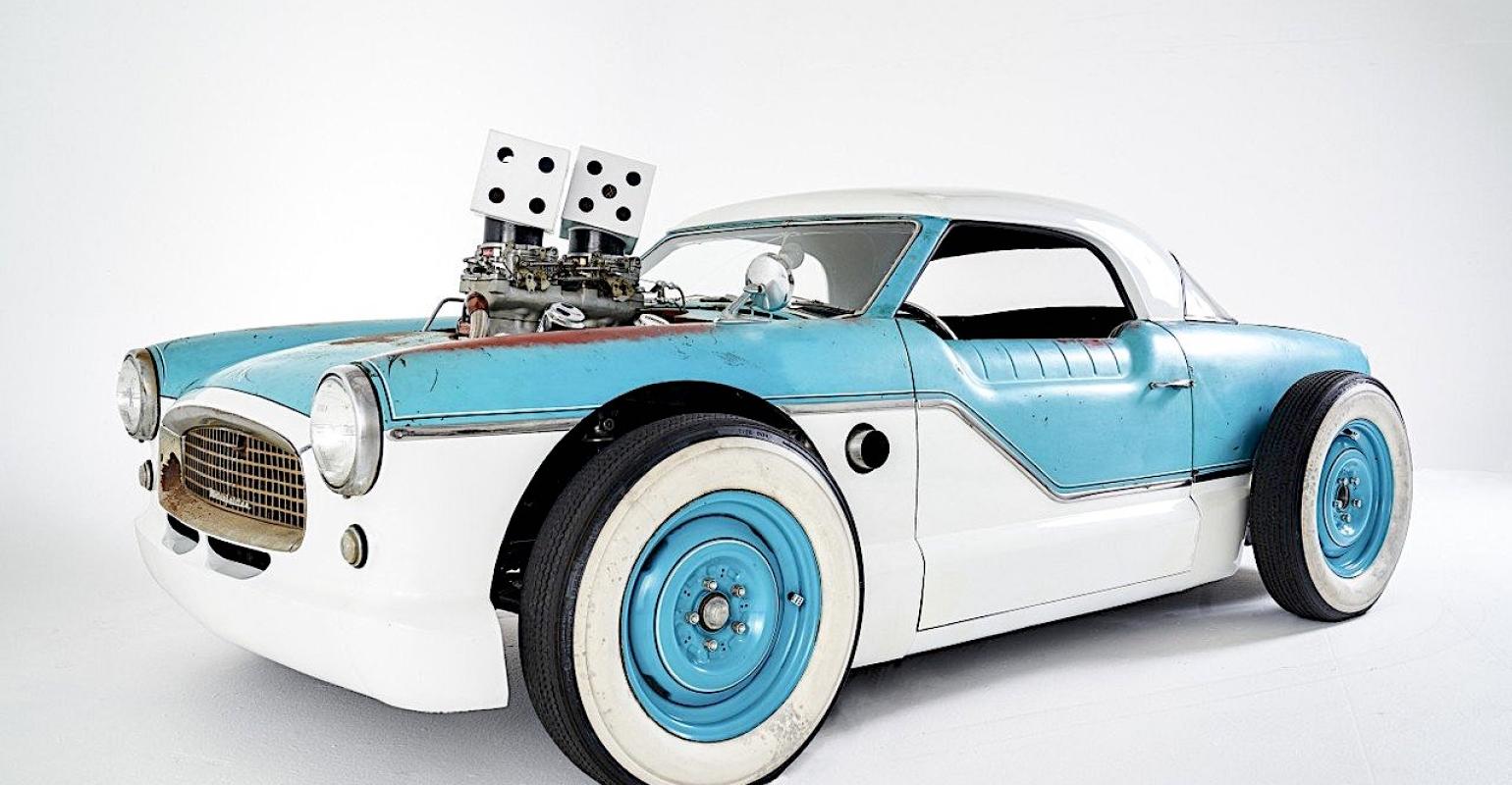 We are accustomed to engineers and designers developing production cars and trucks from prototype models, but the team at Mattel’s Hot Wheels brand has the challenge of going the other direction: from full-size to pint-size.

While Hot Wheels has always built tiny 1:64-scale die-cast replicas of production models and has also developed its own unique custom designs, starting for the brand’s 50th anniversary in 2018, Hot Wheels has picked a fan’s real-life custom car for immortalization as a Hot Wheels toy car.

This presents the new challenge of developing a model from a custom one-off vehicle, giving designers like Manson Cheung a fresh challenge compared to their regular work. The winner the first year was Luis Rodriguez’s and his “2JetZ” open-wheel jet car, while last year’s honoree was a hot-rodded Nash Metropolitan minicar built by buddies Greg Salzillo and Dave Ford. 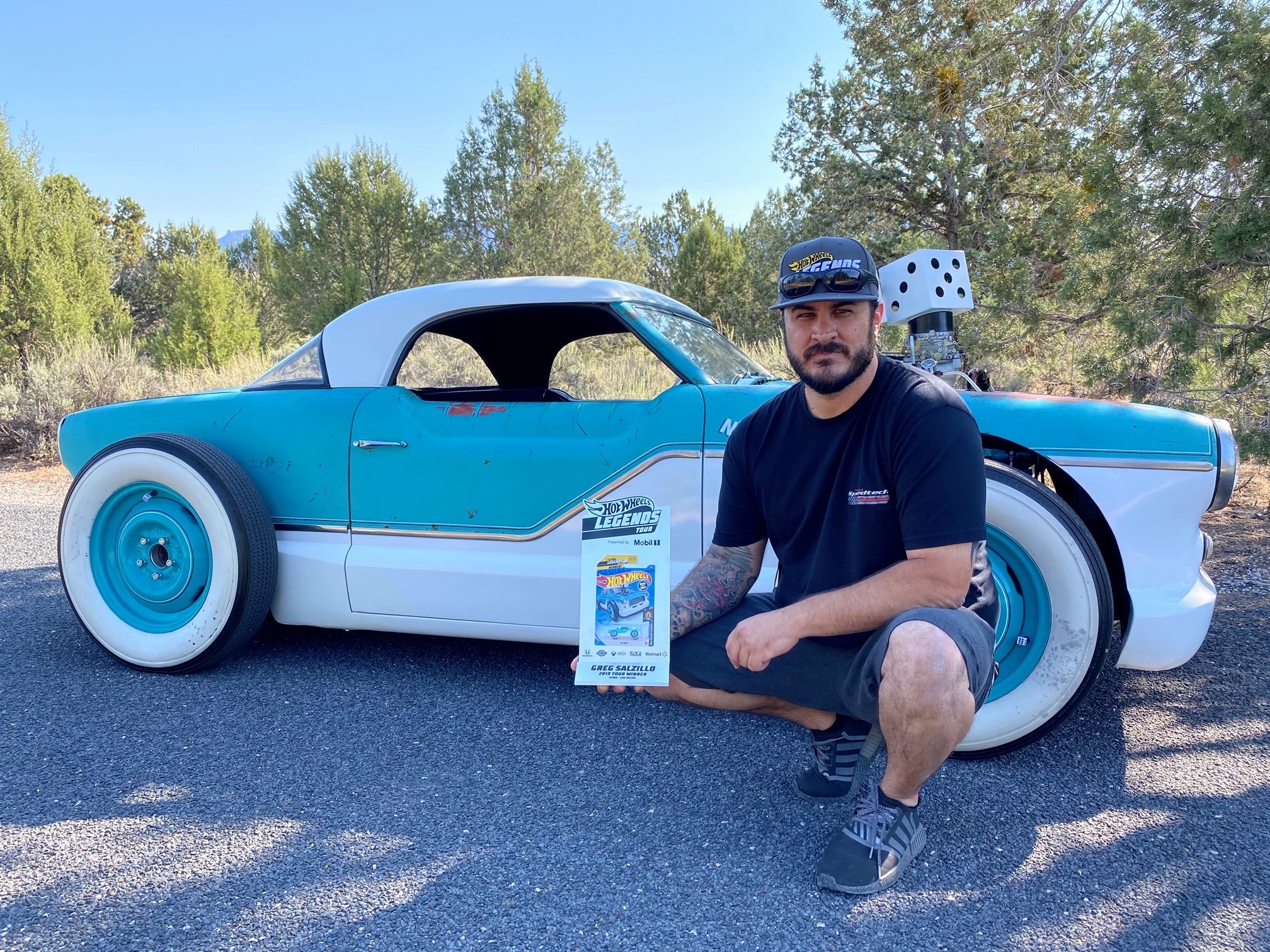 Hot Wheels Legends competition winner Greg Salzillo with his Nash Metropolitan and the model version of it.

Related: Slideshow: 3D Systems Changes What Engineers Can Do With 3D Printing

The Nash replaces the Metropolitan’s original 40-horsepower four-cylinder engine with a 300-horsepower small block Chevy V8 in traditional hot rod fashion. The 2JetZ, on the other hand, was inspired by fighter planes and is powered by a turbocharged 600-horsepower engine.

Cheung’s challenge was to capture the style and spirit of these amazing custom real-life cars and translate that into a kids’ dream machine. He comes to these projects from the appropriate point of view: Cheung not only designs many of Hot Wheels’ “entertainment” vehicles, including the Batmobile, Ghostbusters Ecto-1, the Back to the Future time-traveling DeLorean, Speed Buggy, Scooby Doo’s Mystery Machine, and the A-Team van, he also actually owns and drives a DeLorean himself!

For the Nash design, Cheung was able to locate blueprints for the original car online and used them as the starting point for his work, much as Salzillo and Ford started with a stock Metropolitan to build their custom car. He says that the first step in the process is to carve a clay model that approximates the car’s fundamental shape and to then refine it from there. Hot Wheels’ clay sculptors no longer carve clay by hand.

Instead, he uses a 3D Systems Touch X haptic feedback device to carve digital clay. The Touch X features a stylus on the end of an articulated arm, and the user grips that stylus like a pen to provide input and receive simulated feedback through its force feedback system. Surgeons use the Touch X to refine their technique and to rehearse operations, which gives an idea of the refinement of its tactile feedback.

“It is very much like sculpting by hand because you have that arm movement,” confirms Cheung. “You can feel the digital clay.” The Mattel team has a dozen sculptors using the Touch X to create next year’s toys, so while Chueng carves Hot Wheels cars, his colleagues are sculpting dolls or other kinds of toys.

It can take between 20 and 40 hours of work to create the basic shape of the car. After that, Mattel’s production process must be recognized. Each Hot Wheels car is made of four pieces; the body, the chassis, the windshield, the interior. Plus, of course, the four wheels.

Cheung then spends a similar amount of time creating these components that will combine to make the final product. It is important during this stage to keep clearance issues in mind for assembly because of the material thickness of the parts that are going together, he points out.

The original two-tone aqua-and-white Nash paint scheme provided Cheung with a unique opportunity because of its natural break line. So, he created the model’s chassis in white and had it wrap up around the bottom of the car, with the main body in the main aqua hue. 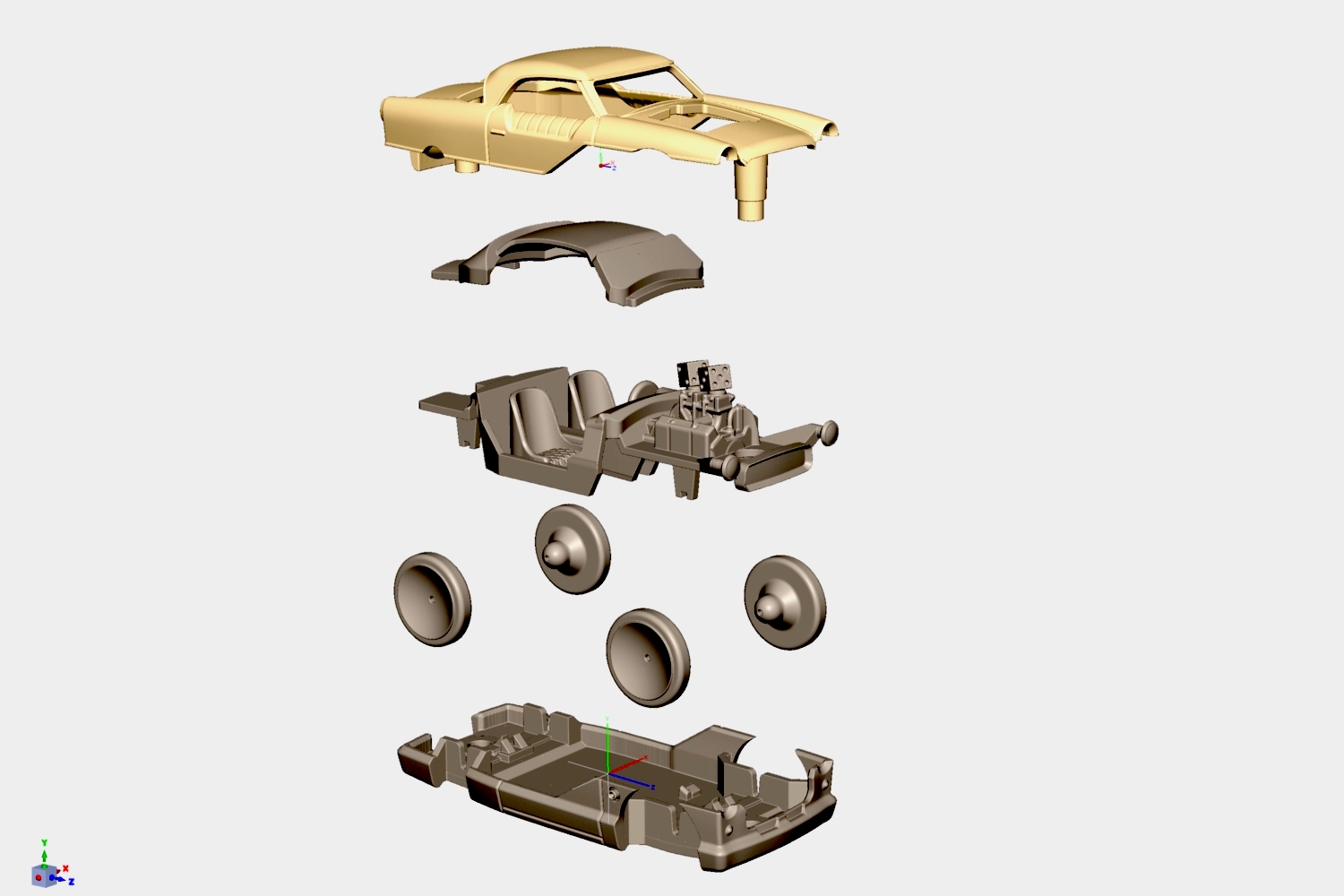 A CAD image shows the components used to create the Nash model.

There’s nothing special about the car’s windshield component, but because the engine protrudes through the hood, it is designed as part of the car’s interior component, incorporating as many details from the real car as possible.

“I tried to replicate everything in the interior,” he says. “It had heated leather seats and the back of the seats had some detail, so I tried to include that in there. Sometimes in production, we lose that, but I put that in, in case we can get it.”

A unique detail of the original car is a pair of dice atop the carburetors that serve as air filter housings. They are cocked at angles to create the impression they’ve been tossed, and Cheung says he was anxious to capture this accurately in his model.

Because the digital clay model is virtual, Mattel has a battery of ten 3D printers that sculptors can use to bring their design into the physical world. “I send them the files and specify the colors,” Cheung explains.

The variety of additive manufacturing machines include the Stratasys J750 polyjet and Formlabs stereolithography printers, which produce highly detailed parts that are ready for assembly into models.

"For the majority of requests, we’ll print using our Stratasys J750 color printer which can print more than 500,000 color combinations including Pantone colors," explains Mattel's 3D printing specialist Shane Thompson. "This process is called polyjet printing which uses 4 print heads that have 2 rows of microscopic nozzles on each head that the resin gets jetted out from," he continues. "This machine prints in layers of about .001 of an inch which gives us really good resolution and surface finish. The build frame for this machine is 19.3" x 15.4" x 7.9" so we can print many parts at once."

For maximum resolution, such as when producing models to show at trade shows, Mattel will use its Formlabs Form 2 stereolithography apparatus (SLA) machine. "This machine can only print in one color," reports Thompson. "This machine prints in layers of about .012 of an inch which gives great resolution/surface finish. The build frame for this machine is 5.7x5.7x6.9 so quite a bit smaller than the J750 printer. It is used for parts that have intricate detail," he concludes.

A challenge for the graphics department was replicating the Nash’s patinaed paint with the rust soaking through the car’s thinning original finish. Then it was time to mount the wheels. The Nash’s unorthodox exposed wheels are quite different from Hot Wheels' usual style, but fortunately, the company has an alternate wheel that Cheung could use. “Luckily we had special wheels called ‘skinny wheels’ that worked perfectly for the Nash,” he recalls. “They look like large bike tires. We had those wheels that fit perfectly.”

With the car finished, the prototype goes to Mattel’s production engineers. However, production realities are not always compatible with design, and that proved to be the case with the rolling dice atop the Nash’s small block engine.

“We sent it off to our Asian counterparts to deal with production,” he continues. “Sometimes they use thicker or thinner material. There were some slight changes. Some engine detail was lost because of those production issues.” The cockeyed dice were one such casualty. “That was lost because of tooling issues.”

In total, the Nash project went faster than a usual design, in part because of the split between the colors simplifying some of the work. “It only took me about 40 hours, which is a lot faster than I thought,” he says. “Normally it would take me 50-80 hours.”

Cheung has done that for more than 700 different Hot Wheels designs since 2006. That seems like a lot, but the company has created more than 20,000 different models since 1968 with a total production of 7 billion cars. This number will likely not surprise any parents who believe that 7 billion of the cars litter the floors of their homes, but indeed that total is shared among all families worldwide.

Cheung says that he hopes to be assigned to do the next real-car-to-toy conversion project. In the meantime, he can spend time in his own hot wheels, his DeLorean DMC12, which he has customized lightly with a fresh engine and transmission and lowered suspension. 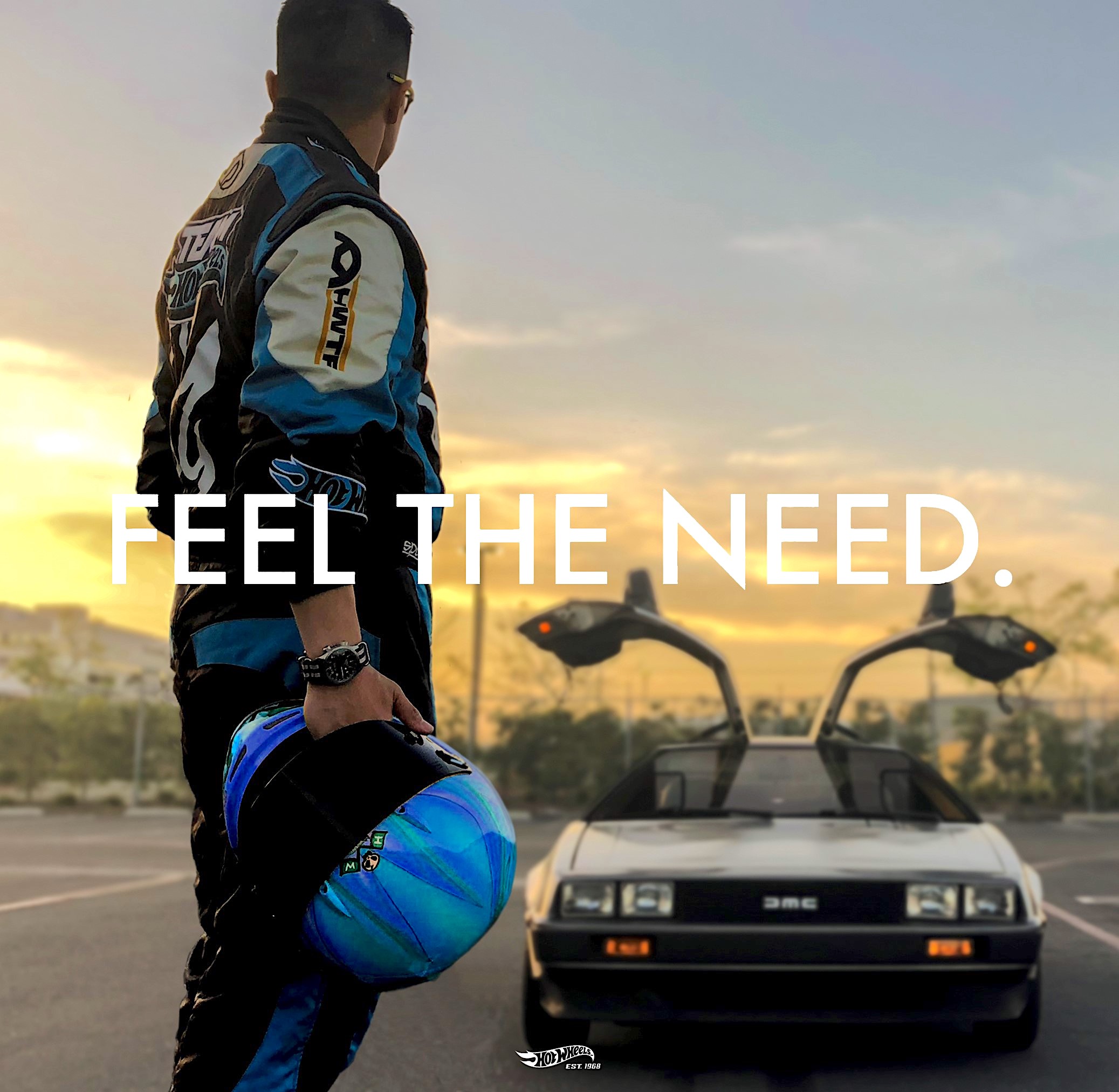