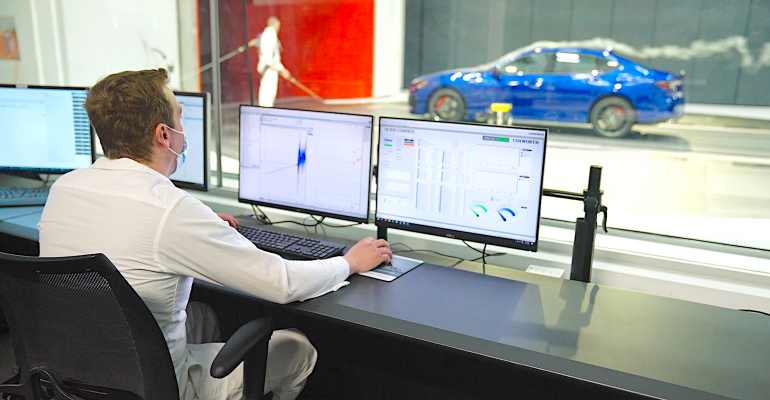 Honda has opened a $124 million wind tunnel that it says is the world’s most advanced facility near the company’s Ohio research and development headquarters.

Dubbed the Honda Automotive Laboratories of Ohio (HALO) facility, the tunnel is built on the grounds of the Transportation Research Center Inc. (TRC) in Central Ohio. The tunnel’s claim to the “most advanced” title rests with its ability to conduct three distinctly different kinds of testing, aerodynamics, aeroacoustics, and racing, in one location.

Until now, Honda’s engineers have had to travel extensively to third-party wind tunnels around the world, so having this facility close to home will be a huge operational advantage for the company. In fact, Honda has plans to be able to isolate other users from its own employees, running the tunnel with an independent staff when needed, so that HALO can even be used by competitors.

“Locating this new wind tunnel near our automobile development center here in Ohio will not only relieve much of the development complexity associated with travel to third-party wind tunnels around the world, it will create greater opportunities for collaboration among our product development and racing engineers,” remarked Jim Keller, executive vice president of Honda Development & Manufacturing of America, during a videoconference round table with journalists.

HALO’s 12-bladed carbon fiber main fan is 8 meters in diameter and consumes 5 megawatts at full power, when it is spinning 250 rpm. The tunnel features a unique variable nozzle, which opens to 25 square meters for production vehicle testing at speeds as high as 250 kph (155 mph) or it can choke down to 18 square meters to blast air at race cars at 310 kph (192 mph).

The variable nozzle, combined with alternate rolling road belts for different kinds of vehicles and an aeroacoustic microphone array, combine to give HALO three distinct capabilities, according to wind tunnel lead Mike Unger.

The rolling road belt systems are either a five-belt system that places a belt under each wheel and another belt running under the belly of the car and a wide-belt system that runs under the entire vehicle, with all four wheels rolling on it. “The boundary layer between the stationary floor is used to simulate airflow in the real world,” Under explained. “We have the ability to swap out these two modules, depending on what vehicle we’re testing at the time. Both of these modules sit on a very precise set of scales that can measure 11.3 kilonewtons per corner with resolution as low as 2.5 newtons of force.”

As the age of electric vechicles dawns, wind noise has risen to new prominence in customers’ perceptions of vehicle comfort and quality. Honda aims to target wind noise sources in the HALO facility to ensure customer satisfaction.

“Wind noise is very important to customers now, but as we move to battery electric vehicles in the future, with the absence of the engine and the exhaust, it becomes even more important,” Unger noted. “The acoustic test system here is made up of 502 external microphones and 54 microphones inside the vehicle.”

This set-up is a critical time-saver for Honda engineers working to hush airflow over their cars. “With this system, what used to take a half a day, we can now do in about one hour,” Under boasted. “In addition to the acoustic array, the tunnel is lined with extensive acoustic treatments, ranging from half-meter-thick acoustic panels, special fabrics, and screens. If you are standing outside the flow field at 140 kph, the sound levels inside the cell is less than 57 decibels. Basically, the same sound level you’d experience in your living room when you are carrying on a conversation.”

As with the rolling road modules, the aeroacoustic module is designed for rapid deployment to maximize the tunnel’s availability. “For efficiency, we designed the system so we can switch between aerodynamic mode and acoustic mode as quickly as possible,” said Unger. “This system can be changed out in about 30 minutes.”

Racing has its own demands of a wind tunnel, and those differ enough from the requirements of production car testing that it is difficult for one tunnel to be good for both purposes. Along with the variable nozzle, HALO overcomes this with other technology. “We have designed the tunnel to make the switch from road cars to race cars fast and efficient,” Unger explained.

It is the racing focus on downforce that makes the wide-belt system necessary. “For most road cars the focus is on drag, whereas for an Indy car or an Acura DPI machine the focus is not only reducing drag but also maximizing downforce,” he said.

“For racing, the ratio of drag to lift is known as aerodynamic efficiency, one of the primary focuses of development here at the wind tunnel. The majority of the downforce in a race machine comes from the undertray, which, with our unique wide-belt system, is specifically suited exactly for this capability.”

HALO has other technical details that contribute to both the tunnel’s capabilities and to its efficient operation. Consider the need for engineers to know the frontal area of vehicles being tested in the tunnel. HALO has a system of cameras and lasers to provide that information quickly.  “We can measure the frontal area as well as the side area of the car,” reported Unger. “This all feeds into the calculation, which allows us to get the very precise information we need when we are testing in the tunnel.

Not all aerodynamic testing is done with the vehicle pointed straight into the wind, so HALO is equipped with a 180-degree turntable. “This allows us to test at various, and sometimes extreme, yaw angles,” he said. “As well, it allows us to load and unload the car as quickly and as efficiently as possible.” Honda’s engineers are always looking at keeping the operation efficient!

HALO has a giant robot arm that reaches down from the ceiling to take measurements from anywhere inside the tunnel’s test section. The 80-ton arm carries a probe on its tip to measure pressure, velocity, sound or other conditions. “The purpose of this tool is to allow the test engineer to look into detailed phenomena to understand exactly what is going on with the flow field,” stated Unger.

Anyone who remembers Boyle’s Law and its description of the relationship between temperature, pressure, and volume of a gas will recognize the necessity of HALO’s heat exchanger, which preserves a consistent temperature in the tunnel for testing. It is also important to test vehicles are different temperatures, to understand the effect that has on their performance.

“We have the capability of changing the temperature between 10 degrees C and 50 degrees C,” he said. “The reason we do this is that cars are made of various materials, steel, aluminum, carbon fiber, plastic, rubber, and so forth. These all expand and contract at different rates. All of these things impact aeroacoustics and aerodynamics. With this capability we have the ability to understand that much more closely than in the past.”

Race cars’ sensitivity to underbody ground effect means that Honda engineers need to be able to test cars at various heights to understand the effect of raising or lowering the car. Having a ride height system built into HALO lets engineers change those settings and test the results quickly. “This allows us to not only change the suspension very quickly and precisely from inside the control room, but it also allows us to study the varying ride height as it relates to aerodynamics,” Unger noted.

The total impact of this tunnel’s availability to Honda engineers should be significant, as it provides the company’s R&D engineers convenient access to a world-class development facility. And the tunnel’s excess capacity means that HALO can provide an opportunity for Honda engineers to build relationships with other companies interested in aerodynamic and aeroacoustic research.