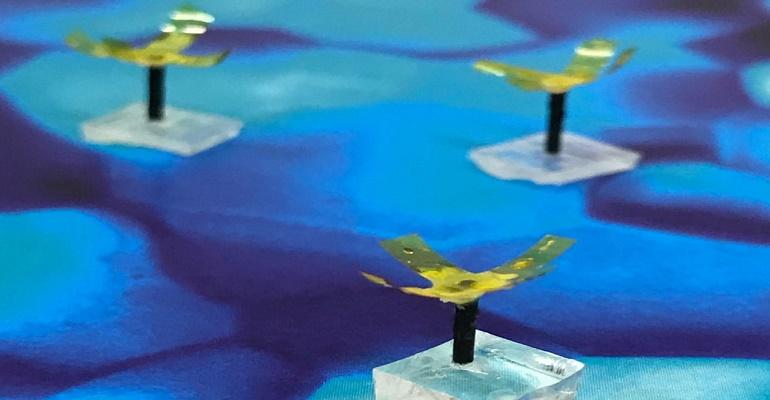 Researchers at Eindhoven University of Technology have developed a tiny plastic robot, made of responsive polymers, that can move under the influence of light and magnetism.
Tiny polymer-based robot moves in reaction to stimuli and also could have medical applications to move cells.

What if an army of tiny robots could be used to purify the ocean and other bodies of water? That’s the potential for a tiny polymer-based robot that can swim underwater developed by researchers at Eindhoven University of Technology in The Netherlands.

The tiny robot, which is made of responsive polymers, can move autonomously using light and magnetic stimuli. Researchers envision the wireless robot, which can move through water, can be used to attract and capture contaminants in aquatic environments.

Another proposed use for the robot—developed by Marina Pilz Da Cunha, a doctoral candidate at the university—could be medical. The device could be used to transport cells within a human body, she said.

Pilz Da Cunha was inspired by a small tentacled creature called the coral polyp, one of many that comprise corals in the ocean, particularly by its movement and “ability to interact with the environment through self-made currents,” she said in a press statement. Polyps have a steam that makes a specific movement to create a current to attract food particles, which the tentacles of the creature grab as they float by.

Using this as a model, Pilz Da Cunha and her team developed a wireless artificial version of the polyp which is 1 centimeter by 1 centimeter. The stem of the robot moves in reaction to magnetism, while the tentacles respond to light.

Creating autonomous robots, the movements of which are controlled by external stimuli, has been done before. However, using two different types of stimuli in one device was a complex challenge, she said.

“Combining two different stimuli is rare since it requires delicate material preparation and assembly, but it is interesting for creating untethered robots because it allows for complex shape changes and tasks to be performed," Pilz Da Cunha explained in a press statement.

Adding to the complexity is that not only do the tentacles respond to light, but they respond differently depending on what kind of light, Pilz Da Cunha explained. Under the influence of UV light, for example, the tentacles “grab,” while under blue light they make a “releasing” movement, she said.

The robot’s aquatic capabilities also are new, as the device was recently updated from a land-based version. This is what paves the way for the new aforementioned applications in aquatic and medical scenarios.

The latest version of the device uses a photomechanical polymer material that moves under the influence of light only, which gives the robot its aquatic capabilities, she said. The new material also has other advantages, such as an ability to hold its deformation after being light-activated and then returning to its original shape after light is removed, researchers said.

This material property allows for better control of the robot’s movements, particularly that of the gripper arm so robots can hold on to particles—such as contaminants or cells—and release them only when it’s time to do so, Pilz Da Cunha said.

The next step is to design an array of artificial polyps that can work together to transport particles with the capability of passing them from one to the next, Pilz Da Cunha said. She also aims to create a swimming robot for medical applications by varying the wavelengths of light to which the material responds, making it safe for human use.

"UV light affects cells and the depth of penetration in the human body is limited,” Pilz Da Cunha said in a press statement. “In addition, UV light might damage the robot itself, making it less durable. Therefore we want to create a robot that doesn’t need UV light as a stimuli.”