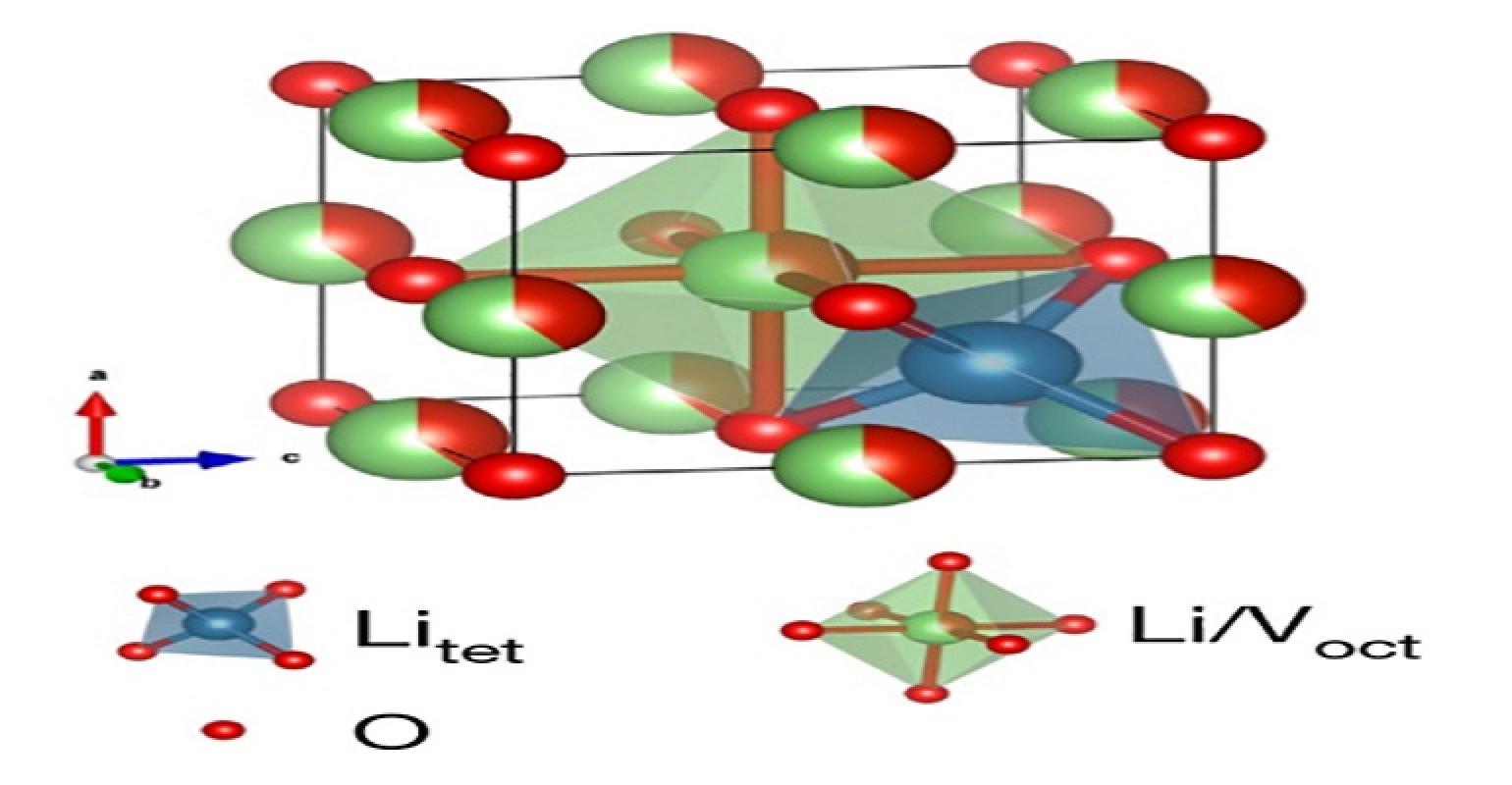 The crystal structure of disordered rock salt, or Li3V2O5, which researchers have used to develop an anode for a fast-charging, energy-dense battery. The red balls represent O, the blue tetrahedron represents Li in tetrahedral sites, and the green octahedron represents the Li/V shared octahedral sites.
Researchers at UC San Diego may have found a solution that enables lithium-ion batteries to be safely recharged within minutes for thousands of cycles.

Quick battery recharge is something scientists are constantly working on as people get more and more dependent on their electronic devices. Now researchers at UC San Diego may have found a solution in a new anode material that enables lithium-ion batteries to be safely recharged within minutes for thousands of cycles.

The material is a disordered rock salt, which is comprised of earth-abundant lithium, vanadium, and oxygen atoms—arranged in a similar way as ordinary kitchen table salt, but at the same time, randomly.

The team—comprised of scientists in the labs of Professors Ping Liu and Shyue Ping Ong—believes the anode could be promising for lithium-ion batteries that can be used for commercial applications in which high energy-density and high power must come together safely. These include electric vehicles, vacuum cleaners, or drills.

Currently, anodes in lithium-ion batteries are made from graphite or lithium titanate. The former has high energy density, yet can’t be recharged quickly for fear of fire or explosions due to material degradation. The latter is safer and can be recharged rapidly, but is not energy-dense, thus requires frequent battery recharging.

Best of Both Worlds

The disordered rocksalt, or Li3V2O5, with which the UC San Diego researchers worked meets those materials in the middle, said Haodong Liu, a postdoctoral scholar in Professor Ping Liu’s lab. It is safer than graphite but allows for much more energy density than lithium titanate—about 71 percent, he said.

“The capacity and energy will be a little bit lower than graphite, but it’s faster, safer, and has a longer life,” Liu said in a press statement. “It has a much lower voltage and, therefore, much-improved energy density over current commercialized fast charging lithium-titanate anodes.”

Because of this combination of characteristics, the material can be used to make “fast-charging, safe batteries with long life, without sacrificing too much energy density,” he said.

The team first began experimenting with disordered rocksalt in batteries six years ago, but as a cathode and not an anode. Having done a significant amount of work in that area, researchers decided to turn their attention to using it as an anode.

“When people use it as a cathode they have to discharge the material to 1.5 volts,” Liu explained. “But when we looked at the structure of the cathode material at 1.5 volts, we thought this material has a special structure that may be able to host more lithium ions—that means it can go to even lower voltage to work as an anode.”

The anode developed by the team could reversibly cycle two lithium ions at an average voltage of 0.6 V, which is higher than the 0.1 V of graphite. At this performance level, it eliminates lithium metal plating at a high charge rate, making the battery safer.

However, this rate also is lower than the 1.5 V, which is the cycling rate at which lithium-titanate intercalates lithium. This means the anode can store much more energy.

In tests, the anode cycled more than 6,000 times with little capacity decay and can recharge to more than 40 percent of its capacity in 20 seconds.

Researchers published a paper on their work in the journal Nature.

The researchers formed a company called Tyfast to commercialize the technology; the first products in which it will be used will be electric buses and power tools. The team also plans to continue developing the anode while also working on other battery components to develop a commercially viable full cell.

To that end, researchers came to an understanding of why the disordered rocksalt-based anode performs as well as it does. The reason is that lithium ions in the material rearrange themselves in a way that results in both low voltage as well as fast lithium diffusion.

In future work, the team plans to seek other electrode materials that can operate in a similar way to develop other energy-storage devices.