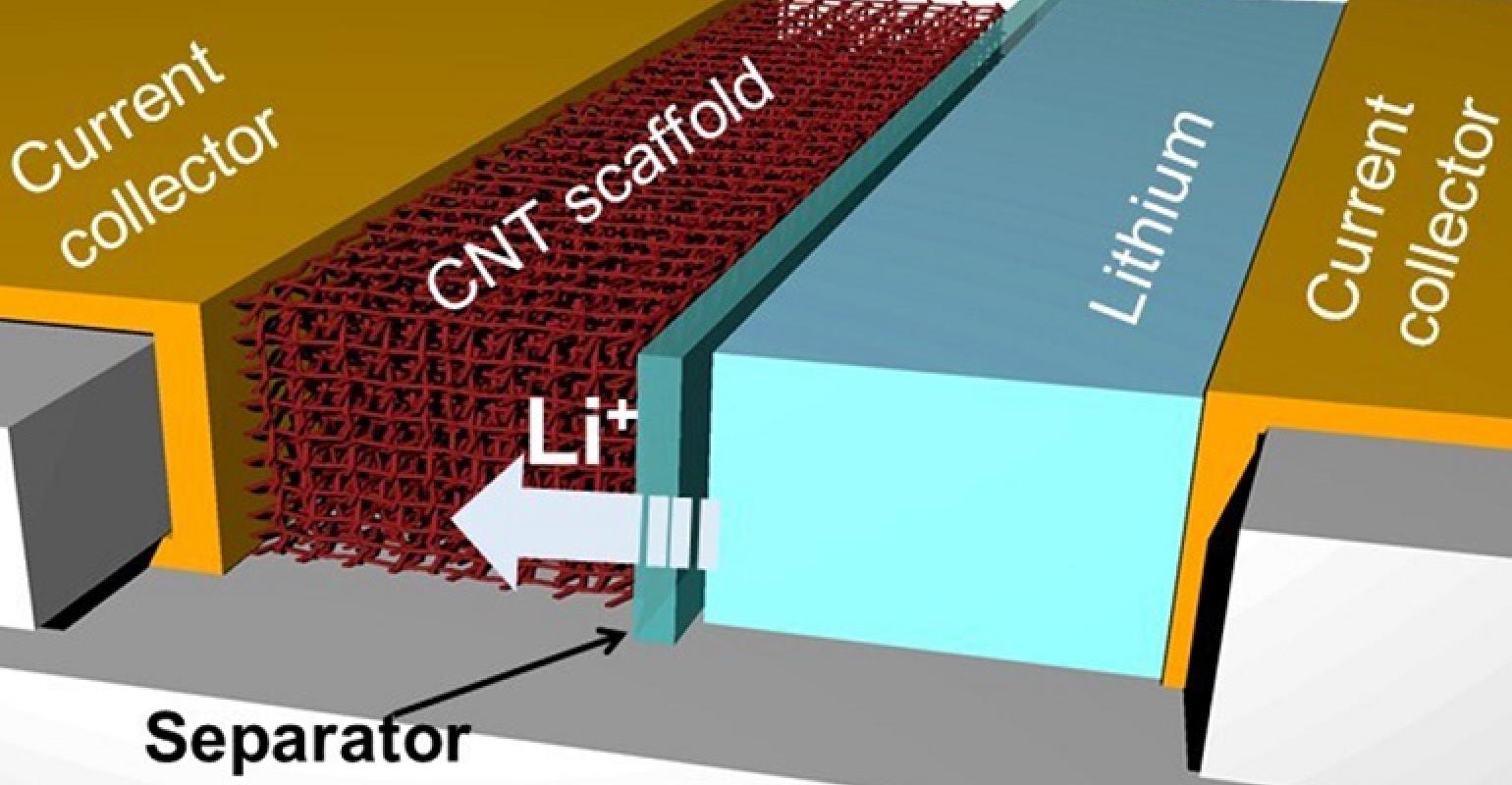 A schematic showing a lithium battery with a new carbon nanotube architecture for the anode. The battery was designed by researchers at Texas A&M University, who said it is safer and can charge faster than current devices.
Current lithium-ion battery designs pose well-documented limitations and challenges so researchers are looking for ways to improve these energy-storage devices.

The limitations and challenges of current lithium-ion battery designs are well-documented, which is why researchers have been seeking myriad ways to improve these widely used energy-storage devices.

One of the latest of these is from Texas A&M University, which has invented a new anode for batteries that researchers said solves two key problems with current batteries—their tendency to overheat and potentially catch fire, and the considerable time it takes them to charge.

Researchers used a material called a carbon nanotube to replace the typically used graphite for the anode of the battery, which they said allows for safer storage of more lithium ions in the compartment, which acts as an electrical conductor, said Juran Noh, a material sciences graduate student in the lab of Professor Choongho Yu of the university’s Department of Mechanical Engineering.

“This new architecture prevents lithium from accumulating outside the anode, which over time can cause unintended contact between the contents of the battery's two compartments, which is one of the major causes of device explosions,” she said in a press statement.

It also makes the process to pull ions from the anode to the cathode more efficient, allowing the battery to produce the “large and sustained currents needed to quickly charge devices,” Noh said.

When lithium batteries are in use, charged particles move between the battery’s anode and cathode, moving from one side to the other. At the same time, lithium ions travel in the other direction. Both electrons and lithium ions return to their original compartments when the battery charges.

Key to the design of the anode Noh’s team designed is carbon nanotubes, which are lightweight and, more importantly, contain spaces or pores for lithium ions to enter and deposit.

This avoids some current issues with the use of graphite in the battery anode, which can limit the flow of lithium ions because of the layered design used with the material in batteries, researchers said. It’s this situation that can cause battery failure and the slow charging effect.

Carbon nanotubes themselves don’t bind to lithium ions favorably, however. To remedy this, Noh and her team created anodes with alternative versions of the material that have a different surface chemistry, she said. One of those anodes included an abundance of molecular groups that can bind to lithium ions, and another had the same molecules but in less abundance, she said.

Researchers then built batteries using these anodes to test their tendency to form dendrites, which are needle-like structures that grow between the cathode and anode of batteries that can cause them to fail and catch fire.

In tests, the anodes that used an abundance of binding molecules also formed a significant number of dendrites, which did not solve the problem as researchers wished.

However, the team did find success with the carbon nanotube anodes that had a smaller quantity of the binding molecules, Noh reported. These prevented the formation of dendrites, as well as enabled a large number of lithium ions to bind and spread along the scaffold’s surface. This latter effect bolstered the battery’s ability to produce large, sustained currents, she said.

“When we had just the right amount of these binding molecules, we could ‘unzip’ the carbon nanotube scaffolds at just certain places, allowing lithium ions to come through and bind on to the entire surface of the scaffolds rather than accumulate on the outer surface of the anode and form dendrites,” Noh said in a press statement.

The research could be particularly well-suited to the design of large-scale batteries, such as those used in electric vehicles, that require quick charging, Noh added.