HomeMaterialsWearable Patch Can Regulate Body Temperature
Recent
Materials
Novel 3D Printing Method Used to Replenish Coral Reefs
May 16, 2022
Volkswagen’s Electric Successor to the International Scout 4x4
May 16, 2022
The Music Is Over For Apple's iPod
May 16, 2022
Q&A With IndyCar Gearbox Expert Anna Chatten
May 13, 2022
POLL
Intel Unveils Trust Authority to Boost Security
May 13, 2022
Supplier News Looks at Highly Customizable Industrial Monitors
May 12, 2022
Here Technologies Maps are Key to Mercedes Level 3 Automation
May 12, 2022
'We Built the Domino's Pizza Tracker for Manufacturing'
May 12, 2022 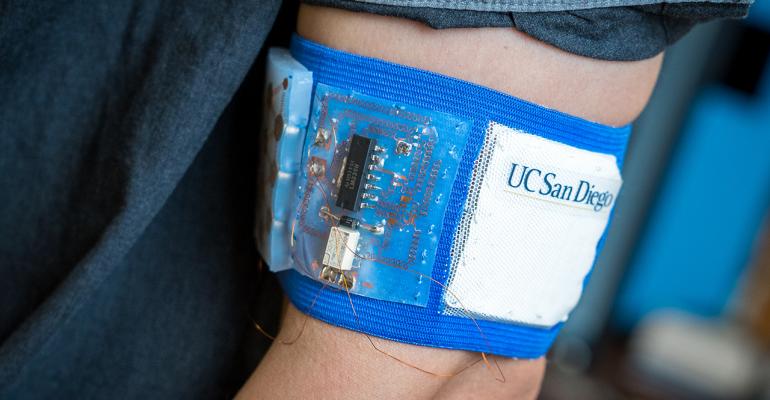 A new flexible patch developed by researchers at UC San Diego can regulate a person’s body temperature to save energy in the home of for the design of smart clothing.

Wearable technology already helps people keep track of their fitness goals and vital signs. Now researchers have created a device that paves the way for clothing that can help people regulate their own body temperature despite the air outside or around them.

A team from the University of California San Diego has developed a soft, flexible, wearable patch that can provide a personalized heating or cooling system for people whether they’re at home, at work, or on the go, researchers said.

Renkun Chen, a professor of mechanical and aerospace engineering at UC San Diego who led the research, said the team was inspired by their own personal experience but that the patch has specialized medical uses as well.

“Often time we are feeling too cold or too hot even in an air conditioned space, because different people have different thermal comfort zones,” he told Design News. “Beyond thermal comfort, there are also a lot of clinical and occupational needs for personalized thermal regulation—for example, for people with Multiple Sclerosis, outdoor athletes, fire rescuers, and so on. We believe this type of devices would help these people tremendously.”

Researchers designed the patch—which they tested by embedding it in a wearable armband—using thermoelectric alloys, or materials that use electricity to create a temperature difference and vice versa. In this case, researchers used bismuth telluride alloys, designing the patch with these as well as with a rubber material called Ecoflex and aluminum nitride powder, a material with high thermal conductivity, they said.

The team soldered these materials to thin copper electrode strips and sandwiched these materials between stretchy elastomer sheets, enabling the device to physically cool or heat the skin to a wearer’s desired temperature.

“The device uses the so-called ‘thermoelectric effect’ that uses electricity to pump the heat from one side to the other,” Chen explained. “This phenomenon is well known and widely used, for examples, for cooling of laser diodes. However, it is traditionally very rigid and needs a bulky heat sink, such as a fan or a water pack, so it is not quite suitable for wearable applications.”

Flexible and Not Bulky

To adapt the method for the patch—which is about 5 by 5 centimeters in size and uses up to 0.2 watts worth of power—researchers created a device that is flexible and didn’t need to use these “bulky” heat sinks for cooling, he said.

The patch uses an electric current to move heat from one elastomer sheet to the other, driving heat along with it, researchers explained. This causes one side of the patch to heat up and the other to cool down.

“To do cooling, we have the current pump heat from the skin side to the layer facing outside,” Chen explained. “To do heating, we just reverse the current so heat pumps in the other direction.”

For power, the patch uses a flexible battery pack comprised of a coin-cell array connected by spring-shaped copper wires and embedded in a stretchable material. The system also includes a stretchable circuit board. Researchers published a paper on their work in the journal Science Advances.

Researchers said aside from just making them more comfortable, the device also could help people save energy by making them use less air conditioning in summer or heat in the winter, Chen said. Indeed, the ultimate goal is to use the technology integrated into smart clothing to help control a person’s personal body temperature.

Now that the team has produced a working device, they plan to continue their work to develop different prototypes “with various sizes and other functionalities to meet different applications” on the way to commercialization, he added.