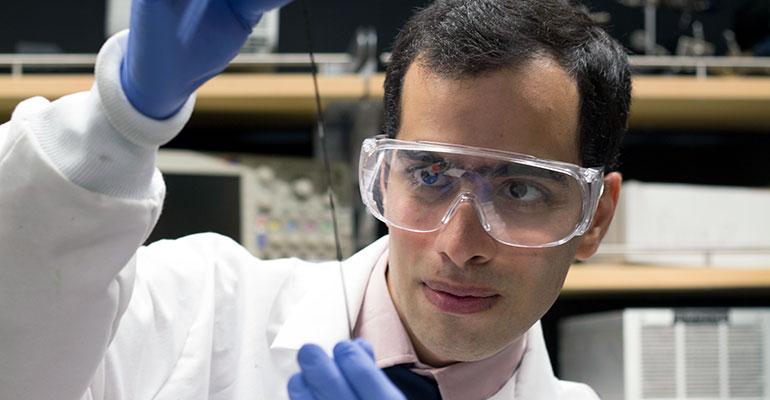 A tiny sensor developed by researchers at the University of British Columbia can be woven into textiles for next-generation wearables such as athletic clothing.

Researchers have been making significant progress in the development of electronics that can be integrated seamlessly into fabrics to facilitate more user-friendly wearable technology.

Researchers at the University of British Columbia (UBC) Okanagan are some of the latest to advance this endeavor with the design of a microscopic sensor that can be interlaced into textiles and composite materials for smart clothing that can monitor human movement.

Wearable technology already exists in the form of devices like the FitBit and other fitness-monitoring devices that can help people keep track of various aspects of their daily routine and overall health and fitness.

However, in the future researchers envision clothing with technology directly integrated that can achieve similar results as well as perform other functions, without the need for wires, batteries, or other cumbersome features. To achieve these goals, they have already begun to create flexible electronics that perform at a high level and have already interwoven in the material used to create these wearables.

“Microscopic sensors are changing the way we monitor machines and humans,” said UBC Okanagan Engineering Professor Mina Hoorfar, lead researcher at the university’s Advanced Thermo-Fluidic Lab. “Combining the shrinking of technology along with improved accuracy, the future is very bright in this area.”

The embedded microscopic sensor developed by her team uses piezo-resistivity to monitor motion when woven yarns stretch under material strain. In this case, the yarns are treated with graphene nanoplatelets through a dip-coating process, which gives them the ability to sense and monitor body activity such as heart rate and temperature, Hoorfar said.

Researchers envision the yarn sensor woven into spandex material and wrapped in silicone to protect its conductive layer so as to optimize performance and create durability, researchers said. It also would allow for the sensor to withstand repeated washings that athletic clothing typically undergoes, they said. The team published a paper on their research in the nanotechnology journal Small.

In addition to its obvious use in next-generation athletic clothing, Hoorfar said the sensor could have other applications. It also could be used in industries such as automotive, aerospace, and marine manufacturing to monitor deformations in fiber-reinforced composite fabrics.

Researchers aim to continue their work to improve the sensor’s accuracy by optimizing its material blend and improving its electrical conductivity and sensitivity, researchers said.