Stretchy Silver Nanowires Key to Next Generation of Flexible Devices 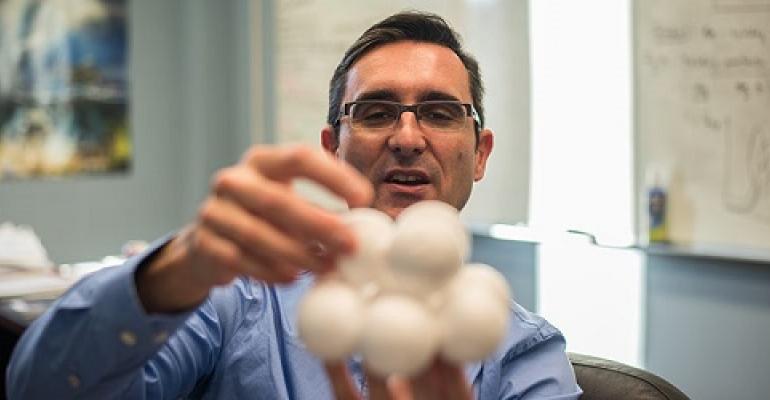 A new use of silver at the nanoscale could be the key to developing stretchable electronics such as smartphones, tablets, and other electronic devices.

Researchers at the University of Vermont have discovered that working with silver at the nanoscale allows them to create nanowires that have significant strength and the ability to stretch.

Frederic Sansoz, a professor of mechanical engineering at the university, said he and his research team have been working with gold nanowires for several years, when they became interested in working with other metals with a similar structure and mechanical behavior to expand their work.

When the team focused on silver, they realized that nanowires made from this material reacted differently than those made of platinum, another metal with which they were experimenting. “Silver nanowires were superplastic without breaking, while platinum nanowires were quasi-brittle during elongation at room temperature,” he told Design News in an interview.

Researchers realized that silver nanowires had a number of benefits in addition to their noted flexibility, Sansoz said. They had both thermal and electrical conductive properties, allowing them to be used as conductive electrode materials, he said. They also showed other characteristics that made them suitable for the next generation of flexible electronics.

“Their tensile strength during deformation is extremely high, too, more than 50 times higher than that of their bulk counterpart, because of the classic ‘smaller is stronger’ trend,” Sansoz said. “Furthermore, silver nanowire network films have proved to be transparent and very flexible, which is of particular interest for new flexible, stretchable, and organic electronics applications.”

Indeed, this kind of silver wire could be fashioned into a mesh that conducts current, allows light to shine through, and can bend extremely easily, making it well-suited as the material for electrodes in next-generation electronics, he said.

Researchers published a paper about their work in the journal Nature Materials. In the article, they show also that silver nanowires can have self-healing capability through a coupling mechanism between crystal slip and surface diffusion that can heal surface defects created by deformation, he said. “This self-healing mechanism is totally new and unique to silver nanowires in the 10-nanometer to 50-nanometer diameter range,” Sansoz said.

With silver-nanowire synthesis already well-established, a number of companies already are selling them online in bulk amount, he added, making their use in commercial applications an imminent reality.

“The touchscreen display industry has already picked up these materials for the next-generation flexible displays, such as e-paper, and large-area touchscreens up to 85 inches in size,” Sansoz said. “There are also new promising industrial applications enabled by this technology for flexible solar cells in energy harvesting, and room-temperature welding of microelectronics components.”

Further down the line, the nanowires -- which are anti-bacterial -- could be used in applications for integrated bio-sensors binding to biological tissue in medicine, he added.

Researchers plan to continue their work to study the mechanical behavior of networks of silver nanowires with the same diameter, as well as how the conclusions of their study can be applicable to different types of metals, Sansoz said.

“It also would be interesting to study the effect of nanowire size on other physical properties, such as electrical or thermal conductivity,” he said.