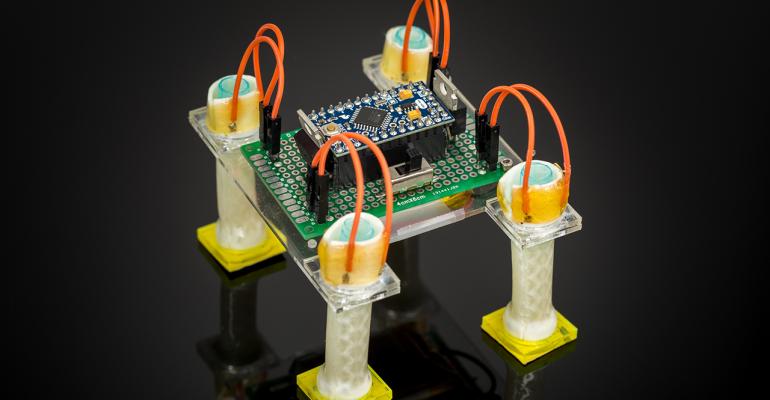 Researchers have developed actuators that can be controlled by electricity to pave the way for less bulky soft robots.

With robots eyed to work alongside humans and perform more complex tasks in the future, researchers have been working to create soft components and actuators that can meet these requirements.

Some of the latest research in this area is from engineers at the University of California (UC) San Diego, which have developed new, tubular soft actuators with electrically controlled movements that allows them to be integrated with small electronic components, they said.

Soft actuators are those that are made from soft materials or highly deformable structures, and their benefit is that they have a higher degree of freedom as well as can have “friendly” interaction with humans, said Qiguang He, a mechanical and aerospace engineering Ph.D. student at the university’s Jacobs School of Engineering. He worked on the project, which was led by UC San Diego mechanical and aerospace engineering Professor Shengqiang Cai.

The actuators the team designed are simple tubular actuators that allow for multidirectional bending deformation as well as homogeneous contraction, he told Design News.

“This unique character enable this tubular actuator can be applied to diverse engineering applications such as soft gripper and walking robot,” He told us.

Battle of the Bulk

While researchers have made significant advancements in developing soft actuators,  they are still controlled by pumping either air or fluids through chambers inside of the components, researchers said. To build robots with these actuators, then, requires the devices to be tethered to pumps, large power sources, and other specialized equipment, which creates bulk and makes them rather unwieldy, they said.

Controlling actuators with electricity allows scientists to build robots that lose some of this bulk, making them more streamlined and user-friendly, He said.

“We can use relatively low electrical potential (1.5 V to 3 V) to activate the large deformation of our soft actuator, [so] we do not require additional bulky pumps, valves, and voltage amplifiers except commercial electrical components like controller and battery, which greatly simplifies the whole system,” he told Design News.

Researchers achieved this by creating actuators from a type of material used for artificial muscles in robots, called liquid crystal elastomers (LCEs) that are composed of liquid-crystal molecules embedded in a stretchy polymer network. These materials change shape, move, and contract in response to stimuli such as heat or electricity, which is similar to how muscles in the human body contract in response to nerve signals, researchers said.

To construct each actuator, engineers sandwiched three heating wires between two thin films of liquid crystal elastomer and then rolled the material into a tube, which is pre-stretched and exposed to UV light.

Key to the actuator’s design is that each heating wire can be controlled independently to make the tube bend in six different directions, researchers said.

When an electric current is passed through one or two of the wires, it heats up part of the tube and makes it bend in the direction of those wires. Passing a current through all three wires makes the entire tube contract, which shortens its length. If the electricity is turned off, it allows the tube to slowly cool down and return to its original shape, researchers said.

To prove their concept, engineers used these new actuators to build two robots—a soft, battery-powered robot that can walk untethered on flat surfaces and move objects, and a soft gripper that can grasp and pick up small objects.